For more information about Japan Nature Guides publications see below:

Common and Iconic Mammals of Japan 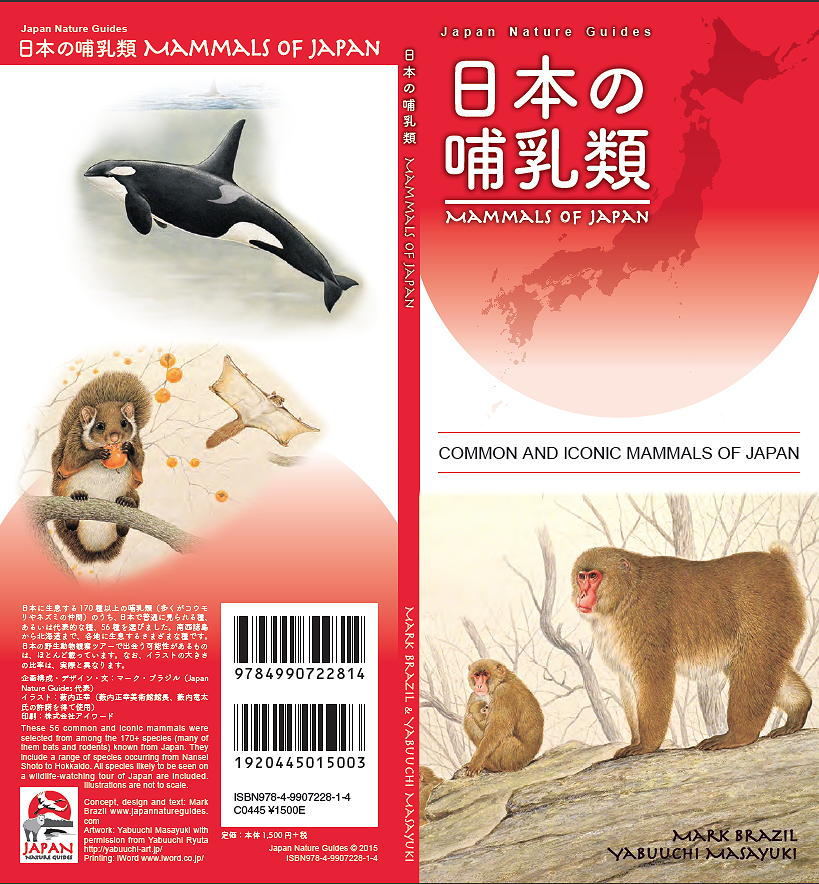 A Pocket Guide to the Common and Iconic Mammals of Japan by Mark Brazil and Masayuki Yabuuchi was published on 1 August 2015 by Japan Nature Guides.

This bilingual guide, covering 56 of Japan's nearly 200 species of mammals, was designed as an easily portable, laminated pocket guide.

A range of common and widespread species, along with a selection of Japan's more iconic and exciting species of mammals, gives an attractive overview of the Japanese mammal fauna.

Ideal when travelling in Japan.

It is beautifully illustrated by Masayuki Yabuuchi.

Common and Iconic Birds of Japan 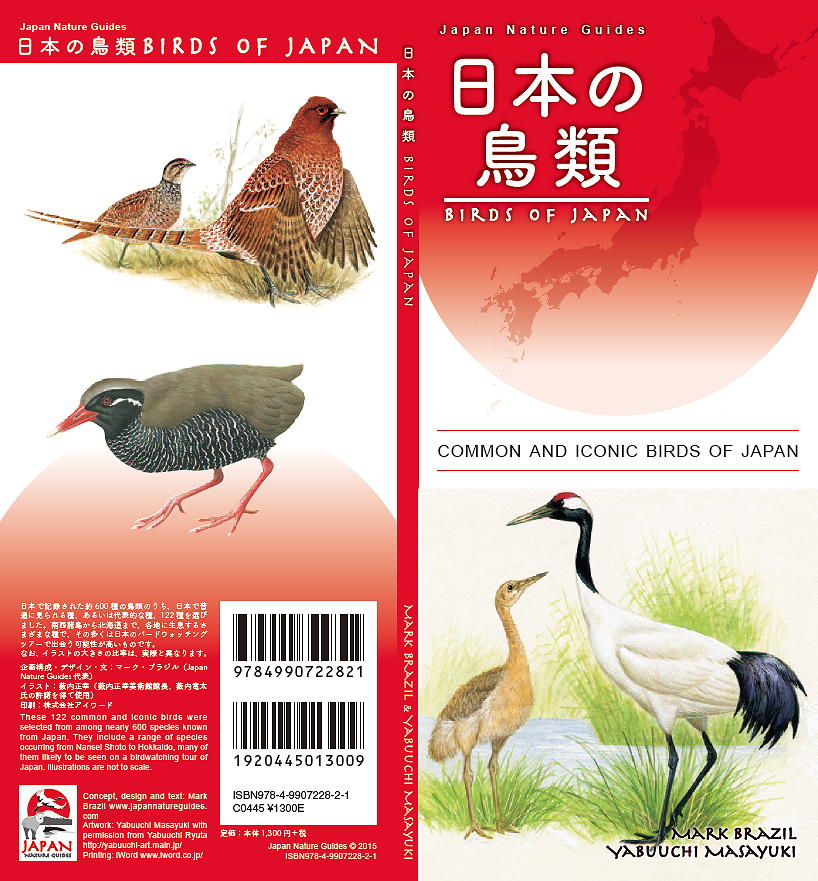 A Pocket Guide to the Common and Iconic Birds of Japan by Mark Brazil and Masayuki Yabuuchi was published on 1 August 2015 by Japan Nature Guides.

This bilingual guide, covering 122 of Japan's nearly 700 species of birds, was designed as an easily portable, laminated pocket guide.

A range of common and widespread species, along with a selection of Japan's more iconic and exciting species of birds, gives an attractive overview of the Japanese avifauna.

Ideal when travelling in Japan.

It is beautifully illustrated by Masayuki Yabuuchi.

The Nature of Japan: From Dancing Cranes to Flying Fish

This collection of Mark's essays published over the last 30 years and edited and updated for the 21st century, provides an overview of the natural history of Japan throughout the year. It is illustrated with numerous attractive line drawings by Masuda Hisashi.

Initially produced through crowd-sourced sponsorship and released to sponsors on 7 November 2013, it was published to the general public in May 2014. It is available directly  from Japan Nature Guides (e-mail mayumibrazil@japannatureguides.com) from various bookshops and sales outlets around Japan, at Hisashi Masuda's exhibitions in Japan, and via WildSounds in the UK.

It has been a long time coming, 30 years in the writing and two in the editing and preparation for publication, Mark Brazil's collection of essays The Nature of Japan: From Dancing Cranes to Flying Fish is now available.

This selection of Mark's nature writings about Japan and its marvelous biodiversity is arranged seasonally and focusses on iconic species found in many parts of the Japanese archipelgo.

The attractive line-drawings are all by Hokkaido-based artist Masuda Hisashi, who has done a masterful job of illustrating each and every chapter.

Copies signed by the author and the artist are available at a special premium price. If you would like a signed and dedicated copy just let us know.

For those interested in knowing the scope of the book the Contents page is given below.

Reviews of The Nature of Japan

"A superb production from every critical point of view. Bravo, Mark!!" .... Peter, Arizona

"I am absolutely thrilled with your book! Everything about it is superb: the delightful foreword by Ian Redmond, the whole general design, Masuda-san's inspired drawings, the many quotations from literature, the font. EVERYTHING!  When I start reading it I just can't put it down. Your writing is so vivid it holds one spellbound, as I have said before. And this is truly a masterpiece." .... Dorothy, Kanagawa-ken, Japan

"What a wonderful volume this is: informative, interesting and stunningly illustrated. It is a please to read and browse through and I am genuinely delighted to have this on my shelves! The writing style is engaging for all levels of reader interest." .... Colleen, Scotland

"Your book is so beautiful and shows so much care and love of subject. It is a real work of art." .... Jane, Texas

"We were thrilled to receive Mark Brazil's beautiful book! Thank you so very much for sending it. I started reading the introduction and the next thing I knew it was a couple of hours later and I was about a third way through it - I just couldn't put it down! It's a really lovely book, so well written yet so easy to read, and he has such a love of nature.".... Marilyn, Australia

The Nature of Japan

"The title of longtime Japan Times columnist Mark Brazil’s collection of essays sells itself a little short, for “The Nature of Japan” is less about identifying the web of life that inhabits this archipelago as it is about offering an insightful peek into the Japanese relationship with the great outdoors.

Brazil has interacted with all manner of creatures during copious expeditions across the country over the past 30 years, and he uses all 380 pages of this book to deliver a fascinating account of some of his more memorable experiences. He also discusses certain changes in environmental impact and biodiversity that he has observed, inspiring us to remember that the wildlife around us should not be taken for granted."

Prologue: A brief walk on the wild side

3: Messengers of the Gods and Mountain Monarchs

Part 2: The Rush of Spring

6: Kimun Kamuy Lord of the Mountains

Part 3: In the Heat of Summer

8: Slippers of the Gods

Of Cherry Blossoms and Concrete

A Birdwatcher's Guide to Japan

A Birdwatcher's Guide to Japan by Mark Brazil was published by Kodansha International in cooperation with The Wild Bird Society of Japan. It covers a selection of the best birdwatching sites from Okinawa to Hokkaido, provides information on how to get there, where to stay and provides lists of key species of both birds and mammals to look out for.

Although it was originally published in 1987 and has long been out of print, it has become a collector's item, yet much that it contains remains accurate and it continues to be used regularly by birders visiting Japan independently.

Japan Nature Guides has a number of signed copies available. If you would like to purchase one for your library please contact JNG.

Currently not available, while a sponsor is sought.

This iPhone App by Mark Brazil is available for download from iTunes. It introduces the mammal fauna of Japan, provides a complete checklist of species found in the archipelago and provides information on a select sample of species.

The Japanese archipelago has a surprisingly rich diversity of mammals ranging from bears, deer and foxes to serows, cetaceans, and seals. The mammal fauna includes endemic, indigenous, and introduced aliens species. In the 'Lite' version, a selection of these species is introduced, along with an overview of the mammal fauna and a complete, up-to-date checklist. In the full version, which will be released later, 50 species will be included and thereafter further species will be added.