A female fuyushaku, whose pheromones lure airborne males to mate. 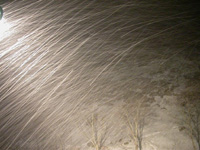 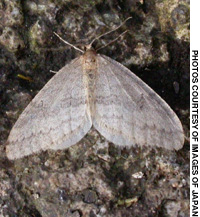 There is nothing quite like writing controversially for stirring up a response, and commonly those responses come as a mixture of extremes.

However, the reaction to my recent column arguing against the proposal to make Shiretoko in northern Hokkaido a U.N.-designated World Heritage Site surprised me, as all the comments have been in support of my perspective (though perhaps those holding the opposite view have just been too polite to take me to task).

In fact after reading your comments, I think several of you should be consulted by the government’s Visit Japan Campaign, so that it might take into account that not everyone appreciates wall-to-wall concrete, especially at globally valued sites.

I first wrote about this country’s love affair with concrete (“Cherry Blossoms and Concrete”) back in the 1980s in an article for BBC Wildlife magazine, and I would love to know just how much concrete has been poured in Japan since then. Certainly most places I visit have noticeably more concrete than 20 years ago, and there seems no end in sight. Surely, one day it must stop — as there simply won’t be anywhere left to cover.

It is to escape concrete and man-made noise that I frequently retreat to the hills, and the contrast there with the lowlands is extreme. The therapeutic value of the beauty and peace of the Japanese mountains is not to be underestimated.

Of course, “silence” can be relative. For some people, a walk in the woods may be silent, though I may tune into a dozen different bird songs and calls. Nevertheless, avoiding visual and noise pollution is now a common part of our behavior, whether by escaping to the mountains, or by tuning-out on public transport with eyes closed and headsets playing personal music systems.

Amazingly (to me), I have encountered some people who do both at once. I have even met people in the mountains who simultaneously are hiking and listening to music or the radio — and not always through earphones. Thankfully, this habit seems not to have spread beyond the hiking fraternity, and birdwatchers and naturalists generally seem a peace-loving lot.

A couple of columns back, I mentioned my thwarted intention to write of hornets, gyuki-mushi, fox shrines, flightlessness and the sex lives of winter moths. In case any of you have been wondering how they can all fit into one story, here it is.

At this time of year a flurry of flakes is hardly anything to shout about (unless you’re in Okinawa!). But cast your mind back to autumn, before the first snowfall had been recorded. At that time I was driving up into a range of low hills in northern Hokkaido. It had been a mild day and snow was not a consideration, yet suddenly I ran (literally) through a flurry of seeming snowflakes. When I slowed to check them out, they turned out to be animate: they were winter moths.

When temperatures dip in autumn, two groups of insects amazingly become active. During the day, one may encounter gyuki-mushi — looking for all the world like tiny flecks of living white fluff. Examine these and you’ll find a tiny aphid (aburamushi) related to the greenfly and blackfly garden pests, but one sporting a white furry coating on its abdomen that renders it particularly conspicuous when it takes to the wing.

During the same season at night, it is the time for fuyushaku (winter moths). Approximately 28 species of these from a dozen genera are known from Japan, where they go by the common names of fuyushaku or edashaku. These moths, which belong to the large family Geometridae, are interesting because neither the males nor females feed. Feeding is the domain of the caterpillars. Adult winter moths exist for one purpose only: sex.

As if finding the right partner were not difficult enough, this particular group of species seems to choose a road less traveled: Whereas the males can flutter in a flurry, the females are flightless!

Day-flying butterflies win hands down in the popularity stakes, but, when it comes to numbers, the moths triumph easily. In Japan, for instance, there are about 240 to 250 species of butterflies, while moths number closer to 3,000!

Despite their lack of color, the winter moths do have a fascinating lifestyle. Their annual emergence is timed for when most deciduous leaves have fallen, which is when the air temperature has already begun to drop significantly. Then, loose clouds of gray-white males may be encountered as they track down their mates-to-be.

These mouthless creatures have an incredible sense of taste. The females produce an identifiable chemical signal, or pheromone, that they emit from their secret hiding place in the sasa (dwarf bamboo) or shrub layer; the males meanwhile are able to pick up this airborne trail and, by circling and weaving, steadily home in on it.

How each female then deals with the host of suitors it attracts is something I have not observed, so that remains for me a mystery.

The very next day dawned bright and sunny, so after a dawn spent with newly arrived swans at Kucharo-ko, I headed for nearby Mount Pinneshiri, with thoughts of “snowstorms” of moths and of swans still in my mind. Not only did that mountain provide me with my first Steller’s Sea Eagle sightings of the winter (see my November column), but it offered up several other visual treats and mysteries too.

The view was splendid and temporarily distracted me from the tiny Inari shrine at the peak. Then, as I brushed through the sasa along the mountaintop trail, I noticed a small grain-like brown object fall from a high leaf. A close search led me to a personal discovery. Several of what turned out to be these tiny creatures were clinging to different leaves in the sasa. They were, coincidentally, female winter moths!

At the slightest disturbance of their chosen leaf, they made no attempt to cling on at all. Instead, they simply dropped down into the tangle of stems and leaf litter beneath. I can only speculate that this is their escape mechanism. With no power of flight, they would potentially be vulnerable to any passing insectivorous bird, but their drop was so precipitate, and the dwarf bamboo and leaf litter so dense, that they disappeared instantly. What an incredible combination of behaviors and habits crammed into one inconspicuous group of moths: flightlessness, sex in the mountains — and a perfume that can draw flying males to relatively immobile females.

The last surprise of the day’s outing was not the sexual antics of these bizarre moths, but an offering at the Inari shrine. Typical of such shrines, this one had two fox figurines and offering-cups at the entrance. Perhaps they once held sake, but, that day, before the stone statues in peaceful repose lay a deceased hornet. Was it coincidence, or had remnant scents of long gone sweet sake enticed the hornet to its final resting place?

A reminder, yet again, that one can speculate endlessly on the mysteries to be found in nature.