This magnificent Steller's sea eagle is one of about 5,000 left in its native Sea of Okhotsk region. | PHOTO @ IMAGES OF JAPAN

Winged wonders of nature -- and more 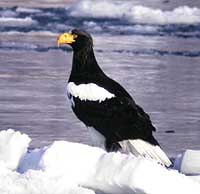 We humans share the world with perhaps as many as 100,000,000 species, yet among the most conspicuous and best-loved of all these are the mere 10,000 species of birds.

Birds are conspicuous, of course, because they are mobile, active, colorful — and because many are highly vocal. But are birds important?

Throughout human evolution, the significance of birds has ranged from being simple calendar indicators to sophisticated cultural icons; from being sources of food and fertilizer to sources of inspiration. But could we survive without them?

The arrival and departure of migratory birds, along with the changes in plumage and behavior of resident birds, serve to mark the changing seasons. Island fishermen use the movements and activities of seabirds to aid them in navigation and finding fish. Among desert-dwelling peoples, birds’ movements are used to indicate the presence of water, and the alarm calls of birds are recognized by some as warnings of snakes and other predators.

Additionally, bird quills helped spread the art of writing, while the feathers served both hunters and warriors as the fletching for arrows. Bright plumages bring additional visual beauty and artistic inspiration to the world, and have been used in human adornment and for clothing since ancient times. Today, nowhere do people rely more on avian adornment than in parts of New Guinea.

More pragmatically, birds today provide invaluable insulation (though not in New Guinea!). Domestic bird feathers are harvested commercially by the ton to be used in the stuffing of millions of pillows, duvets and jackets. There are, of course, other sources of inspiration, of information about the world around us, other fish-finding technologies and other sources of insulation — but birds certainly serve us well in these and many other capacities.

Worldwide, birds have been incorporated in myth and fable, folklore, art and music, inspiring people emotionally and culturally. But how can we place a value on such attributes in an increasingly economized world that requires a financial value for everything? How can we put a price on not having something? Short-sighted humans seemingly must relearn over and over again “you don’t know what you’ve got till it’s gone.”

Take the eagle for example. Eagles have inspired people for countless generations. In ancient Rome, the eagle symbolized the supreme god Jupiter — and victory. So the “victorious” eagle was used to adorn the standards of the Roman legions. Later, Germany adopted the eagle emblem, as did Napoleon, whose troops marched under the sign of that raptor. Then in 1782, the eagle (this time, the bald eagle) was chosen as the symbol of the new United States of America. Today, that same eagle adorns American coins, the emblems of the U.S. president and his armed forces. “Eagle,” too, was the name given to the first manned lunar landing module, in 1969 (hence: “The Eagle has landed”).

However, America’s attraction to the symbolic eagle didn’t stop Americans from persecuting and killing the real birds so enthusiastically that they had to be listed as an endangered species. Thankfully, though, conservation efforts on behalf of the noble bird have now helped its population recover to safety.

Birds, as you can see, are extremely important in human cultural heritage.

Human culture aside, birds are a vital functioning part of the global ecosystem. They are important predators, active in the regulation and control of their prey populations. (We would probably notice their absence most in the rapid increases in insect pest populations — as China did following the Maoist purge of birds).

Birds also serve as prey for other species, providing vital food for those higher up the food web. They are, too, important pollinators and seed-dispersers for countless hundreds of thousands of plant species that could not manage without them. Brown-eared bulbuls, for example, are probably Japan’s most important birds, as they are vital to the regeneration of dozens of tree and shrub species through seed dispersal. As global warming forces plants’ ranges to alter, the capacity of birds to disperse seeds will be of incredible value. Indeed, without them many plant species would face extinction.

Humans have relied on birds for a wide range of services, from detecting noxious gases in mines to controlling insect outbreaks. The important role of insectivorous birds in limiting the growth of insect populations has long been recognized, and has led to some species being introduced around the world as pest controllers. That most of these efforts failed, or even backfired, has resulted more from our oversimplistic understanding of how ecosystems work than on the inability of certain birds to eat insects. Introduced animals are not under human control; we fail to persuade them to eat what we want them to eat. Nevertheless, we can estimate the value of the services provided by native birds in seminatural habitats.

In northern Washington State, forest plantations are susceptible to damaging — and thus costly — outbreaks of western spruce budworms. In the 1980s, researchers there found that birds that eat budworms brought considerable savings in terms of the insecticide spraying required. In budworm outbreak years, bird predators of all types were collectively worth $1,820 per sq. km of forest. The evening grosbeak, however, a particularly effective budworm predator, was alone valued at $800-$1,300/sq. km.

In Europe, where winter moth caterpillars are a costly orchard pest, damaging flowers and young fruit, very recent trials have shown that apple-growers who supplied nest boxes to attract great tits to their orchards were able to reduce insecticide use and thus save money. They also improved fruit yields considerably — by as much as 66 percent per tree, no less!

The potential value from supporting native bird populations in their capacity to help us control pest invertebrates is clearly considerable. It is also largely ignored.