Why do birds of a feather tend to flock together? 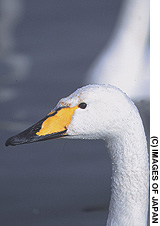 “Flocks” read the sign outside the onsen, or so I thought. My bird brain immediately clicked into “Hey, an onsen for birders.” But why in remote Higashi Mokoto, Hokkaido? Surely it wasn’t “Frocks?” A women-only onsen? But no, men were most definitely welcome. So what, I asked, did “flocks” mean?

I shouldn’t have been surprised that it turned out to be nothing bird-related at all; instead it was really furrokusu, a kana contraction of the Japanese “furo” and the English “relax”!

Well, in their avian sense, flocks are, relatively speaking, also places of relaxation. Have you ever wondered why so many species of fish live in shoals, why many mammals live in herds and why many birds occur in flocks?

Throughout the summer, territorial parent birds spend considerable time and energy in a high state of alert. Not only must they proclaim and defend their territories from others of their own kind, but they must also maintain a watchful eye for predators and disturbance — a state known to behavioral scientists as vigilance. Both predation and disturbance are trouble best avoided — the first is, of course, immediately terminal, but the latter may reduce the opportunities for young to feed and thus reduce their future chance of survival.

Close on the heels of the exhaustion of breeding, many birds must also molt their feathers and migrate — another energy drain. Not surprisingly, then, many species join flocks. Whether it’s shorebirds wandering back and forth with the tide across coastal wetlands, vociferous gatherings of waterfowl at lakes and rivers or flitting flocks of woodland birds, there is greater safety in numbers. Safety in the flock’s anonymity means that each individual bird benefits from a higher overall rate of vigilance — there is always someone else nearby on the lookout.

Less personal time spent being vigilant means more time for other behaviors — such as all-important feeding. During the middle of winter, when wind can lower body temperature in an instant and food sources are dwindling, food energy is a crucial element in the goal for survival.

So what kinds of birds form flocks? Well, a visit to your local neighborhood park or shrine will give you an immediate insight, for among the commonest flocking species are a number that frequent urban and suburban areas in winter, such as Oriental greenfinches, brown-eared bulbuls, gray starlings, Japanese white-eyes, both carrion and jungle crows, as well as the ubiquitous tree sparrows and feral pigeons. There are many more, of course, including those shorebirds and waterfowl that I mentioned earlier.

Flocks serve various different functions depending on the species, the season and the circumstances. For many species they are not merely for safety, but also a place to meet, get acquainted and perhaps find a partner. For some species they are gossipy gatherings where information is traded (or stolen) on where the best food is available.

Among several species of duck, males and females gather in separate flocks, largely avoiding each other and wintering in different areas. Many species prefer to be surrounded by their own kind and are generally found only in single-species flocks, while others will form mixed-species flocks.

Flocks are like parties, and there may be gate-crashers, the stranger in the midst of the crowd that birders are keen to find. Flocks, like that of more than 10,000 white-naped and hooded cranes at Arasaki in Kyushu, often attract something rare and exciting, such as a single demoiselle or Siberian crane.

You only have to consider your own pattern of activities to realize that flocks can exist for very different reasons. Take an outsider’s perspective of a department store’s basement food hall. You could easily assume that all the people there were a related group, spending time together, whereas in fact they are unrelated, but all drawn together by a common resource — food. In such a situation they form a gathering rather than a group or flock, and the individuals will change rapidly over time.

The same is true of other mammals and birds. In some instances mammals gather together drawn by a limited resource — such as at a watering hole, or birds at a migratory stop-over site — in other instances they are true social groups that spend days, weeks or even months together, benefiting from being with one another.

I recall watching a winter-roosting flock of shorebirds in the countryside of Norfolk, England. Oyster-catchers and knot were roosting together in tens of thousands on a shingle bank beside one particular pool. In the darkness I couldn’t make them out properly, but I knew they were there by the sound of them walking back and forth across the shingle — so many birds that the sound was like a bulldozer or gravel.

Recently I encountered a very different kind of flock, a dense starling-like group of attractive waxwings, both yellow-tipped bohemians and red-tipped Japanese waxwings, devouring their favorite sticky mistletoe berries. These exhibited another interesting feature of birds that flock together — very similar calls.

My favorite flocks, though, are those that are always full of surprises — the mixed-species flocks of wintering woodland birds. Here in Japan several of the resident species band together for the winter months and somehow eke out an existence in the cold, snow-covered forests of the mountains of central and northern Honshu and Hokkaido.

Berry-bearing trees are conspicuous, but they are often stripped of their berries by migrant thrushes during the autumn and early winter. By the time the coldest part of the winter is reached, there are rather meager pickings — remnant seeds and berries, hidden insect larvae and even smaller snacks, such as the tiny freeze-dried eggs of butterflies, moths and other insects. As the weeks pass the supplies dwindle steadily, making the task of finding sufficient energy increasingly difficult. Joining a mixed flock may serve to save one’s skin from a passing hawk thanks to the presence of more watchful eyes, but it may also serve to improve foraging efficiency.

Imagine you are among a group of 20 or 30 people, all wandering through a half-empty supermarket that won’t be restocked until spring. As you enter each floor, you don’t know if someone is moving just ahead, snaffling the best food as they go. Moving at random and with no contact with others, you aren’t alerted to the discovery of food, nor can you do the same for someone else. Common sense would say that this method of food-hunting is a waste of energy. Banding together and moving systematically from aisle to aisle, from floor to floor would make much more sense, enabling more people to find more food more efficiently.

What common sense dictates is actually what scientists have found in nature. Mixed-species flocks of small woodland birds, containing perhaps half a dozen species, such as Japanese pygmy woodpecker, tree-creeper, long-tailed, marsh and various other tits, move about the forest not as random individuals but as a loosely coordinated combine harvester. They are secure in the knowledge that they have safety in numbers and that individuals are able to benefit from the discoveries of the group. All things considered, it’s a safe bet to spend the winter in a flock — an individual can relax in a flock, just as an individual can relax in “furokusu.”