What a week that was 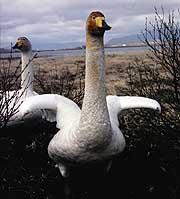 It was a week filled with surprises and excitement.

What started out as a routine long-haul trip across Hokkaido to the Okhotsk Sea coast led to musings on migration and weird sexual practices, thoughts of Alaska and Siberia, and to sightings of endemic alpine flowers and some inspiring avian summer visitors.

It was a week that began with that trans-island trip, made to conduct the waterfowl count I have been regularly doing at Tofutsu-ko, a coastal lagoon between Abashiri and Shari, for several years now in the belief that it’s a far more important place than it’s currently given credit for being.

The same week then involved long hikes, one across the span of the caldera rim at Mashu-ko, another up the nearby dormant volcanic cone of Akan-Fuji and its cheek-by-jowl active neighbor, Mount Me-Akan — all three in Akan National Park.

And in the same week I also plodded nose-down toward the summit of Yubari-dake in search of high-altitude plants — but with an eager ear attuned to the calls of singing Siberian rubythroats.

However, when it came to penning my customary musings on the nature of Japan based on my regular weekend excursions in Hokkaido, I was interrupted by big news (which I’ll get to in a moment).

Just before that, I’d like to set the record straight: Though my editor (and perhaps he’s not alone) is convinced that all I do is gad about the natural world, reveling in wildlife sightings and writing about them for The Japan Times, alas, that is far from the truth. In fact, like most academics, I spend most of my time chained to my desk, my eyes glued to my computer screen, or trawling endlessly through student reports.

Weekend excursions provide soul food for sanity (and material for writing). I have been more in need of them than ever of late. If there are any would-be book authors out there, I have words of advice for you — get a life instead. Having just spent the best part of every spare moment this spring checking the publisher’s proofs of my most recent manuscript, this one on swans, I can honestly say that there are much better ways of spending one’s time!

Swans, though, are fascinating creatures, and it was fun writing about them — it’s just the endless rewriting and checking that was tedious.

Even the humdrum lives of the whooper swans I have studied contain some oddities. Did you know, for example, that up to 70 percent of the population, at any one time, doesn’t even bother to breed? That’s a far cry from the image of wintering birds rushing north to Siberia to breed quickly in the short sub-Arctic summer. Well, some do make the rush and the effort; the rest just . . . sort of hang out. Not a bad life, it seems, unless you are bent on passing on your genetic legacy somehow.

In recent years I have encountered the occasional summering whooper swan here in Hokkaido, usually on the far reed-fringed side of large, somewhat remote lakes and lagoons. Once or twice I have encountered pairs, hanging about as if attached to a potential summer territory. I have wondered whether they might not breed here somewhere; after all, in the last couple of decades they have bred for the first time in a number of countries in Europe, and introduced birds have recently bred in North America, too.

With that said, I was now going to get back to the big news, but before I do there was a second almost-as-big news item of the week that I should relate, since it pertained to the very swans my book is about. One of my students rushed in clutching a copy of the June 9 edition of the Hokkaido Shimbun, exclaiming that a pair of whooper swans was breeding at Utonai-ko near Tomakomai. Utonai-ko has become something of a refuge for a number of birds with shattered wings, and that they might entice a healthy bird to remain and nest has long been on the cards. This year it happened, and the eggs hatched. What a dilemma for the parents. Will the parent capable of flight migrate away with the cygnets next spring — or will they all stay in Hokkaido and start a local population?

So here we are, finally, back to that first big news item, which came in the form of another front-page article, declaring “the first-ever spotted sandpiper for Japan!” A test for birders when in its non-breeding plumage (distinguishing it from the regular common sandpiper [iso-shigi] that occurs here is by no means easy), this one was smartly spotted, its chest covered with black dots, rendering it immediately recognizable.

How I wish I could have seen the bird itself, rather than just in a photograph. This long-distance migrant normally travels between North and South America, between points as far apart as Alaska and Argentina. It has wandered accidentally to many countries in Europe, though mostly those along the Atlantic rim, and is presumed to have also visited Africa.

However, the recent sighting here in Hokkaido constitutes not just a first for Japan, but I believe a first for Asia as well. Perhaps it overshot mainland Alaska and island-hopped along the Aleutians and the Kuriles, or perhaps it has been wandering the Asian coast for some time and was on its way back north. Either way, its arrival was amazing, though not quite unexpected: It was included in a list of birds in my 1991 book, “The Birds of Japan,” that I predicted would appear here.

The spotted sandpiper is a bird I have always wanted to observe on its breeding grounds, for this is one of those strange creatures that exhibits reversed sexual roles. It is the female that takes the lead, and though they do not have the reversed plumage patterns of the Phalaropes (those shorebirds in which the males are drab, and the females brightly colored), these sandpipers share the same sexual orientation. One female mates with as many as three or four males, lays a clutch for each, then leaves the males to care for them.

It’s amazing the options birds have experimented with in adapting to their various habitats. I wonder if the whooper swans that are nesting this year will lead to a whole new adaptation — year-round residency in Japan.