Waiting with ravens for hunter and hunted to die 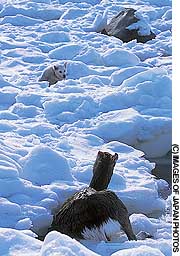 Nature Diary notes for Friday, Feb. 8: Lake Kussharo to Notoro Misaki, then along the Sea of Okhotsk coast to Utoro.

A mild winter’s day for east Hokkaido. The temperature fell to only minus 4 overnight, and during the day it reaches plus 2. A year ago I flattened my car’s battery after a night at minus 25 degrees by Lake Kussharo — the oil had thickened too much for it to start.

Began the day at the source of the Kushiro River, where nearly 100 whooper swans were roosting around a small area of water not frozen over where the river flows out from the lake. Mist rising from Kotan hot spring made a beautiful misty backdrop for dawn photographs.

Later, traveling north along the lakeshore, I see three families of swans in the forest, feeding on dwarf-bamboo leaves protruding through the snow. Only the second time I have seen this behavior.

Off Cape Notoro it’s an Arctic scene. Fleets of pretty harlequin ducks bob among the drifting ice floes. Further out a small flock of black-and-white long-tailed ducks give haunting “a-aoh-na” calls. Otherwise, only three seals show their snouts occasionally above the glassy water between the floes. Had hoped to find a rough-legged buzzard here this winter; no sign. The usual wintering Arctic rosy finches were dividing their time between foraging on the cliffs and gorging on seeds put out on the snow by the little coffee shop near the cape.

All day a watery sun promised brightness, but never quite achieved it. However, moving eastward along the coast, I find a fox sunning itself outside its den. Then, continuing along the coast beyond Shari, I keep my eyes peeled for eagles. The sea ice is close to the shore here, with little sign of open water before the horizon. Oshinkoshin waterfall was a surprise — almost completely flowing, whereas in previous years it has been almost completely frozen. Evidence of the very much milder winter this year here in the north.

By 1:25 p.m. I reach Kanayama Bridge at Shiretoko, 12 km southwest of Utoro. Movement caught my eye. Pulled over to investigate and immediately spotted three magnificent Steller’s eagles and a pair of white-tailed eagles overhead. Their circling suggests there might be prey nearby. Scanning nearby trees I first heard, then saw, ravens. After a while I located what was attracting them: a deer carcass at the base of a tree. Lots of sika deer here. Probably a natural death, as I think this area is within Shiretoko National Park, though it could have been shot outside and then wandered in. Either way, the carrion feeders are in evidence.

Thought I heard another noise while watching the ravens and eagles. Wandered back up the road scanning in all directions; realized the noise was coming from below, near the river mouth. Eventually found the source of the commotion — two feral dogs, one off-white, the other orange-brown, almost the color of a fox. But what were they barking at? It took me a while to maneuver into a position to see clearly through the trees, then I saw it — a female sika deer. Why doesn’t it move, it looks fit enough? All I can make out at this range is that the dogs seem to be circling it as it rests on a block of sea ice just off the beach. Strange; why doesn’t it run off?

It was 2 o’clock, and I decided to investigate. Strapped on cross-country skis, and broke trail through the woods, eventually reaching the slope down to the river mouth.

The sound has changed. No barking now; instead a whining, crying sound, repeated over and over. The brown dog flees from me across the ice at the river mouth. Feral dogs like these are a curse. They hunt wildlife, but are not native. It would make so much more sense if wolves were here like the small ones that once lived in Hokkaido. I wonder if we will ever see them here again? A worthy candidate for reintroduction, though it will probably never happen.

The moaning is now louder; a terrible heart-rending sound. A creature in dire distress, but surely not the deer. Now I can see the hind again. She is down; not shot, but stuck in the freezing water where she must have slipped off an ice floe. The small floating ice patches are not stable enough for her to climb out. Blood runs down her face. She turns her head mutely and I see her left ear has been bitten off — those damned dogs no doubt.

It’s the white dog whining — I see it now. Just a few meters from its victim, it’s struggling. It too is down — its hindquarters stuck deep in a crack in the ice, its rear half in icy water. It pants, its eyes wide, screaming. “Serves you right,” I want to tell it. The erstwhile predator squeals and whines like a frightened child; the former prey now still, eyes staring, quiet; in shock. Her struggles bring her to the brink of the hard ice, but each time she slips back into cold, deep water — more shock.

There will be a death here, perhaps two. No need to visit Africa to witness predator-and-prey struggles. Death is a drama wherever it occurs. Further out on the ice, 15 or so eagles wait. They perch on ice blocks pushed high by tide and currents. Around them wait a mixed flock of thick-billed crows and ravens. Are they already awaiting the inevitable death?

I find myself cruelly disinclined to help the dog — it shouldn’t be wandering free anyway, and I don’t have a gun to put it out of its misery. The deer I feel more sympathy for; the victim of a non-native predator. Deer are common along this coast, and the carrion feeders rely on them. One more seems destined to be theirs soon.

Not wishing to help the dog, and not able to help the deer, I read death in its silent eyes; force myself to contemplate the inevitable. Is death a taboo subject because we fear it, or because we see so little of it?

By 4 o’clock, the light is already fading as the short winter day comes to its end. The hind has sunk back into the water again. Nine crows and one raven have found her. No sign of the dog. Has it slipped beneath the ice? Did it somehow drag itself clear? I had hoped it would be carrion food. Instead, the carrion birds are taking turns at its injured victim. One at a time they hop onto her back pecking fur from her flank, pecking at her bloody ear. They’ve opened a new wound beneath her right ear now. They are feeding on her even though she is still alive. An occasional flinch and flick of her head drives them away, but only briefly. Will her death come as a result of innumerable small wounds, or from shock, or the cold? Will more dogs come?

Her only hope lies in early nightfall. If the crows go to roost soon; if the rising tide pushes the ice ashore; if she can struggle free, perhaps she may survive the night in the forest. If. But I feel death stalking here. In the morning there will be another carcass along the shore for the eagles, the crows and the ravens to fight over. Remove the feral dogs from the equation and it’s a natural scene, a natural death, but damn those dogs (and their owners for releasing or abandoning them) for causing it.