Viewing wildlife through a lens 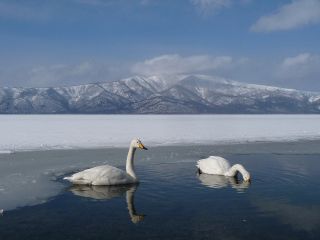 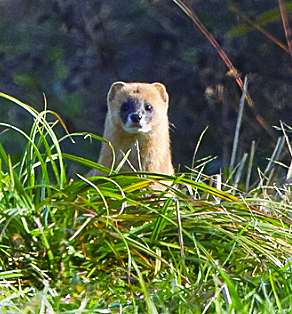 I grew up in Britain, which is a crane-free zone, so from the very first time I arrived in Japan I was dreaming of seeing the iconic red-crowned cranes of Hokkaido. How much more iconic as a crane can you get than being dubbed Grus japonensis? But just how was I to learn about their haunts and habits?

Through tremendous good fortune, I met composer, poet and translator Dorothy Britton, who had written the text for “The Japanese Crane: Bird of Happiness,” and she kindly provided me with an introduction to Tsuneo Hayashida, the photographer of the book.

Armed only with that link, my binoculars and a tremendous keenness to learn anything and everything I could about that magnificent bird, I set off for Hokkaido in early December 1982. On that first of very many meetings, the most recent just a few weeks ago, I was to spend two whole days in the company of Hayashida, doyen of Japanese crane photography.

It was a marvelous time spent watching those magnificent birds, navigating and learning many back roads and byways around Kushiro Marsh, and watching a master of the art of wildlife photography at work. It was an image of Hayashida’s, of a pair of displaying cranes, that was used to adorn the previous incarnation of the ¥1,000 note. His work has appeared around the world in prestigious magazines such as National Geographic, and he has gone on to photograph all of the world’s cranes. He was an inspiration to me and led me to write about and photograph the cranes myself.

In Japan, over the last 30 years or so, it has been common for photographers to take on a theme and pursue it exclusively. The late Teiji Saga did so regarding the Whooper swan, which he followed the length and breadth of the country with his Hasselblad camera. Masahiro Wada belongs to a younger generation than Hayashida, but he too has taken to cranes with a passion; others meanwhile focus their attention on macaques, squirrels, deer, bears, tanuki (raccoon dogs) or foxes in a way that Western photographers tend to eschew. Many favor photography in the open, while in other countries wildlife photography from hides and blinds has been the norm.

Roll the clock forward 30 years, and almost all of us have now transitioned from film to digital photography.

And Japan, a country once difficult to travel around as a naturalist, has now become far more accessible, with foreign-language guide books on just about everything, including where to go birdwatching (I am personally guilty with my book “A Birdwatcher’s Guide to Japan”), where to go hiking — and web-sourced local information, from maps and weather to satellite images, not to mention a plethora of wildlife images to whet any traveling photographer’s appetite.

Indeed, so improved is access and information that now every year photographic groups visit from Europe, America, Taiwan and Korea, and some of these are led into the field in search of images by friends and colleagues, and myself, too.

Unlike many of their Japanese contemporaries, these visiting photographers train their lenses on almost anything that moves, or even doesn’t move. They are clean slates for imagery and desperate to “shoot” it all — after all, they rarely have more than two weeks in the country. Armed with high-speed cameras and high-tech lenses, for many of these visitors, shooting several thousand images a day on tour is not unusual. Put them close to a subject in good light and they are happy.

A much rarer breed is the non-Japanese photographer resident in Japan. With a different cultural filter, a broader focus, and time on their side, such photographers open a different window on both familiar and unfamiliar subjects.

One who does just that is John Wright, an Australian who is now resident in Kyushu. John has been interested in wildlife since he was 7 years old, and he’s been involved in photography since he was 10. When his family was posted to Papua New Guinea for two years during his youth, John’s budding interest in birds was further whetted by sightings of several species of birds of paradise — an experience that has remained inspirational for him.

Years later, in the early 1990s, he came to Japan to teach English and to experience Japanese culture. However, he became increasingly involved in photography and spent most of his time shooting landscapes with cultural and natural history themes. Then he gradually started to become more engaged in bird photography, partly because of his love of birds and the considerable challenge they offer the photographer, but also because in many parts of Japan they are the only readily visible wildlife (so many native species of mammals here are nocturnal).

John has also lived in Thailand for five years, where he took every opportunity for nature, wildlife and travel photography, but he returned to Japan in 2008 and has since concentrated almost exclusively on wildlife photography — and bird photography in particular. John lays no claim to being a professional nature photographer (and only very few can make a living at that occupation), but he is most definitely a very serious amateur/semi-professional developing an enviable knowledge of southern Japan.

John’s photography credits include shots in the “Lonely Planet Guide to Japan” (1991), and in books and newspapers during his time in Thailand, including a bilingual “Lamphun Travel Guide,” another book about Lamphun commemorating the 60th anniversary of the Thai king’s coronation, and The Nation (an English-language newspaper). You can follow his work on his blog.

John epitomizes the active naturalist — describing, just as I would, how every trip out to photograph or watch wildlife is an adventure, no matter how distant or close to home the location; there are always surprises — unexpected species, behaviors or photographic opportunities.

As John has put it: “If there is anything I have learned it is to always stay alert and never be complacent. I don’t know how many times I have almost given up and gone home, only in the next second to have one of the best experiences of the day!”

In the last year, John has been rewarded with opportunities to photograph several of his dream species — including the copper pheasant, Amur falcon, black-faced spoonbill and Chinese egret — although I rank his bottle-nosed dolphin shots as of particular interest because sightings of these creatures are rare enough, let alone good photographs of them.

During 2011, John plans to tackle more of Japan’s nocturnal mammals. He has set his personal bar very high in wanting to photograph Japanese bats in flight. I wish him well and have high expectations. I think we are going to see much more of his work in the future.