Yours truly with much-loved Genesis bins a-dangling darkly during a field trip to Kussharo-ko Lake in Hokkaido. 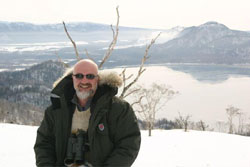 BIN THERE; SEEN THAT

I began writing natural history notes back in 1968; the immature handwriting in my first dogeared notebook is a reminder that then I was just a lad of 13. I was growing up in semi-rural Worcestershire in central England, and that was the year when, asked by my parents what I would like for my birthday, I requested the biggest single-volume book on birds that was available at the time: “Birds of the World.”

I had begun my natural history explorations on foot and by bicycle, using binoculars borrowed from my father. Those binoculars saw me through the early phase of my growing passion for wild birds. They were a pair of 8×30 standard-prism binoculars (that means they were 8-times magnification, with an objective lens diameter of 30 mm) that my father had picked up cheaply during a business trip to Belgium; they were made in Japan.

That pair of binoculars saw more wear in the first year of my birdwatching career than my parents could ever have dreamed of. Soon I was ready to graduate from them to a slightly more upmarket pair of Swift 8×40s. Despite being a U.S. brand, Swift was a company that used imported optics, and I feel sure that those, too, originated in Japan.

The basics of birding

Those early binoculars helped me learn the basics of birding, even though they failed miserably to cope with Britain’s notorious climate, and the lenses and internal prisms were forever fogging up in the damp and rainy weather. For sure they were at the low end of the market pricewise, but they were the best I could afford, and Japan made good cheap stuff back in the 1960s.

Moreover, according to my parents, birding was just a phase I was going through. That belief led them to refuse my begging for a telescope — but that’s a different story, so let’s stick with binoculars.

Broadly speaking, there are two different types of binoculars. One type uses standard prisms, and hence they have rather bulky, angular bodies to accommodate these light-angling glass blocks. Then there are binoculars with slimmer roof prisms built into straight tubes, which at once simplifies their style and shape — while improving it no end.

By the early 1970s, I had become aware of roof prisms. Not merely aware, but every time I bumped into other birders who had slimline, straight-through bins (birding slang for binoculars), I was coveting them. The only two companies in the field to my knowledge back then were both German — Zeiss and Leica — and for no apparent reason, other than they took the fancy of a young teenage lad, I had set my heart on a pair of the legendary Zeiss 10×42s.

Although it was years before I could stretch to a top-end pair, one day fairly soon after that I became the proud owner of a black, rubber-armoured pair of bins, and sporting them around my neck I thought I was the “bees-knees” (that’s English English for “creme de la creme”).

Of course, since the computerized world hit us all squarely in the face and made us aware of how the ravages of time (i.e. about six months!) dull the competitive edge of any product, whether software or hardware, we have become inured to the inevitable need to buy the latest. But I am talking about a time before computers, a time when I still believed that if you bought a pair of binoculars with a 30-year guarantee, it meant that you wouldn’t dream of replacing them during that time.

That was until Leica came along with a whole new concept — gas-filled, fully waterproof bins! Go out on a stormy day at sea, get them covered with salt-spray, then wash them off under the tap back at home — no problems! Something else to dream of, but I was a Zeiss man and anyway I couldn’t afford to switch then.

When you travel as much as I do, and when you rely so much on one particular item of equipment for all your work, it’s essential to have backup, so through the 1990s I dabbled here and there, trying out the bins that friends favored. For a while I carried a somewhat bulky pair of Nikon 8×35s as backup to my trusty Zeiss pair; then I began to covet Bausch & Lomb’s new rival to Zeiss (but more because the birding world’s late great Phoebe Snetsinger used them); next I graduated to a lovely pocketsize pair of lightweight Leica 10×25s that were invaluable at everything from Eric Clapton concerts to the Taj Mahal — and for mountain hiking and birding in between).

Then came the big day in the late 1990s when I finally decided to upgrade my primary pair and, using my research fund, I lashed out on a pair of those tremendous gas-filled Leica 10×42s. Of course, almost as soon as I did that, a relative newcomer into the top end of the binocular market, the Austrian company Swarovski, began making waves with a new range of excellent optics that were comfortable in the hand (though heavy on the wallet). Birding friends had them, I wanted them, but my Leica pair had come with another multidecade guarantee.

As I deliberated, first Leica then Zeiss fought back in the market place; when Leica brought out their new models I realized that my 10×42s were rather bricklike in comparison; when Zeiss brought out their new range, decision-making became even more difficult. But then I went back to my trusty old Zeiss 10×42s, and I was impressed all over again and wondered why I had bothered to upgrade and change makers. So I thought: Well, perhaps I’ll stick with these after all.

For the last few years the top-end binocular market has been something of a three-horse race: Zeiss, Leica and Swarovski (all European) dominated. Now it is time to rethink all that. Entering the race, and seriously challenging the Austro-German supremacists, is a Japanese manufacturer — Kowa Optics. They have unveiled a new series of waterproof binoculars and telescopes to challenge (and I’m going to stick my neck out and say, even beat) the very best that Europe can offer.

Will the optics race follow the luxury-car market, with Japanese manufacturers beating the Europeans at their own game?

Only time will tell, but for now my Zeiss and Leica bins are mothballed, Swarovski doesn’t have a look-in with me, and instead I am using two great new Kowa models. For serious, heavyweight birding — i.e. long days in the field, which can become hard on the eyes — I am now a smitten fan of the Genesis line (10.5×44). These not only have fantastic light-gathering capacity, but they are pinpoint sharp and so comfortable in the hand that you forget they are there.

Put through their paces

I put them through their paces recently while watching Blakiston’s fish owls after dark, and while watching swans from a steaming hot outdoor spring — brilliant in both situations.

Meanwhile, for my frequent travels, when I need to cut weight even further, me and my Kowa 10×32s are now inseparable. They are powerful enough for any birding situation, and with 10-times magnification, their small size, lightweight alloy construction and very comfortable green rubber armoring and broad neoprene neckstrap make them just ideal for me to carry on mountain hiking/birding trips whether in the Azores, Kamchatka, Mongolia or Venezuela (and they will be the bins I will be using on trips to all of those destinations this year).

At the top end of the optical market, Kowa is a very serious challenger, striving to become the best in a very competitive field. You can’t go far wrong with any of the top makers, as they all deliver top lenses, but when it comes to comfort and practicality in the field, my new Kowa models put all my old bins in the shade.

If you happen to be in the market for a new pair of binoculars, I suggest you try out all of the top-end makers and models. Perhaps you’ll favor the Kowa Genesis range, as I do, but then give serious consideration to the very reasonably priced Kowa 10×32s and 8×32s.

When it comes down to it, cheap binoculars become very expensive as you replace model after model over the years, so it actually works out cheaper to buy the best as soon as you can — and hold on to them.