" /> U.K. birders' fair shows we can all help save even LBJs - Wild Watch | Japan Nature Guides

Making a point: One of many art works at BBWF, this kingfisher with a fish was made from dumped shopping carts recovered from waterways that are the bird's habitat. | MARK BRAZIL PHOTOS

U.K. birders' fair shows we can all help save even LBJs 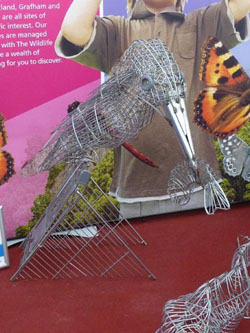 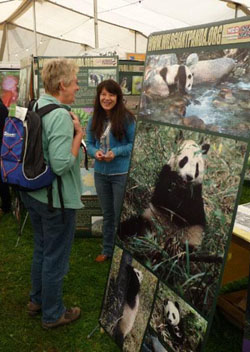 “Life works by making lots and lots of different kinds of living things, and every one we lose impoverishes us and the world. Every single species, obscure or common, funny or dull, gorgeous or LBJ [the bird-watchers' abbreviation for "Little Brown Job"], is a strand in the web of life: every time we break a strand, we bring the web closer to busting. Every species matters.

“The diversity of life is not a challenge or a problem, or a conundrum: it is the basic structure of life. It might be a good idea not to break any more strands then.”

So wrote the renowned British journalist and author Simon Barnes, in the official program for this year’s British Birdwatching Fair. Barnes is a modest speaker, but his subject matter is compelling, and he writes just as he speaks. Personally, I would have added an exclamation mark after the final “then,” because it feels like he needs to shout it out loud enough for all to hear.

Losing species isn’t just a matter of a casual “whoops, shame about that.” It is more a case of a gut-wrenching “Help! What will the ramifications be, and can we survive them?”

Of course we are all worried about our own individual survival — but this isn’t really about individuals. There’s no point quibbling over your own individual pay at work if the enterprise that employs you is just about to follow General Motors into the scrapyard of history. As Barnes would a trifle inelegantly put it, that’s just as stupid as “pissing into the wind.”

No; losing a species should set off all of bells, whistles and alarms like nothing else, as it takes us one step closer to the brink of individual and collective doom. That’s because if we lose our functioning ecosystem, we lose our own life-support system — and how more serious can things get than that?

About 22 years ago, two guys, Tim Appleton of the Leicestershire and Rutland Wildlife Trust in central England, and Martin Davies of the Royal Society for the Protection of Birds, decided that rather than “fiddling while Rome burned” they wanted to do something to alleviate the plight of endangered species to try to stop things getting worse.

As birds were their thing, they decided to do what they could to help prevent any more bird species from slipping into oblivion. So, in 1987, they organized a little fundraising event they named The Wildfowl Bonanza at a place called Rutland Water in eastern England — and two years later the British Birdwatching Fair (BBWF) was born out of the Bonanza’s great success.

Nowadays, the annual BBWF is a classic example of an enormous oak tree that has grown from a tiny acorn. Anyone who, like me, went along to one of the early fairs, tucked away on farmland in the middle of nowhere, eastern England, would be hard put to recognize the event it has now become. But I am getting ahead of myself.

The idea of the fair was to draw together all sorts of people involved in some way with birds: to stage lectures, quiz shows, events, displays, to have media celebrities, to have artwork exhibits with the artists there, to showcase photographs of birds, and so on and so on . . .

Those showing at the fair would pay for the space, and that revenue would cover the expense of setting up the temporary infrastructure of the fair itself. Visitors would buy day tickets and the ticket price would be the profit, which would be channeled toward specific bird- conservation projects.

The theme of 2009′s BBWF was “Lost and Found” — with proceeds once again going to the BirdLife Preventing Extinctions Programme.

Worldwide, of the 190 bird species currently classified as “critically endangered,” 45 have no known population and require intensive searches to establish whether they still exist so that efforts can be made to protect their habitats. As BBWF’s Martin Davies has said, “Preventing the extinction of species is a test of whether we are delivering conservation.”

I was fortunate enough to be able to participate in this year’s fair, over the weekend of Aug. 21-23 — and what an incredible weekend it was. The sun shone and the crowds came. The final figures haven’t been released, but I am guessing attendance figures will set new records by surpassing last year’s 20,000 total.

I was there at the behest of Tokyo-based Hankyu Travel International, helping to promote Japan as a destination for those with an interest in natural history, especially birds. That task aside — which kept me busy the entire time I was there — it was impossible to walk around the fair and not be astounded by it.

This year’s BBWF featured eight huge marquees, one more than when I was last there in 2006, and since when one had doubled in size. The fair followed the same overall pattern as in the past, but with more of everything. There were artists who work in wood, stone, metal and more traditional oils and watercolors; there were photographers; there were bookshops and stalls selling sound recordings; representatives from lodges and travel agencies were there catering to globetrotting birdwatchers; and there were outdoor outfitters’ booths and displays of optical equipment to suit every budget — including binoculars, telescopes and the necessary tripods on which to mount them. As well, there were talks on every subject imaginable relating to birds from around the world, and book-signings by authors (including myself).

While Friday set a new record for attendance, it didn’t stand for long as it was overtaken on the Saturday. Sunday was much more relaxed, more of a family day with many events especially for children — after all, the future of our world lies in their hands, so if they can understand from an early age the need to take care of their surroundings, we can have some hope.

The BBWF is a major attraction, not only for birdwatchers, but others who enjoy outdoor pursuits and families looking for an interesting day out.

Over the 20-year history of the fair, it has attracted tens of thousands of people from around the world and raised more than £2 million ($3.2 million) for conservation of the world’s most threatened birds and habitats.

The whole feel of the place is almost overwhelmingly dynamic, and as busy and as packed as a shopping mall on a Sunday. I noticed impressive stands from Ecuador, Finland, Papua New Guinea, the Philippines, Rwanda, South Africa and Sri Lanka, to mention just a few of the countries represented.

Amazingly, there is no other fair like it in the world. While small regional versions exist, they attract just a few hundred, perhaps a thousand people at most. So, if you are planning a visit to England next summer, do include the BBWF in your schedule — not just because it is an amazing event in itself, but because its great goal is that absolutely key one of conservation.