The massive creche of fur seals on the beach at Tyulenii looks intimidating from a distance - and little better when viewed close up. 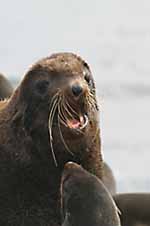 It felt as if we were an invading force as we set the bows of our black rubber zodiac boat for the shore. Tyulenii Island, a raised tableland of sandstone barely a kilometer long and less than half that wide, was our target. Winds blowing up the Sea of Okhotsk were pushing a rising swell along the unprotected eastern coast of Sakhalin and past Tyulenii, and we were setting off into it. Waves were crashing as surf onto the beach, and onshore, we could see the “army” awaiting us.

From our low vantage point in the zodiac, the massive creche of fur seals onshore looked intimidating. Would they prevent us from landing? Would they even launch a mass attack? I had visions of several hundred boisterous fur seal pups, each weighing perhaps 10-15 kg, deciding that our rubber boat would make a fun object to play on, and rushing us in a gang.

Turning our zodiac in the surf was going to be impossible, so once close we would be committed to a landing, regardless of the reception that awaited us. Our driver cut the outboard engine, we surfed a wave onto the beach, and leaped ashore clutching paddles and staffs, ready to deter irate animals.

We needn’t have worried at all. The nearest of the youngsters backed off and the movement passed through the herd like a wave. It was like the biblical parting of the Red Sea. One minute we were faced with a beach filled with seals, the next there was a broad swathe of empty space in front of us — a seal-lined pathway leading to the hotel.

Well, I say “hotel.” This was a Soviet-era construction built on a whim after a politician just happened to visit one calm sunny day — a rare event on Tyulenii. Built and abandoned almost in the same instant, it has never seen a paying guest. Now, rotting slowly, it receives thousands of nonpaying guests annually.

Common murres favor the rooftops when they return in their thousands to their colony in the spring. Crested auklets delve into any open nook or cranny deep enough to nest in. And then there are the fur seals. . . .

Having seen the island last year in June, before the bulk of the fur seal population had arrived to breed, I was astonished by its transformation in early September. Fur seals, numbering more than 15,000 according to Olga, our Russian Fish and Wildlife Service colleague, had overrun the island — and the hotel.

A gang of adolescent males rather fancied themselves as kings of the steps running beside the hotel, and had turned them and the steps leading up to the entrance into a slick, crumbling slope.

There is a polite term for the accumulation of sloughed fur, skin and deposited feces that with the passage of time and thousands of bodies becomes polished into the rock surface until it is inseparable from it — “fur seal marble.” It does indeed bear a strange resemblance to a smooth gray marble. On Tyulenii, fur seal marble was everywhere, but particularly on the upper sloping tableland of rock where the majority of fur seals had taken up residence.

Once we had established a beachhead, we had to secure our position by clearing a safe path to the observation blinds. For a few minutes, there were adolescent seals scurrying away from us, rushing in waves to the beach — then a few minutes later, we were scurrying away as a gang of vigorous males, each measuring nearly two meters long and weighing close to 200 kg, headed in our direction.

Disturbed from their morning nap, they were probably only looking for the shortest way to the sea, so we beat a nervous retreat and allowed them to cascade seaward. They took no notice at all of the creche of pups that we had so nervously nudged along. And despite all these comings and goings, one young pup still lay curled up tight, fast asleep on the sand.

We nudged it awake gently, and as it stretched up and blinked enormous, perplexed eyes at us, it was impossible not to anthropomorphize it. Putting words into its head, I imagined it thinking: “Where’s everyone gone?” — and, just possibly, “What are these strange creatures that stand up?” When it looked around and saw its buddies all at a safe distance, it soon shuffled off to join them, leaving the middle portion of the landing beach bare.

A short walk up the steps brought us to the cliff edge and the observation blinds, allowing us to look over the island and the full sweep of the seal colony. It was standing room only up there, but thanks to a carefully built fence, we were able to witness one of nature’s amazing wildlife spectacles.

The entire island was covered with life and all the action played out to a steady background of grunting and roaring. From a vantage point near the island’s northern end, I was amazed to find that I could see four species of seals. There were the chocolate-brown fur seals, packed so densely onto the beaches of Tyulenii that they resembled the human hordes soaking up the rays on the Shonan coast of Kanagawa Prefecture on a sunny Sunday. Clustered at the furthest tip of the beach were larger animals that were a tawny orange-brown; these were Steller’s sea lions. Then I noticed a group of pallid animals lying at the water’s edge like a row of giant maggots — these were spotted seals. The fourth species was represented by just one individual, also by the water’s edge — it was a diminutive ringed real, looking very out of place among the larger darker masses.

Tyulenii is a fabulous place — a reminder of how prolific nature can be. Sadly it is, too, a reminder of how much Japan has lost. Northern Japan also once had fur seal and sea lion rookeries and haulouts. Today these creatures are long-since lost, like so many seabirds, too, to the ubiquitous, merciless, coastal fishing nets.