Bearing down: A full-grown male Brown bear powers into the sand with his front left leg on the shores of Geographic Harbour, Alaska, to catch a clam he has detected there. That area, within Katmai National Park, is reputed to have the world's largest population of Brown bears.

Tuning in to Alaskan bears 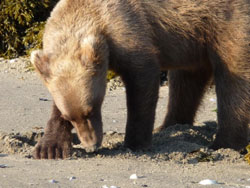 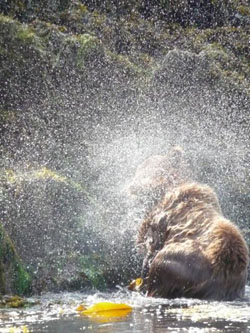 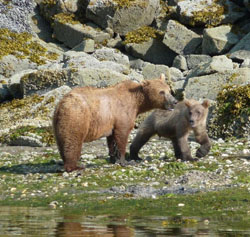 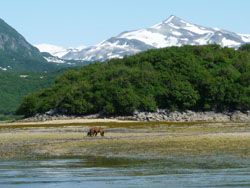 Katmai National Park's awesome Brown bears were wondrous to behold on a trip there this year.

With temperatures falling steadily, amazing things are happening in the natural world.

Among plants, insects, birds and mammals there are so many different strategies for coping with the cold season that my head spins trying to grasp them all as wildlife sightings change week by week.

I saw my last Asiatic chipmunk of the year some weeks back — they are hibernating now — yet Red squirrels are still active in my local woods. Meanwhile, as geese and swans moved south, so winter moths appeared. Flying squirrels sleep intermittently, occasionally appearing in winter, but they are more lethargic at this time of year, and while many other species such as deer, serow and foxes remain active, both of Japan’s largest land mammals — its Black and Brown bears — are slumbering deeply now.

I have a soft spot for bears: Their behavior is fascinating; they are awesome in their strength and size; and they are indicators of wonderfully wild places.

I was fortunate in that my last extended experience with bears, late last summer, was in one of the most remote and scenically beautiful places I have been to. T he eastern sky was graying toward dawn as our ship approached a wonderfully sheltered anchorage in Geographic Harbour, tucked away on the Alaskan Peninsula.

Soon after dawn our fleet of Zodiac inflatable boats with outboard motors was dropped into the water and we set off exploring and searching for wildlife.

For years, I had been intimidated by the thought of “driving” a Zodiac, but these extremely seaworthy, high- powered black rubber dinghies are an essential part of expeditionary travel, and having finally “bitten the bullet” and learned, I now love driving them.

Standing in the stern gives the commander of a Zodiac a superb view with great opportunities for spotting wildlife, and also allows for immediate changes of course to approach the goal within a safe distance. One of the most fantastic opportunities they afford is in being able to approach the kind of wildlife from the water that it would be foolhardy to approach so closely on land — I am thinking bears, of course!

Nearly hidden in the far reaches of Amalik Bay, Geographic Harbour is in southern Alaska’s wonderful Katmai National Park which, at over 19,000 sq. km, is roughly the size of Wales. It is ringed with spectacular peaks from which several rivers drain into this shallow harbor. Access is through a narrow entrance, and pursuit of the harbor’s top mammal is tide-dependent. The waterside woodland, the tidal flats and the river mouths of the “harbor” are all excellent habitat for Brown bears (Ursus arctos), and it was expressly in search of them that we had made our way there.

As dawn broke we dropped our flotilla of Zodiacs into calm waters and began exploring the bays and inlets of the harbor as the stunning Katmai scenery unveiled itself. The rugged peaks around the bay were dramatic, and the mountain cirques were draped in gray ash and pumice still remaining from the 1912 Novarupta volcanic eruption (the most powerful eruption of the 20th century) in Katmai, making the mountains appear as if they were clad in extensive gray snowfields. Beyond the nearer mountains, higher peaks were draped in glaciers glinting in the low-angled sunlight.

Cruising slowly just offshore in our Zodiacs, we sought out bears along the exposed mud flats. Katmai National Park is reputed to have the world’s largest population of Brown bears, so we had high hopes of seeing them, and exploring by Zodiac was the perfect way of searching for them and approaching them safely.

For nearly three hours before breakfast we cruised slowly along the shore, but we just couldn’t get enough and made two more excursions — another in the morning and then again in the late afternoon, each time for two hours. All three trips — with the stunning scenery as a breathtaking bonus — were resounding successes because, right from the start, bears were spotted. In fact by breakfast time we’d seen at least a dozen, and sightings continued throughout the day.

With as many as four bears in view from a single point, it was hard to know in which direction to look. Cruising in quietly I was able to station the boat just offshore, all the while watching and learning the way my more experienced colleagues handled their craft.

I learned when it was wise to cut the motor and drift, and when to pull out the paddle and keep us in place with a few silent strokes. Thanks to the spectacular scenery alone, the whole experience would have been great fun, but with bears close by on shore and the chances of close-up photography it had all the atmosphere of an adventure safari.

Soon, all my passengers were watching bears and snapping pictures of them as they foraged along the shore, giving us opportunities to observe their behavior in some detail. For the most part they seemed completely oblivious to our presence, despite our close proximity. In reality, though, they knew exactly where we were and occasionally lifted their heads to keep an eye on us. But for them the draw of delicious food was stronger than any other response.

I was intrigued by the way they approached the tidal flats. They walked so purposefully along a few paces from the water’s edge. Then I realized that buried clams occasionally squirted jets of water into the air, and these must have been the triggers that set off the bears. I watched time and time again as a bear lumbered to where a clam had squirted, pushed down powerfully with a forefoot, then commenced digging. Meanwhile, as some bears dug out clams, others were chasing salmon swimming up the river — but the highlight of the day for me was seeing mothers foraging and resting with their young, playful cubs.

But you don’t need to travel to Alaska to watch bears and other mammals.

Bear-watching opportunities exist in Hokkaido during the summer and autumn months, and in Japan’s northern isle there are also seals and whales to look for, while in Honshu and Kyushu there are monkeys, serow, flying squirrels, raccoon dogs and all sorts of other creatures to observe.

Do let me know of your own most exciting mammal sightings here in Japan — and don’t forget my photo challenge of taking great wildlife shots at a local park, beauty spot or tourist magnet. Try and keep within an hour’s distance of your home; be creative, think behavior, think unusual angles or focus on patterns; zoom in on fur, scales or feather details, or unusual creatures, and let’s see the results.