Trekking back in time among Okinawa's fronded wonders 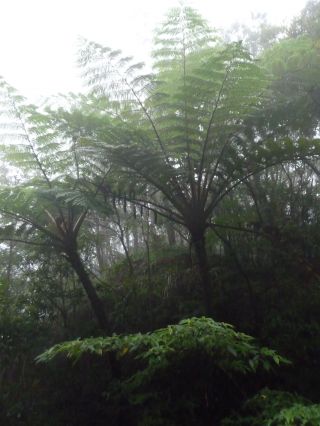 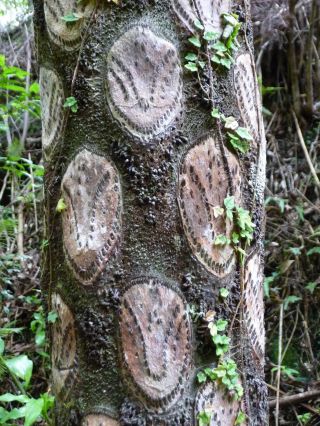 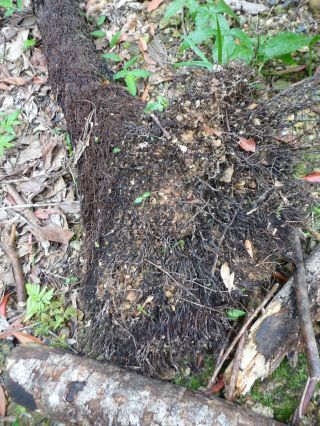 A heavy fog hangs around the forested area of Yambaru in the northern hills of Okinawa. On this rainy-season morning in June, there’s a steady dripping all around, though what I can see of the sky is cloudless. Instead, this “rain” is droplets that the trees have garnered into their canopies from the clouds, and which they are now dispensing earthward. The smell in the air is of damp moldy fungi and the rich loamy scent of tropical greenhouses. The humidity is high and my glasses are steaming over.

The forests of Yambaru are rich in both broadleaf and evergreen trees, though they all seem to share the same canopy height. It’s as if they have been shorn to a uniform sward with a giant mower. Their shiny, leathery leaves snatch at every photon, while the forest floor beneath is cast into deep shade.

Here and there, the pale creamy-colored flowers of a camellia tree break the green monotony. The forest sounds are bewildering; the insect chorus is unfamiliar to my ears attuned to nature’s noises in Hokkaido, and I wonder if I am mistaking some for frogs — or are they frogs that sound like insects?

I’m here to look for endemic birds — black-chested Ryukyu Robins, maroon-colored Pryer’s Woodpeckers with almost ivory-colored bills, slate-gray and silver-striped Okinawa Rails with yellow-tipped red bills — but in the thick damp mist even the brilliant green of endemic Ryukyu Green Pigeons is hard to discern. They are the only birds on show, perching in the dead snag of a tree. Though they are clearly visible, none of their plumage features can be seen in the poor light and I cannot even tell that they are green. Only their distinctive silhouette pemits identification.

No other birds show themselves, though a woodpecker taps loudly nearby, the dull light, mist and dense foliage providing it with a convenient dark cloak of invisibility.

Continuing up into the forest, though, it’s as if night is falling rather than day breaking. I notice a log lying beside the track. It is the ideal place for a robin to perch, but I have no such luck.

About 2 meters long, it is immediately obvious that this dark trunk does not belong to a tree. It lies with all its black roots exposed, and unlike any trees I know they are short and more like thickened hairs than the woody subterranean “branches” supporting most tree trunks. Instead, they form a beardlike clump at the base, as if this plant once stood on, rather than in, the topsoil.

Confusingly, the fallen trunk seems at once both fibrous and woody. Large irregular patches of sandy-colored scar tissue of a different texture form a distinct pattern up its sides. It is those scars, generally oval-shaped, and the fibrous roots that mark this out as definitely not a tree, despite it being treelike. Meanwhile, from its lack of spiky protuberances covering the trunk, neither is it a Cycad — though there is something similarly primitive about its appearance.

A little further on, a similar trunk stands drunkenly leaning from a bank beside the track. It is crowned, again somewhat Cycad-like, with a mass of long fronds, the bases of which are covered with fine brown hairy scales. No branches arise from the scarred trunk, and several of the crown fronds hang lifelessly, their soon-to-fall bases clearly the source of those distinctive scars.

However, it is the standing fronds that testify to this being a member of another ancient plant group — that of Japanese tree ferns (not to be confused with the Japanese Fern Tree, which is an entirely different kind). Other tree ferns are standing nearby and some have the unmistakeable young “fiddlehead” fronds they share with the trunkless ferns. Young tree-fern fronds uncurl, first along the rachis and then laterally, and these long, elegant uncurled fronds have earned it the name Flying Spider-monkey Tree Fern — whether Cyathea lepifera or a close relative.

As with the Cycads that grow in exposed areas on the rocky cliffs of the Ryukyu Islands, these tree ferns have an ancient aspect placing them more at home in a 200-million-year-old Jurassic theme park than a contemporary forest.

Though fossilized tree-fern trunks dating back to the succeeding Cretaceous Period — which lasted for 70-odd million years from around 138 million years ago — have been found as far north as present-day Hokkaido and Sakhalin, they have long been extinct in those more poleward regions of Japan.

Today they are confined to subtropical areas of forest on Amami Oshima south of Kyushu in Kagoshima Prefecture, to the Ryukyus and to the Izu and Ogasawara islands out in the Pacific way south of Tokyo, from where they’re administered. Elsewhere, they thrive in some southern-hemisphere zones, and are abundant in New Zealand.

Tree ferns are not flowering plants. Instead of producing blooms and seeds, they alternate asexual and sexual generations. Mature tree ferns are in reality asexual sporophytes, their large fronds (which are their leaves) not only photosynthesize, but also bear sporangia — spore-producing structures — underneath. When the atmosphere is suitably dry, fully developed sporangia split open to unleash countless miniscule spores, which are carried away on the wind — as happens among more typical ferns too.

If spores make successful landfall in suitably rich and moist soil, they quickly develop into what is called a prothallium. This is the gametophyte — the small, sexual phase of the tree fern, which produces male and female organs containing gametes. Sperm from the male organ (antheridia) of one prothallium swim into the female organ (archegonium) of a nearby prothallium. There, sperm and egg fuse to form a single cell, or zygote. Using the prothallium as its initial energy supply, this embryo grows into the new sporophyte generation — producing the plant’s roots, “trunk” and leaves.

Mature tree ferns can reach heights of more than 20 meters, although those growing in Japan tend to be lower. Their starburst crowns add an architectural quality to the forest that is both immediately distinctive and pleasing to the eye — especially in the dull light of a misty morn.

Although the endemic birds I was searching for that June day did not reveal themselves, my walk in the forest on the flank of 503-meter Mount Yonaha was an inspiration in shape and form; a great chance to examine how various growth specialties coexist and interact.