Thrills on the hills 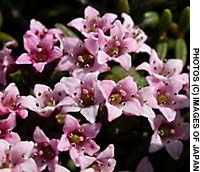 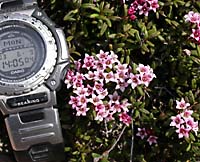 It happened again. Underfoot was the crunching tephra of Akan Fuji, black tinged with orange; it stretched away on either side of me, an arid, seemingly sterile environment. I’d zigzagged my way almost to the skyline and the distant view was opening up. Behind me to the north lay the cone and constantly steaming caldera of Mount Me-Akan, a 1,499-meter peak in the Akan National Park in eastern Hokkaido. To the south, the lowlands were a deep green; forest vanishing into the heat haze. I could hear olive-backed pipits downslope giving their little rush of song, and knew that if I turned suddenly I might catch them in their delightful “parachuting” display.

My thoughts wander as I walk. Sometimes I reflect on other mountains; other times, images of wildlife encounters come to mind until some sound or sight intrudes to bring me back to the moment.

There, it happened again — suddenly I was thinking of Iceland. There I was on a mountaintop in Hokkaido, and thoughts of Iceland had crept into my mind. I took a closer look at the scene around me; just off to the side of the trail I saw the hint of pink that had set off that Icelandic train of thought. In among the barrenness of the volcanic debris was an insubstantial cluster, a soft cushion of tiny flowers, and it was they that had made me think of Iceland.

Nestled behind a rock was a prostrate plant, an alpine known as dwarf azalea (Loise leuria procumbens). However, it’s not a dwarf merely in the sense of being small, because it is truly miniature and delicate — like a distilled and concentrated version of the larger, showier plants that also go by the name azalea.

In fact, though, it’s an azalea in name only, as it rightly belongs with the heathers, the Ericaceae, rather than its namesake’s Rhododendron genus. As much as I enjoy the brazen splashes of color the azaleas bring to Japan’s forests, it is the delicacy of loiseleuria that gives me an indescribable thrill every time I encounter it.

The very first encounter I recall was in Iceland. I was a young researcher at the time, excited by the northern environment and visiting that country for the first time to study swans. As I plodded to my study area across an open moorland — as close to true tundra as I had seen at that time — I found myself noting tiny splashes of color among the drabber grasses and sedges. Passing the same way day after day, they became familiar faces and I began to put names to them, my first-ever alpine plants.

I learned to distinguish vaccinium (that would produce rich, plump berries in autumn) from empetrum (that produced tiny, blacker fruit), and empetrum from phyllodocem, with its tiny white flowers like miniature globe lanterns.

Then finally I found loiseleuria, its tiny starburst blooms pale pink against the dark-green foliage of the mat-like patches of leaves. So exciting was that first recognition that now each time I find it, whether in Alaska, in Chukotka or in the mountains of Japan, I am momentarily transported back to Iceland. Along with the visual images of that Atlantic island’s dwarf azaleas, my mind then also conjures up the plaintive, fluting sounds of golden plovers calling from their moorland territories, of smart, black-bellied dunlin trilling from the wetter hollows, and gaudy yet delicate red-necked phalaropes with needle-fine bills picking at aquatic insect larvae. It’s a momentary thing; when I catch sight of the delicate hint of pink of the star flower, I see Iceland — then I am back in the moment.

How extraordinary that the very same species occurs here in Japan, in the mountains of Honshu and Hokkaido, and be as instantly recognizable as it is in North America and in Europe. This is a fully holarctic species, occurring on the northern tundra and at higher and higher elevations further south, because the alpine zone is a kind of tundra, and because plants adapted to one are generally adapted to the other.

This is a plant that thrives under tough conditions, where the soil provides limited nourishment and where even pollinators may be scarce. Human eyes cannot even see the way this species advertises itself, because it uses ultra-violet. If you’d like to see it the way that insects can, then check out the Web site www.naturfotograf.com/UV_LOIS_PRO.html

The dwarf azalea is a truly circumpolar arctic-alpine species. It can be found almost at sea level in the far north, but also at up to 3,000 meters in the mountains. Its tiny, elliptical leaves provide a dark, evergreen backdrop for the pale-pink blooms that cluster two to five to a stem. The whole plant is barely a few centimetres high, and its blossoms a mere 4-5 mm across.

Take a hike this summer in the Japanese Alps, or the mountains of Hokkaido, Kyushu or even Yakushima, and you will find yourself among the stranded. These tundra-loving plants are marooned here on the upper slopes of alpine summits. When cooler glacial times pushed ice and snow further south, and to lower elevations, such plants had wider ranges here, around the lower slopes of the mountains. But as the planet has warmed since, so they have retreated, with the shrinking alpine region, upward toward oblivion. There is nowhere for them to go past the peak.

Still today, many of Japan’s mountains provide a climate similar to that found at lower elevations further north in eastern Russia, and some of the wildflowers that grow here may be familiar if you are from northern Europe or northwestern North America. Their flowering season is a short one: The alpines begin their show in June as the snow disappears, and by August they are mostly done.

It pays to be small up there in the alpine zone. Ground-hugging habits and diminutive size protect precious buds and stems from the worst weather, while growing in dense cushions and having stem hair helps to cut windchill and generate a microclimate within the plant clump. Dark colors, too, enhance the absorption of solar heating, and most flowering plants up there are perennial as the growing season is just too short for most annuals.

So short, in fact, that you should grab this chance — and go to the mountains now before it is too late.