The solitary Siberian crane that brought a special sparkle to a late-winter birding trip to Kyushu last month, and which is now likely seeking out its breathen somewhere over the Asian steppers.

The wonder that is winter 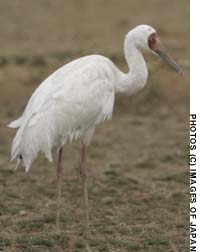 The seasons have a powerful effect on me, which perhaps explains my need to anthropomorphize and personify them. Temperate Japan’s six distinct seasons roll on inexorably: spring, rainy, summer, typhoon, autumn and winter. Though battered and bruised by the perceptible effects of global climate change, they continue to retain an essentially predictable pattern.

My favorite is winter, because it strikes hard and cold, long and dry, in the area of Hokkaido where I work. Also because it is as different as could be imagined from the drab, gray, damp winters I experienced in England during my boyhood.

In northern Japan, winter has all of the promise and atmosphere of the “real” winter so powerfully evoked in Arthur Ransome’s “Winter Holiday” (translated into Japanese as “Nagai Fuyu Yasumi”), when England’s famous Lake District was visited by Jack Frost week after week until the lakes froze over and Arctic adventures were possible.

Arctic adventures are a regular feature of my life in winter in Hokkaido — occasional winter camps, regular cross-country skiing trips — tempered, of course, with dips in hot springs from which it’s also often possible to watch wildlife. But this February I traveled south from Hokkaido, where winter still reigned supreme, to southwest Kyushu, where unseasonal warmth drove the thermometer to over 20 degrees.

If temperature was the only trigger, then the gatherings of birds that spend the winter in Kyushu would have already set off northward for their breeding grounds. Thankfully, though, daylight and day length are more important indicators to them, and the gathering of cranes at Arasaki was more impressive than ever. Their numbers peaked this year at more than 12,000 birds — a fourfold increase since I first visited them a quarter of a century ago.

As in previous winters, various other species were attracted to the gathering; there was a scattering of common cranes (inappropriately named for this part of the world), and a dash of sandhill cranes from Chukotka adding spice to the hordes of hooded cranes and white-naped cranes — though picking them out from the crowd was not for the faint-hearted. However, the telescope that was required equipment to do that was quite redundant for the star of the show. This winter a solitary Siberian crane, the rarest of the cranes occurring here, graced the gathering — bringing the day’s total of wild crane species to five, a feat probably impossible anywhere else in the world.

This stately white bird, though easy to spot, seemed unwilling to accept a back-row position. As I approached its feeding area, it took wing with a small group of other cranes, flew closer still, and even after landing proceeded to walk gracefully in my direction. They were seemingly as desperate to be photographed as any catwalk model (though how many of them sport a red face and yellow eyes!) Responding to signals too subtle for us to recognize, the Siberian crane then took its leave northward a few days later, just before the end of February. It can only be hoped thatsomewhere in the steppes of Asia it may reunite with its brethren.

Day by day now, the crane flock in Kyushu will be dwindling, and indeed perhaps all have already gone, migrating north as spring is ushered in.

Though the Japanese cranes of Hokkaido make no such long-distance migration, and though winter there will linger for another month, they too are responding to the changing seasons. The pairs are dancing more frequently, driving away their young of last year and making preparatory visits to their breeding grounds, where they want no interference from their nearly full-grown offspring.

Whereas the start of winter is filled with promise (the woods change character, the squirrels, foxes and deer become more conspicuous, and serow can be easily spotted), and the depth of winter is challengingly severe, requiring determination to don skis to track wildlife, the end of winter is almost entirely lacking in character.

In the south, of course, winter’s hold is brief and snow scarce. But in the north, snowfalls only recently powdery and dry become heavier and wetter; the snow falls and melts, falls and melts instead of building steadily into a pack. The humidity rises, and there is a hiatus. Winter has loosened its grip — but spring has not arrived. The drabness is retained for far too long, until eventually the flurry of blossom and spring beauty arrives. There should be a word to describe that drab winter’s end period of the year — any ideas, anyone?

In England that desultory spell, limited merely to March and April in the north of Japan, seems endless, spanning the months from October until April. It’s the only time of year I dread there, when the winter blues become a tangible experience of dullness, lethargy and depression. It’s a depression only relieved by the therapeutic bursting energy of spring. But in England “spring” one day can turn back to “winter” the next, so unpredictable is the weather.

Nothing for me can be more evocative of this dull period than smoke spiraling from a leaf-piled garden bonfire rising in swirls into a smoke-gray sky, as rain (or could it be snow?) threatens.

My travels south to Kyushu and Honshu were meant to be brief forays before yet another lengthy journey around east Hokkaido, camera in hand. But well-laid plans changed swiftly as urgent need led me to England for March.

There the end of winter was in full swing, but on a rare sunny afternoon I revisited a reservoir that was one of my boyhood haunts. There I found things little changed. I found my field notes written on the same March day exactly 34 years before when I had made a similar visit, and felt caught as if in some perverse time-loop of nature. The same place, the same birds, the same drabness. But there in the midst of it all I witnessed the perennial passion of spring; that innate longing for renewed life that excites so many species as the days lengthen.

Goosander are large, fish-hunting waterfowl, that are not common in the west Midlands of England. A mere two weeks earlier I had seen an astonishing flock of more than a 1,000 of them on Lake Suwa beside the highway from Nagano to Tokyo, and before that a smaller gathering among the ice at Toufutsu-ko in northeast Hokkaido. At “my” Midlands reservoir I witnessed a swimming “red-head,” a female goosander extend her neck and beak until they lay along the water’s surface, her body low and long. Around her swam a primped-up male, resplendent in his faintly pink-hued white, posturing and preening, not sure about her expectations. His posturing lasted many minutes, their eventual mating mere seconds, but in that brief act the promise of spring ahead was confirmed and the winter blues began to lift.