The law of cavity: Rose-ringed parakeets are spreading in Tokyo and may one day nest in the gardens.

The green heart of Tokyo 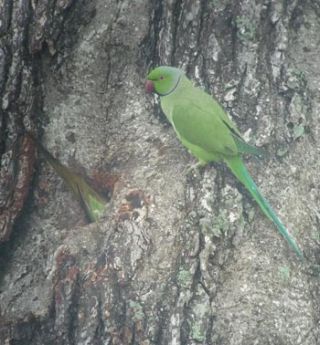 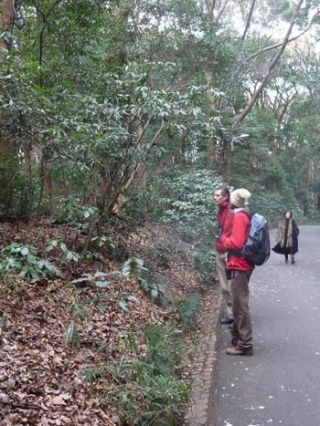 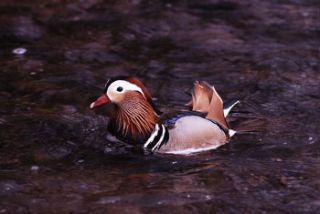 An unexpected whickering whistle had me mystified. I circled, trying to pinpoint the direction it was coming from, and puzzled over its origin.

It became clear that its source was quite high in the trees. There was something vaguely woodpecker-esque about the ringing call, yet something somehow kitelike too, and a strange chattering even had me thinking of squirrels.

What on earth could it be?

Eventually I spotted movement on a high branch, positioned myself where I could obtain a clear view, and the mystery was resolved.

It was definitely avian; however it was not one bird calling, but two, and they were by no means typical calls. I had in fact encountered a courting pair of Northern goshawks, and they were engaged in early-spring conjugal rights — despite it being only Jan. 16.

Had I been in a montane forest in central Honshu or Hokkaido in March or April, I would have been less surprised by the behavior, though equally as confused over the identity of the sounds as they were completely new to me. But I was in Tokyo — admittedly in its great green heart, but Tokyo nonetheless.

After their lengthy vocal display and subsequent brief copulation, the goshawks flew off, taking different routes between the trees. A few flicks of their short, broad wings between trunks, a few jinks and glides between branches, and they were gone, leaving only a memory of their unusual nuptial chorus.

Over the last 60 years, as Tokyo has sprouted great and towering concrete structures, and as traffic has swollen and clogged its conduits for movement, quiet havens within the city have become fewer but ever more important. Nearly a century ago, plans were drawn up for what time has turned into an extraordinary oasis, literally a green heart amid the city: Meiji Jingu and its extensive gardens.

The mature woodland, visually dominated by broad-leaved evergreen trees, also supports a wide range of deciduous trees and shrubs and even bamboos and palms; the latter always strike me as incongruous whenever I see them while there’s frost on the ground, as I did this January.

Throughout the year, the gardens present splashes of color. And even in winter, when at their most monochrome, they sport colorful sazanka (sasanqua; Camellia sasanqua) preceding true tsubaki (camillia; Camillia japonica) to delight the eye and attract nectar-sipping birds such as white-eyes and bulbuls. Broad gravel paths lead visitors onward around the garden, with occasional expanses of short-cropped grass, and even open water, breaking up the potential monotony of endless woodland.

Soon after sighting the goshawks, I found further signs of biodiversity in the form of fresh molehills on the lawns and a dry, translucent cicada nymphal test still clinging to a garden post. The split down the back of this fragile casing revealed where an adult cicada had emerged sometime last summer from the skin of its last nyphal instar — in time, perhaps, to contribute to the buzzing chorus that attempts to drown out the city’s sounds.

The sound-muffling capacity of the forest is a great boon, providing a peaceful haven in which to contemplate nature, watch birds, or join the legions of photographers passing through during winter intent on photographing the Mandarin ducks that grace the shaded pond near the north end of the garden, towards the Yoyogi entrance.

It is fitting that this oasis of nature in the city should be the “natural” buffer around the city’s most famous Shinto shrine, Meiji Jingu. Japan’s ancient animism, with its countless kami (deified spirits) representing a harmonious link between man and nature, is seen at its most ritualized during January, when visitors crowd the nation’s shrines — with millions thronging this one in the heart of the capital alone — to welcome the new year and wish for an auspicious 12 months to come.

Meiji Jingu is dedicated to Emperor Meiji — the subject of the epochal Meiji Restoration of 1868 that replaced the Tokugawa Shogunate which had ruled Japan with a firm, feudal hand since 1603 — and his consort, Empress Shoken. Meiji Shrine is a lasting legacy of Japan’s capacity for modern change coupled with its attention to historical precedent and its ancient nature-centric religion.

Following the passing of Emperor Meiji in 1912, and of his empress in 1914, more than 100,000 trees from all over Japan and from overseas were donated and planted to create a forest in their memory. Construction of the shrine in Japanese cypress and copper began in 1915, and it was completed in 1921.

Officially established on Nov. 1, 1920, the shrine building would now be 90 years old had it not been destroyed by U.S. bombing during World War II. In the event, reconstruction was completed in October 1958, making it a further monument to Japan’s capacity for renewal.

Today, the forested grounds of the Grand Shrine support some 170,000 trees of nearly 250 species and are home to various mammals and birds somehow able to survive in the heart of one of the world’s great cities.

Fortunately, the throngs of new year visitors, the unremitting daily parade of tourists, the countless wedding parties and celebrants of all sorts passing beneath the immense wooden entrance torii typically take a short route to and from the main shrine building located in the middle of the garden. As a result, while many hundreds of thousands of people follow that route each month, the narrower peripheral routes are less commonly walked and provide the best opportunities to enjoy the natural side of the city.

Here, in winter, subtly shaded Pale thrushes are to be found fossicking among the leaf litter — occasionally joined by their scarcer and larger tiger-striped cousins known as White’s thrushes. Where there is shrubbery or other dense ground cover, Black-faced and Grey buntings are much in evidence during winter, while in the trees above them — sometimes, in winter, in mixed-species flocks — common woodland birds of Japan, such as the Eurasian nuthatch, Eastern great tit and Varied tit, can all be found.

A relatively new addition to the city’s avifauna can also be seen these days in the vicinity of the shrine. Introduced to Japan from South Asia as a cage bird, but now well established in the wild through escape or release, the Ring-necked or Rose-ringed parakeet favors large urban trees that provide the cavities necessary for them to nest in. Loud chattering calls overhead are a giveaway to their presence. Perhaps one day soon they will begin breeding in the gardens here — they are already doing so in other parts of Tokyo.

However, the most attractive birds here during winter are undoubtedly the Mandarin ducks. Drawn by the evergreen oak woodlands that provide plentiful acorns (a major food source for the ducks), and the shading, overhanging vegetation around the pond that allows them to roost in relative seclusion, these ducks are now a colorful winter fixture in the garden — the males flaunting gaudy orange whiskers and sail-like wing plumes, while the females are demurely dressed in mottled grays and browns. On cold winter days, they can be found lined along the shadiest sections of the pond bank, or perching on logs and branches. In summer, they retreat from the city to even more secluded riverside forests in the mountains of Honshu.

For human visitors, however, the gardens also make a wonderful summer retreat from the heat of the surrounding city — though this is a place not to be missed on a visit to the city at any time of the year, if only to escape the rush and noise of intense urbanization.

Meiji Jingu can be easily reached from JR Harajuku Station on the Yamanote Line or Meiji-Jingumae Station on the Fukutoshin and Chiyoda subway lines. The shrine gardens make for a wonderful quiet haven, especially early in the morning. Opening and closing times vary from month to month, because they follow sunrise and sunset. Details of access and features of the garden can be found on the shrine’s website at www.meijijingu.or.jp/english/index.html.