The changes that come what may 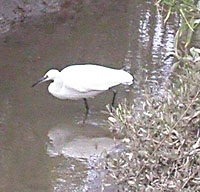 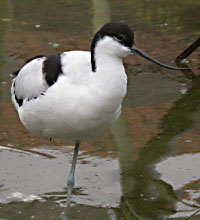 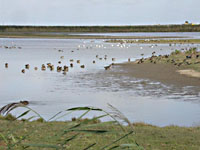 The arrival of just one dramatic, even devastating, typhoon, storming to the center of the seasonal stage like a massively overblown diva with a case of bad timing, is enough to signal autumn is on its way. This year the global signs of the season change have been untempered in the extreme. Hurricanes have been blasting Florida repeatedly, and Asian typhoons have rampaged so far north that they have even plowed through western Hokkaido, felling swaths of trees. Simpler signs of the times are here too: the faintest hint of mushroom on the cooler morning air; the fading of the last of the summer flowers; the abundance of ripening berries; the disappearance of the brightly colored summer flycatchers; and the brief resurgence of song among our resident birds.

An early and reassuring reminder of the impending return of autumn comes with the garrulous gatherings of starlings. Our native gray starling (muku-dori) is a sociable creature once its breeding season is over. Family parties gather in flocks. They chatter and squawk, following each other in loose mobs, descending on berry-bearing trees like an avian combine-harvester, clustering on roadside wires like bizarre up-pointing fruit, and swarming noisily into communal roost-sites each evening like hornets into a hive.

Reassuring seasonal patterns are one thing, but the rampant extremes we are increasingly exposed to, are another. An Austrian friend tells me how they can no longer rely on a white Christmas; skiing starts there in January, not December. Winter rains in the European Alps, which run off rather than accumulating as snow and ice, lead to summer droughts, lowered river levels and problems for river navigation. Huge areas of China are also facing severe summer water shortages as major rivers run dry there.

Where weather is concerned “expect the unexpected” has become the most relevant catchphrase. We miss the myriad minor impacts of such climatic events as they are played out at scales below our normal focus, but imagine the impact that the drying up of rivers has on freshwater fish, and other river life, or that tree-felling winds have on fragile migratory butterflies and birds. We simply cannot fathom what percentage of our summer birds succumb to such storms, or how many butterflies are blasted out to sea to die on the back of such winds. Nevertheless, not knowing in quantitative terms doesn’t mean it isn’t happening.

Returning to familiar haunts after a prolonged absence can be a mistake; friends may have left, or changed, their lives moved on, but a long-term perspective on a place can also trigger further understanding of nature’s capacity to adapt and change.

I returned recently to England for a brief visit to an area of the north Norfolk coast, where I had last lived eight years ago, and where I first visited as a schoolboy and as a student in the early 1970s. Thirty years ago, the conservation management of wetland habitats was in its infancy, but efforts were being made to protect rare and vital marshland habitats and the species that live there.

I remember with tremendous excitement, traveling to a special island reserve in the coastal marshes of neighboring Suffolk just to see the bizarre avocet, a striking pied shorebird with blue-gray legs and an elegantly up-tilted bill, at its only British breeding grounds. Its rarity and exotic appearance were the appeal, but little did any of us budding naturalists of that era realize that within 30 years it would have colonized the entire Suffolk and Norfolk coasts! Many of Britain’s common garden, farmland and woodland species have been in decline over the last 30 years (as have Japan’s too), but not so the avocet.

Britain’s astonishing number of amateur naturalists and fanatical bird-record keepers has meant that details of population change are better kept there than perhaps anywhere else on Earth. Thus we can document when the last red-backed shrikes or wrynecks bred, or when the wood warblers disappeared; we know when the invading collared dove arrived, and we have a blow-by-blow account of the march of the avocets along the east coast. Some increase was perhaps predictable after their early breeding successes, but I doubt that anyone realized just how aggressive they would prove to be, and how capable of driving other species out of their territories! Their bid for Norfolk and Suffolk coastal domination has taken a mere two decades, but since my departure in 1996 another prominent species has made the east coast of England its home.

Familiar to naturalists here in Japan, the little egret (kosagi) is an elegant, poised, piscine predator, taking small fish and frogs from standing and flowing water alike. It is a species that breeds across a huge swath of warmer temperate regions from Japan in the east to the shores of the Mediterranean Sea in the west. Its presence, along with such other exotica as spoonbills, in the Netherlands and France, made those countries attractive summer holiday destinations for British birders.

Its appearance in Britain prior to 1995 was sufficiently rare and irregular to send birders into a frenzy. Not so anymore. Driving the leafy back lanes into the village of Cley-next-the-Sea, I spotted a broad-winged white shape drifting down the Glaven River valley and screamed “Little egret!” with all the fervor of the youthful excitement I had felt when first camping on this coast in my late teens and finding my first migrant rarities. My wildlife photographer friend Roger Tidman could not have been more blase; he too had been there in the 1970s, but had remained ever since, and to him the little egrets were now “old hat.”

I learned that they have colonized the area in just the last five years, joining a collection of cormorants at a colony and rearing more than 30 young a year. I was to see several more in the days I spent retracing my boyhood steps; even five together on one occasion, an unheard of event just 10 years ago and unimaginable 30 years ago when I saw my first avocet.

The ebb and flow of species is like the tide. Some species sweep in, establish themselves and colonize, while others slowly and quietly disappear almost without being noticed. Whereas the reasons for the cycle of the tides are clear, the ebb and flow of species’ ranges are less so, and, unfortunately, far more are experiencing ebb than flow because of habitat loss. The Norfolk coast is affected by the rising sea levels caused by the changing global climate, as well as the fact that the British Isles as a whole are tipping very gently, and almost imperceptibly from west to east. Where on the west coast sea-level rise is barely perceptible, on the east it is compounded by falling land levels. The cost of maintaining the coastal defenses protecting farmland, housing and nature reserves, are a common topic of political debate.

The arrival of the seasonal September storms here in Japan, as in Europe and America, is merely a gentle reminder that change is our only constant; there’s no point in railing against it; instead, adaptability and flexibility are required.