Sweet dreams in the forest 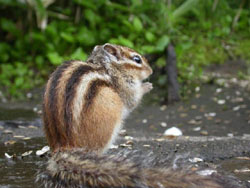 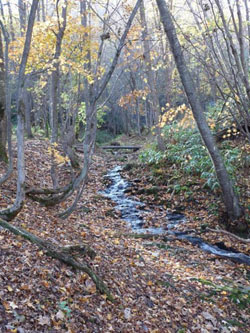 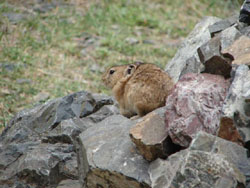 It's closing time in the woodlands of Sapporo as animals prepare for winter.

A gray wall of cloud is sweeping away my view, and the color is being leached from the mountains beyond Sapporo as the drabness of an early winter evening descends. A week of falling mercury, winds from the north and rainfall have whisked away most of this autumn’s browning leaves. We seem to have been short-changed this year and the palette of autumnal colors, usually so vibrant, has been as lackluster as the economy. There is hardship ahead, and in more ways than one.

A sudden cold snap brings a dusting of white — first frost, later snow — to the mountain tops like a casually draped lace coverlet. More rains will fall in the lowlands in the days and weeks ahead — that’s the kind of early winter we have nowadays — but with each fall the mountains whiten, and the cold and lack of insects forces any lingering summer birds to flee south.

Just two weeks ago, I watched late flying dragonflies rustling their wings; and just a week ago, the rustling soundsI heard among the dwarf bamboo were sure signs of chipmunk activity. Sun warmth may tempt them out again, but not for much longer. The forests are quietening, the last of the butterflies has gone, and no birds sing. There is a melancholy to this stage of the year; the colors of autumn are fading yet the full fresh white covering of winter has not arrived. I have been staving off the lethargy of this anticlimactic period between autumn and winter with a flurry of intense activity, putting the finishing touches to a five-year-long project that will see the “birth” of a new book early in the New Year.

It’s an odd season to be engaged in creativity, and deliverance, when all the signs in the forest are those of closing down, abandoning activity, retreating and hiding. After a cold hike, I am wont to retreat to a warming hot spring, there to thaw out and re-energize; frequently, while indulging in piping hot water, my thoughts turn to the living things I have watched during the day that have no such retreat. Just the other day, while descending Toishi-yama, above Sapporo, I came across strange furry excrescences on the bark of several trees. Mostly they were within a meter or so of the ground, and as I stopped to examine them I realized what they must be — clusters of insect eggs, each laid with a furry covering to protect them from the desiccating effects of winds or from avian predators, before winter’s blanket of snow piles up and covers them until spring. Then they will hatch and most likely migrate en masse toward the canopy, there to feast on fresh leaves as they emerge.

Not all of our insects have a diapause over winter in the time capsules that such tiny eggs provide. Several butterfly species seek out dry crevices, hollows in tree trunks that will shelter them as adults through the winter, allowing them to steal a march on spring emerging early to lay their eggs on fresh new growth.

The waning year does, however, bring an end to most of our short-lived creatures and plants, forcing them into retreat; their “hope” for future survival lies in the tiny packets of genetic material and energy they have secreted away as seeds or eggs. Longer-lived organisms adopt different strategies. Falling temperatures and shortening days lead them to conserve their energy, reducing their activity, in readiness for dormancy — waiting out the winter. Preparation for this period of prolonged inactivity may start weeks, even months ahead.

In Mongolia at the end of August, I watched in amazement at the scurrying activity of pika (rock rabbits) gnawing down grasses. They stuffed their mouths with the trimmings and piled their fresh cut “hay” to air- and sun-dry on a rock ledge. On another occasion, I watched as they dragged tiny bundles of already dried hay down into their burrows. Useful as bedding and food, the bonanza of the grass was much in demand by pika even as early as late August, but then snow was already dusting mountains just to the north in Russia.

Another favorite autumn walk of mine takes me up a valley toward Endo-yama, where plentiful oaks rain a snapping, cracking, crunching debris of drying acorns all down the hillside and across the trail. Colorful Eurasian Jays pick them up, weigh them, casually toss away those that are too light, and swallow several that take their fancy. They fly off to cache them, poking them deep into mossy hollows or tree holes. Some they will forget and will have effectively planted, thereby serving the host tree, while others will serve as food when the main bounty has either been depleted or hidden beneath snow.

The jays will be active throughout the winter, but the Siberian chipmunk takes a very different approach. So intent are they on supplying their larders that several times I find them busy almost at my feet, oblivious to my approach. Before the first snows fall, the forest floor is carpeted with fallen seeds of all shapes and sizes, and the chipmunks are eager in pursuit of them, snuffling, rushing, crouching then stuffing seed after seed into their mouths. Their capacity is extraordinary. They can transform, like a slack-cheeked trumpet-player, until their cheeks bulge from exertion. Unable to force more in, the chipmunk dashes off to a burrow nearby to add to its store underground, emerging minutes later sleek once more. Blessed with sufficient body fat, and sufficient food stores, they will disappear underground from November until April, perhaps even May, in an enviable state of hibernation. It is as if they lead a double life, half as a sleeper and dreamer, half as a sprite of the forest floor. During the months ahead they will live at a slower pace, with a lower metabolic rate, slower breathing and a lower heart rate, all to save energy. They will arouse periodically and tuck in to some of those cached seeds, but then retreat once more into a deep, slow-burning sleep during which they rely on their body-fat stores.

Before the mysteries of bird migration were understood, naturalists the world over puzzled over the seasonal disappearance of familiar species. Even into the 18th century, well respected authors such as Gilbert White, parish priest of Selborne and one of Britain’s earliest natural-history writers, described how birds such as swallows and martins passed the winter hibernating in the mud at the bottom of ponds! A fanciful and inaccurate notion, nevertheless migration itself is a means of avoiding winter too. Insights into dormancy may one day allow us to travel longer distances into space, but meanwhile on Earth, there are myriad ways of overcoming periods of low temperature or low energy availability. Some, such as brown bears, use tremendous fat stores to see them through almost half a year of no activity, but their body temperature only drops marginally, and they are really indulging in a long sleep, not in true hibernation. While sleepers rouse easily, hibernators are almost impossible to wake. And neither should be confused with creatures relying on temporary torpor, such as hummingbirds or bats that allow their body temperatures and metabolic rates to fall while resting so as to save energy.