Surprise sightings waiting to be made 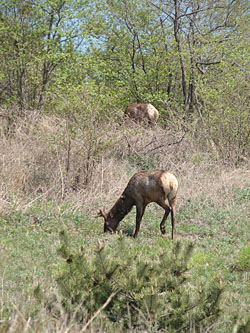 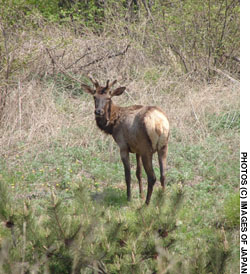 As a child I dreamed of watching wild creatures, and especially mammals, but with no relatives or friends to learn from, I was left to my own devices to find ways to do so.

Youthful interests tend toward the energetic, so it was by bicycle that I explored the length and breadth of my home county of Worcestershire in central England. However, the scarcity of wild, diurnal mammals near my home led me inescapably to become a naturalist with a particularly strong leaning toward birds, and my abundant energy led me to be constantly on the move — eager to know what was around the next corner, over the next hill, in the next patch of habitat.

I was very fortunate that I didn’t have to wait for age to come along as a guide to another technique — with age comes patience, stamina and wisdom. Thanks to a chance encounter, I was able to short-circuit several decades of experience.

During my teens I had taken to regularly watching the fields, woods, hedgerows and waterways around my local reservoir — Bittell — and there I bumped into a naturalist of a very different generation, and with a different focus. Retired early from industry, Dick Orton was a keen angler, editor of Where to Fish magazine and later the Good Fishing Guide, but with a lifelong passion for birds of prey. Our first brief encounters were based around my simple inquiry, “Is there anything interesting about?” This soon led to longer bird chats and ultimately to the first of many invitations to join him and his wife on wildlife-watching excursions very different from my own.

With military precision (he had that background and retained the dapper mustache), Dick would pore over maps, plan an approach, choose an OP (observation position), and on the appointed day we would set off early — often in darkness — to drive across to the Welsh borders.

A long trudge across open country to a hilltop or flank deemed just right, commanding a view across vales, hills and as often as not a stream or river valley, ended in us settling in for the best part of the day. Out came folding chairs, blankets, waterproofs, flasks of strong tea, sandwiches and homemade cake. We settled down; we sat, we were quiet. It was an entirely new experience for me and went against the teenage grain of rushing about in pursuit of new sightings. But it was exciting.

A whispered “sparrow hawk, female, over the far ridge,” or “merlin jinking up the valley, passing the hawthorn tree in blossom” or some such comment might break our prolonged meditative silence, and all our binoculars were instantly trained in the same direction until the bird was lost to sight, and we sank back into our alert state of reverie.

This was sit-and-wait natural history, and thanks to Dick I learned of its benefits many years before I might have otherwise. It repaid us on many field trips with superb sightings of then hard to see or find raptors such as peregrine falcons, hobbies and red kites. That was in the 1970s after all, and various species were only slowly recovering from the ravages of postwar pesticide overuse. The sit-and-wait technique allowed us to blend into the landscape and be forgotten by the local wildlife, whereas constant movement would have kept all at bay.

Fishermen and hunters are no strangers to this technique, but the thrill of using it for observing or photographing wildlife — and the sense of privilege at witnessing the close proximity of a wild creature — are indescribable.

I recall vividly spending one mild evening many years later in woodland near Berkhamstead in the county of Hertfordshire, England, not too far north of London, in the company of naturalist Masaru Takada from Nemuro, Hokkaido. We decided to trade a woodland ramble in search of tawny owls for an evening vigil sitting motionless like tree stumps — I was eager to show my friend a badger, and I knew where there was an active pair. We sat, motionless, for what seemed like an eternity, and nothing could have been more exciting than witnessing the black-and-white faces of the badgers peering out of the gloom, sniffing and snuffling, exploring the forest floor around us until they were virtually at our feet.

I have employed the technique with equal success in places as far afield as northern Okinawa for point-blank views of Okinawa rails and the Falkland Islands for king penguins. In the latter case I lay down, pretending to sleep, near a colony until eventually curiosity led them to investigate and the birds surrounded me. Sitting quietly and at great length beside an obvious trail on another of the Falkland Islands, I have had rockhopper penguins treat my feet like rocks to be pecked at, hopped on and jumped over!

This spring, while on the small island of Socheong-do off the Korean coast, I introduced my friend Angus to my memories of stationary wildlife-watching, and together we decided to trade our usual daylong wanders in search of migratory birds for a daylong “big sit for Dick,” named in honor of my early mentor.

We’d scouted out a hilltop — almost at the center of the island — the day before, and a fine view of a migrating upland buzzard convinced us of the efficacy of our plan. On May 3, we were in position by 7:30 a.m. with pads to sit on, flasks of soup and coffee, and food to see us through. The first hour was the busiest as we added to the buzzard common species from around the island that were visible through binoculars and telescope.

Raptors were much in evidence, and a pair of peregrine falcons featured, repeatedly entertaining us with their flying skills during the day. At 7:55 a.m. the day’s first celebrity appeared — a fine overshoot migrant ashy drongo — well beyond its normal range. At 8:22 a.m. a shimmering, insect-like trill announced the arrival of a male pale-legged warbler, and various other warblers passed over our hill in the hours that followed: yellow-browed, Pallas’s, and eastern crowned; we saw a fine male black-naped oriole resplendent in gold and black; then at 8:50 a.m. a smart silky starling appeared — another unexpected migrant.

We broke for snacks and drinks, our conversation meandered and ranged widely, we strolled occasionally in the open, still mostly leafless, woods just below our OP.

Then at 2:10 p.m., as we sat staring along the spine of the island, willing more migrant birds to appear, the biggest surprise of the day appeared among the trees on the flank of the hill below us — a deer! Another head appeared, then another — a stag and two hinds. Socheong-do is a small, and remote island, closer to North Korea than anywhere else, so where had the deer come from? What kind were they and why were they there?

My first thought was sika deer, but these were bigger than any I’d seen before. Red deer? They were suitably large and dark, but Angus spotted the flaw — their proportions. He concluded these must be wapiti — the North American subspecies! Whether there were more among the trees we never found out; these three faded back into the forest. Had someone tried to start a deer farm? Attempts to find out more drew a blank, and we were left only with speculation.

The deer were a pertinent reminder that when you employ the sit-and-wait technique, good company and good food make for a pleasant day — but wildlife provide the excitement, and you never know what will turn up.

If you think a “big sit” sounds fun, you can find out more about natural history’s most sedentary event (and about the competitive side of the “sports”) by visiting www.birdwatchersdigest.com/site/funbirds/bigsit/bwd–bigsits.aspx#world