Not so tame: Rocketing through ski tracks in the Hokkaido snow, this tiny shrew provides a distraction from the day's pursuits. Fitting in one gloved hand and probably weighing less than an eyeball, the insectivorous mammal nonetheless has a feisty side. |

Ski sortie takes a shrewd turn for the cuter 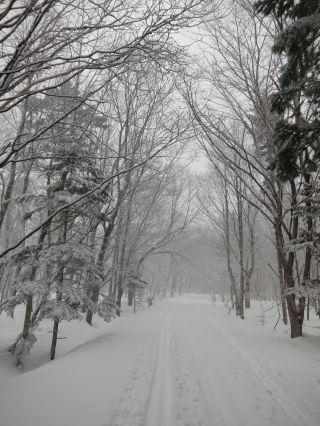 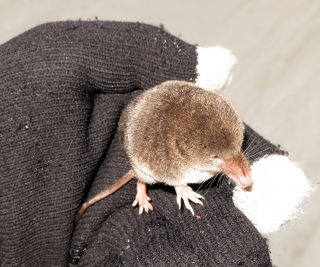 It was cold and snowing and my mind was far away: I was already imagining returning to the warmth and color of the indoors after this, my latest winter sortie outdoors. It was only the rhythm of my skiing that was keeping me on track and bound for home.

Then I was jolted back from my reverie into the colder monochrome reality by movement registering in my peripheral vision. A small black shape had rushed headlong toward me across the snow, like a low-flying mini comet. Suddenly, and uncometlike, it had turned 180 degrees and was now hurtling off in the opposite direction — which was the way I was heading. At first it seemed just a blur in the ski tracks.

I regularly ski a 10-km course in 2.5-km sections, with each taking me about 20 to 25 minutes depending on snow conditions and my mood — though those timings can be thrown off completely by an unexpected sighting, such as of a Black Woodpecker, a White-tailed Sea Eagle, a Red Fox, a Mountain Hare — or a “mini-comet.”

On a typical day, I suppose I travel at an average speed of around 6 kph — yet whatever wee beastie was running ahead was getting away from me at my usual speed! I put on a spurt, closed the gap and stopped as it turned once more and headed back in my direction. Now I could see it better. It wasn’t so much flying along as bouncing and rattling along in my ski tracks like a little black head-first skeleton sled in a bobsleigh run — though this one wasn’t powered by gravity.

As it zoomed toward me it became clear what it was: Its small body, long tail, long snout and tiny, almost invisible eyes, all told me it was a shrew. Next second it had disappeared under the tip of my cross-country ski.

The shrews, known in Japanese as togarinezumi, are superficially mouselike insectivorous mammals in the Family Soricidae, though for some reason the term shrew has also been applied to a bad-tempered or aggressively assertive woman, as in Shakespeare’s comedy, “Taming of the Shrew.” With a similar disregard for any finer feelings these diminutive creatures may have unknown to us, there’s a traditional Egyptian belief that brands them “spirits of darkness.”

However, the individual trapped in the snow beneath my ski could perhaps have been misconstrued as bad-tempered — it let out several barely audible squeaks as I could see it poke out its narrow nose. I am amazed at how birds as small as Goldcrests can weather our frigid winters, and in the Americas I have marveled at how hummingbirds can survive at considerable Andean altitudes, but this tiny creature in the snow at my feet seemed a veritable miracle of survivorship — though I wondered for how long.

Considered to be among the world’s most primitive surviving placental mammals, the shrews live right at the limits for vertebrates. Among their number is the world’s smallest mammal, and they exhibit some record-breaking anatomy and physiology.

These tiny creatures live life in the fast lane: They breathe at a blur compared with us, taking up to 800 breaths per minute (whereas we begin life after birth taking 30 to 60 breaths per minute, though this declines to between 12 and 20 breaths per minute in human adults). They are right at the physical limits in terms of their heart rate: no leisurely 60 to 80 lub-dub beats a minute for these creatures; at rest, a shrew’s heart purrs along, beating an astonishing 1,000 times a minute. Perhaps not surprisingly considering such extreme cardiac demands, they usually do not live for more than one or two years.

I reached down and managed to capture this one and admired its dense coat of uniformly dark fur, and peered at its tiny eyes. I guessed that one of my own eyes weighed more than it did!

Because of their small size, shrews have a high surface-to-volume ratio and lose body heat rapidly through convection. This one seemed on the verge of torpor when I first picked it up, or was it just terrified by my bulk and proximity? However, after a minute or so of placidity in my hand, my bodily warmth seemed to revive it — and then the renowned pugnacious nature of shrews became immediately evident in the way it bit into the glove I was wearing and was reluctant to let go. Its teeth were tiny, sharp dark-tipped pegs, and I guessed that had I not been wearing gloves they might have drawn blood.

The shape of an animal’s teeth is a fair indicator of diet, and in the case of the shrews they indicate they are predators. Shrews, like moles, are in the taxonomic order Insectivora and, as that name implies, their diet consists largely of invertebrates — a wide range of insects such as beetles, grasshoppers, butterflies and moths, but also spiders, snails, slugs and earthworms. They are not averse, either, to eating small birds, rodents, reptiles and even other shrews, and some species also consume seeds, roots and nuts.

The dark pigmentation on the tips of the teeth is apparently a deposit of iron in the enamel, which may make them stronger and resistant to wear, presumably an advantage in a tiny creature that needs to eat every few hours and consume as much as three times its own body weight in food each day.

Most shrews I encounter are lying dead on forest or mountain trails, often showing signs of having been bitten, but rarely with parts of them eaten. Though once, while watching a shrew on the surface of snow, I was amazed to see a Sable pop up from beneath the glistening white duvet like a lithe mustelid jack-in-the-box and, in one bite, consume the tiny animal. Owls are their main predators, and while a range of mammals (including cats) also kill shrews, few actually seem to like eating them.

Unusual among mammals, some species of shrew are venomous and have grooves in their teeth to convey the venom into their prey. They may also be distasteful to predators as they have a gland in their hindquarters that releases a pungent odor.

The nearly 400 species of shrew exist in almost all terrestrial habitats, from montane and taiga regions to arid areas and almost worldwide (with the exceptions of New Guinea, Australia and New Zealand). The world’s largest shrew is the 15-cm-long, 45- to 80-gram Asian House Shrew of tropical Asia, which occurs in southern Japan in the Yaeyama Okinawa Islands. Meanwhile, the smallest is the Pygmy Shrew, one subspecies of which measures only 4 to 5 cm in length and weighs less than 2 grams — and which has even been found in northernmost Hokkaido!

As I held the shrew in my gloved hand, I could feel its heart beating like a constant, thrilling vibration. Once its teeth were free from my glove it wriggled constantly and, fearful of crushing it, I bent to put it down in soft snow where I thought it might easily burrow its way down to ground level, relative warmth and food.

Before I could release it, though, it jumped free, bounced into my ski tracks once more and shot off down what — to it on its diminutive scale — must have seemed like a canyon with parallel ice walls. It appeared to rattle and bounce in the tracks like an out of control luge on a suicide run, and as it disappeared from view around a curve in my tracks I could only admire its speed and stamina on a cold, wintery late-February afternoon here in Hokkaido.