Singing the praises of sparrows 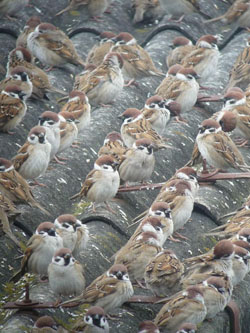 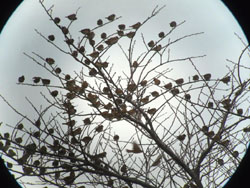 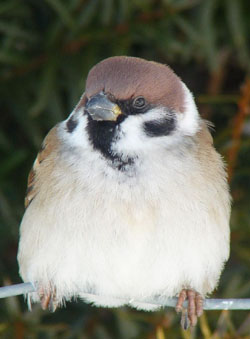 In a rush of small wings, a fluttering, chirruping, congregation of familiar birds — Eurasian tree sparrows — descended on the bush in front of me. They chattered noisily among themselves, each shifting its position almost constantly as if unsure whether it had the right to be on any given perch.

A moment later they were off, dashing out pell-mell in a dense flock in search of scattered grain; a blur of browns, swinging left and right, swirling nervously, settling briefly, guzzling quickly.

Mere seconds later they had dashed away again and out of sight, only to reappear after a few minutes, descending once more into the bush like aliens beaming down from space.

The frenetic behavior of these boisterous little birds was mesmerizing and something of a distraction. I was in the midst of an annual pilgrimage to a feeding site frequented by red-crowned cranes in Akan village, just north of Kushiro in southeastern Hokkaido.

However, instead of watching the elegant pacing and pirouetting of courting cranes, and instead of admiring the astonishing agility of white-tailed eagles as they swooped in and about through the cranes in quest of fish, I found myself admiring the plucky cheek of the sparrows as they dashed hither and thither under the unadmiring gaze of ranks of photographers. The shutterbugs ignored them. After all, who would pay them any heed when there were cranes on offer? Well, me for one.

One of that dashing horde, though familiar in form, was oddly colored. Its flockmates were the typical combination of shades of brown and gray, sporting a rich-chestnut crown and nape and a black patch, like an overgrown beauty spot, on each gray-white cheek.

Unlike them, the oddity was a dark sooty-gray all over, a blackened ghost. It seemed not to be the result of some genetic anomaly darkening its plumage with excess melanin. Instead, its darkness seemed a superficial coat, perhaps of something dark on its feathers such as coal dust. Its true plumage showed through as if glimpsed beyond a blackened veil. I have heard tell of entotsu suzume (chimney sparrows), so named because they become daubed with soot while roosting in old-fashioned chimneys at night. Perhaps my dim specter was one of these. Regrettably, though, it was gone before I could take a photograph — but its haunting appearance has lingered in my mind, and I have been thinking much about sparrows of late.

A mere 30 years or so ago, the Eurasian tree sparrow was a common bird in Japan, but since then its decline has been dramatic. It has also declined elsewhere in its range over the same period of time; in Western Europe and in the British Isles, 95 percent of its numbers have disappeared. This plunge is thought to be a result of the intensification of agriculture in those areas combined with increased use of pesticides and herbicides.

In Japan, these and other factors may similarly have conspired to reduce the sparrow population. In the past, considerable hunting of sparrows as pests took place here, but in recent decades the area of land cultivated for rice has shrunk, and the sparrows that relied on the waste grain available after the harvest, and on weed seeds for their food during winter, have declined too.

In spring and summer, sparrows typically switch to feeding on insects, and then commonly feed their young on invertebrates. Hence their decline may also echo the loss of insect diversity caused by intensive spraying.

Additionally, older buildings that offer sparrows many natural cavities in which to nest — beneath eaves, in gaps around windows and so on — are steadily being replaced with new, sealed structures allowing no access for nesting birds. This, too, is likely to have severely reduced their numbers.

Holes in trees are also favored nesting sites for sparrows, but such cavities are always in limited supply, and many other species compete for those scarce sites.

But for whatever reason, or complex of reasons, that the numbers of a once- abundant species can slide so dramatically downhill is alarming and makes encounters with them today all the more memorable.

A few weeks ago, while on a visit to southwestern Kyushu to watch yet more cranes, a cold snap brought a surprisingly heavy snowfall, and strong winds driving in from the northwest made conditions difficult for many species. While larger birds were just about coping despite their buffeting by the wind, I found that sparrows were desperately doing whatever they could to just stay alive in face of the wind’s chilling effects.

Large numbers of sparrows typically gather in southern parts of Japan during winter, when flocks of two species — the Eurasian tree sparrow and the russet sparrow — can be found mixing together. This winter at Arasaki, Kagoshima Prefecture, I came across hundreds of both species crowding together, doing their best to avoid the wind.

Chattering mobs of them were huddling in the lee of buildings, lines of them were sitting along windowsills, and on one particular building, each and every one of the many protruding bolts holding the corrugated walling together on its windless side was being used as a perch!

It is rare to find a tree sparrow silent or still, except under such windy conditions as those. As individuals, they give the appearance of having imbibed too much caffeine; even their flocks seem restless and unable to settle. Their ceaseless movement and fluttering not only serves to help distinguish them from other species but has also inspired artists and even choreographers here in Japan.

Sendai City in Miyagi Prefecture, for example, boasts a traditional Suzume Odori (Sparrow Dance), said to date back some four centuries to one performed by stonemasons celebrating the construction of the city’s castle. So, as humble as they may seem, these lively little birds have been a mighty inspiration to many over the years. Would that they will continue to be so for many, many generations to come. N ow, sparrows apart, have you found your “tiger”? (See my last Wild Watch column in January if that question makes no sense to you.)

Whether rare or common, each species deserves our attention; each one holds some fascination in its lifestyle or adaptations to its habitat; and each has a well-earned place in its environment.

Each member of every other species is, like us, the product of an unbroken line of survivors. It is so easy to overlook the commonplace, ignoring such things in our quests for something more rare and exciting, as if rarity value somehow guarantees excitement. Yet, even sparrows — symbols here of meekness, lightness and friendliness — provide us with plenty of their own excitement, too.