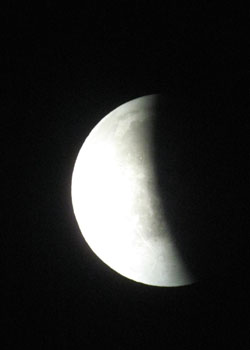 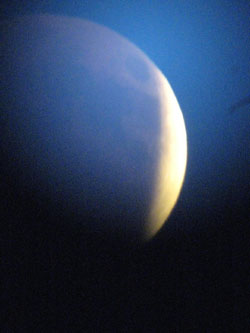 On a calm evening, I looked out from my balcony toward the mountains to the west, beyond Sapporo. Those distant peaks stretched in an apparently unbroken chain, from the gently sloping flanks of volcanic Mount Tarumae at the southernmost end, rising and falling northward in a bold, time-weathered horizon through Mount Soranuma, Mount Sapporo, Mount Teine and, on this stunningly clear evening, even as far as Mount Akaiwa beyond Otaru.

The sun, a shimmering deep-orange orb, seemed to swell and bulge as it sank beyond my line of sight. As all light seeped from the landscape, the mountainous ridge-line that dominates my view turned to silhouette, and the night sounds of stridulating insects in the meadow below seemed to rise in volume as my eyes and ears readjusted from evening to night.

Minutes later, after the westering sun had set, I looked eastward for the rising moon. There should have been a full, glistening disc rising, but that face was partly shadowed. It seemed that a creeping blight was spreading; dulling then killing its reflected light. For two hours I was entranced.

I can still hardly believe my luck. By pure chance I was in the perfect position, at the right time, on the night of a full moon, to observe one of the greatest of natural phenomena. The creeping shadow was that of the Earth, cast off into space by the sun below the horizon, and as the moon rose from my perspective it was passing straight through that shadowy zone. Like a great eyelid slowly closing across its brilliance, the shadow dimmed the moon until only a narrow crescent remained; then even that was gone. For some while the lightless face of the moon was difficult to track up in the sky. Then slowly, in the lower-left quadrant, light began to return until the veil finally drifted clear — leaving the full moon clear and brilliant as ever.

Amid Japan’s heavily urbanized landscapes, levels of ambient light are so great that stargazing is now well-nigh impossible. Although the time-traveling pinprick lights of stars are lost against the urban light-haze, thankfully the moon still rises brightly, though mostly an ignored backdrop beyond so much neon. I wondered how many others had even witnessed this astounding celestial event.

Just one week earlier, when the moon was still far from full, I had lain in my sleeping bag in the Gobi Desert, staring at a Mongolian sky so heavily peppered with stars that I was astounded at how light the night was. The Milky Way arched overhead in a great timeless river of distant light, against which ephemera moved. Brighter lights passing in steady straight-line courses above were satellites. Thanks to them, and (marvel of modern technology) my pocket GPS device, I knew exactly where I was — Nemegt (N 43 30 E 101 04 and 3,250 km to the west of my home in Hokkaido). I was camping with an international group of nature tourists on a rise above a narrow canyon, an outwash from the Nemegt Mountains.

The expected darkness of the night was partly dispelled by the rain of ancient illumination from stars and the moon, bringing silvery silhouettes to the hillsides and even slight shadows. The brightness of the night sky seemed so appropriate, such vast luminosity shining a light on and from Earth’s ancient past.

Nemegt is an extraordinary place that attracts dedicated scientists and unscrupulous poachers alike. The former come armed with hand tools and brushes seeking signs of past life to unravel further the intricate web of evolutionary links between ancient and modern ecosystems. The latter, the poachers, come armed with pickaxes and jackhammers, intent only on smashing free dramatic skulls or recognizable bones to be smuggled out over the nearby border and sold illegally to the highest bidder.

Wandering in these badlands, you’re as likely to bump into some of the best and worst of humanity — and to literally stumble over relics of eons long before humans evolved.

This year in Nemegt, I was doubly fortunate, both in a meeting and in a sighting. Exploring the area in search of ancient bones, my group and I quickly came upon a multidisciplinary, multinational team of paleontologists, geologists and sedimentologists. Despite their busy schedule of prospecting and excavation, they took time out to show us a staggering find. Emerging from a rapidly eroding low cliff was a small piece of gray fossil bone. Their excavation of the area revealed that this was part of a pelvic girdle, and that articulated to it were limb bones. That alone would have been exciting, but what made the find even more staggering was that beneath this as-yet unnamed small dinosaur’s skeletal remains lay a scattering of crushed egg shells.

What the team had discovered was a creature brooding its clutch of eggs. How I wished I could have remained to watch as the dig proceeded, to see more of that creature’s remains emerge from the cliff. For the animal to have died there on its nest, for its body to have remained in place and articulated, we can only surmise that it must have expired suddenly, catastrophically, perhaps in a sandstorm or a dune-collapse. Then, in the succeeding ages, it became increasingly buried by layer after layer of sand, by occasional soils, and was compressed and crushed but preserved and fossilized until its discovery just last month.

I have seen dinosaur fossils in various parts of the world, and their reconstructions in innumerable museums. As a biologist, however, it is behavior that excites me, and even hints of that are generally lacking from fossilized remains. What made this find so astounding for me was its encapsulated story — the behavior of the creature, its posture crouching over a clutch of eggs, presumably its own, and the catastrophic end that befell it and its brood.

As an ornithologist, here was behavior I could visualize, for I have seen so many birds brooding their clutches. But in what environment had that creature nested? What kind of lifestyle had it lived? Perhaps the complete excavation will reveal more.

Although deeply impressed by happening upon such an exciting find as it was being revealed, it was only later that day that I realized just how fortunate my group and I had been. As we luxuriated over predinner drinks, a vehicle crossed the dried-out landscape before us — visitors! And not just any visitors, but those paleontologists whose excavations we had stumbled upon earlier: Dr. Badamgarav of the Mongolian Academy of Sciences, with Dr. Philip Currie of the University of Alberta in Canada.

My mind racing, memories jostling for space, I finally tagged name and place and remembered papers and books by Dr. Currie that I had seen when visiting Dinosaur Provincial Park and The Royal Tyrrell Museum of Paleontology in Alberta. To have such eminent scientists just drop by at our camp was more than a surprise, but to then be treated to an explanation of the site and of the ongoing work was indeed a huge joy.

From the man who probably knows more than anyone else alive about the relationships between dinosaurs and modern birds, we learned that the brooding creature found two days previously was one of perhaps just five such specimens known worldwide. To have heard about the story later would have been amazing, but to witness it as it unfolded was truly remarkable. In fact, that occasion of being in just the right place at the right time to meet the right people was my greatest red-letter day in a life of natural-history observations.