Rites of spring: Cherry-blossom parties like these in Kanto are held in late March or early April, at which time the petals have

Seasons come and go - but when? 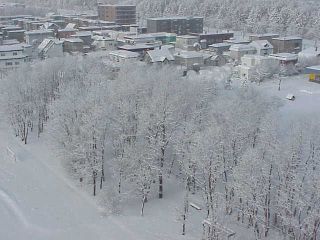 Another new year has arrived and a Hokkaido blizzard is tearing past my window, drifting snow onto every surface as if it means to drown out the world in whiteness. Thankfully it also brings a muffling silence into which thoughts pop and crackle.

As ever at this time, the promise of the new beckons, with so many plans, resolutions and possibilities. However, reality, and the events that arise from day to day, frequently intervene and turn each new year into something rather different from expectations.

It’s a valuable reality check — rather like knowing the overall annual climatic pattern for your home area, but being hammered by the reality of the daily weather you receive. Climate is, after all, all about predictability and expectations, whereas the “other” is WISWYG (weather is what you get). Weather is all about the only day we actually have — today; climate is how it all averages out into prevailing conditions over many years.

The year ahead promises much, but what will it actually deliver? I am guessing that it will again feature some extraordinary weather phenomena wrapped in a pattern of the reasonably predictable.

In his marvelous 1890 volume “Things Japanese,” Basil Hall Chamberlain, the renowned English Japanologist and professor at Tokyo Imperial University, makes many pertinent comments concerning Japan’s climate. One phrase that particularly resonates with me (because I, too, am English) is that Japan “has more fine days, and that the fine days it has are incomparably finer and more inspiriting than the feeble, misty incertitudes that pass for fine weather among the natives of Great Britain.”

What a delicate, but insightful, turn of phrase. Once this blizzard has passed, I hope those fine days will return . . .

Of particular note also is Chamberlain’s comment that, “One striking peculiarity of the Japanese climate is the constant prevalence of northerly winds in winter and of southerly winds in summer. Another peculiarity is the lateness of all the seasons, as compared with Europe … winter is robbed of the gloom of short afternoons by the transparent clearness of the sky down to the end of the year, and even throughout January whenever it is not actually raining or snowing.”

Chamberlain’s grasp of the prevailing winds affecting the country, and of its seasons, is perceptive and no less true today.

The procession of Japan’s six seasons — winter, spring, rainy season, summer, typhoon season, autumn — seems at first to be highly predictable, yet the classic calendar is strangely at odds with the reality and seems heavily biased toward the ancient capital of Kyoto.

Winter (fuyu) traditionally lasts from Nov. 8-Feb. 4, spread equally each side of the midwinter solstice, though by the latter date some parts of northern Japan are just entering their coldest period of the year, while in Okinawa cherry blossom, that most potent symbol of spring, can be seen from January onward — in other words, in midwinter.

Spring (haru) traditionally runs from Feb. 5-May 6, spanning the spring equinox, yet for at least the first two months of that period northern Japan remains in the very depths of winter while Okinawa is already experiencing summerlike heat and humidity.

So too with summer (natsu), traditionally held to extend from May 7 to Aug. 8, and autumn (aki), from Aug. 9-Nov. 7 — seasonal timings that relate neatly to the midsummer solstice and the autumn equinox, respectively. Despite that, they are hardly representative of the true seasons as experienced here.

Predicting weather is one thing; accuracy is another. That said, having grown up with BBC weather forecasts I am always impressed by how good the ones are in Japan, because even when wrong they usually seem to be out by a matter of time, not by the event.

Japan’s weather prediction capacity dates back to well over 100 years ago. Then, there was a strong relationship between Japan and Britain and it was to that country that Japan turned for help. In 1871, just three years after the Meiji Restoration, the government invited a renowned Scots surveyor named C. A. McVean, and H. B. Joyner, a trigonometer, to Japan to assist with work in that field.

Two years later, presumably on the advice of these foreign experts, the government decided to establish the Central Meteorological Observatory in Tokyo, and ordered apparatus and instruments from the Meteorological Office in London.

By 1875, everything was installed at a location in the central Toranomon district of the capital, near to where the Hotel Okura stands today. In June of that year, weather and seismic observations began to be taken and recorded three times a day. Thereafter, a number of local meteorological observatories were launched and in 1881 German mathematics professor at the University of Tokyo, Erwin Rudolph Theobald Knipping, compiled Japan’s first meteorological chart.

From March 1, 1883 onward, the Tokyo District Meteorological Observatory began producing meteorological charts regularly and made daily deliveries of them to government ministries, newspaper companies and various overseas governments. The compilation of this crucial data allowed the first-ever typhoon warnings to be issued on Aug. 17 and 18, 1883. Then, on June 1, 1884, Japan’s first national weather forecast was announced, and thereafter bulletins were released three times a day.

Japan’s latitude, its complex topography, its marked contrasts in elevation, the presence of major cold and warm offshore currents, and its proximity to the Asian continent all contribute to striking local climatic differences in its broken chain of islands. The effects of the continental, montane and marine elements dominate to a degree that they don’t in Britain, giving Japan a distinctly seasonal climate — or climates, since the country straddles several climatic zones — and hence experiences rather predictable weather in each.

The north of Japan, particularly Hokkaido, where I live, lies within the “cool-summer continental climatic zone.” This is characterized by summers that are cool and short, coastal areas frequently fog-bound during May and June where the cold Oyashio current passes, a frost-free period that is only four to five months long, and long, cold and snowy winters.

Northern Honshu lies within the “warm-summer continental climatic zone,” with summers and winters both warmer than in Hokkaido, but with heavier precipitation falling as deep winter snows along the Sea of Japan coast, and as prolonged spring, summer or autumn rains on the Pacific coast.

Central and southwestern parts of Japan are within the “humid subtropical climatic zone,” characterized by high summer temperatures, abundant rain and high humidity. Winters there are relatively mild and even the coldest months average above freezing. For much of this region, summer precipitation predominates, although areas along the Sea of Japan coast receive greater winter snows.

In the far south, in the Nansei Shoto islands stretching between Kyushu and Taiwan, including Okinawa, the feeling is even more sub-tropical; it is here that coral reefs grow, where the forest sports tree ferns and cycads, and where there is hardly any temperature difference between winter and summer.

Elsewhere in Japan, though, the temperature extremes can be considerable; take Kochi Prefecture on the island of Shikoku, Tokyo and Asahikawa, Hokkaido’s second-largest city after Sapporo, for example. Shimanto in Kochi can boast Japan’s hottest official record (41°C on Aug. 12, 2013), though unofficially that was beaten in Adachi, Tokyo, on July 20, 2004, with 42°C. Meanwhile, Japan’s coldest record was set in Asahikawa on Jan. 25, 1902, at -41°C. The weather station on Mount Fuji was only able to record a low of -38°C (on Feb. 27, 1981).

Will we experience more manatsubi and moshobi in 2014? One thing is sure, new records will no doubt be set in some field or other, whether it be greatest rainfall, highest temperature or strongest wind — something will likely be extreme. Put simply: Expect the unexpected when it comes to weather events.