Hotheaded youth: The gray-brown plumage of this iced-over young whooper swan was only visible on its head and upper neck, which it had tucked back for insulation overnight between the true feathers already grown on its wings. 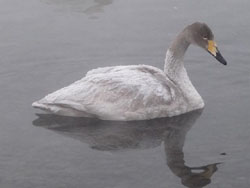 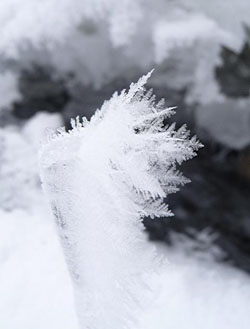 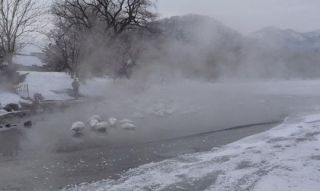 An indefinable quality in the light somehow signals the air temperature. Airflows from the north and northwest have, for many days this late February just gone, kept Hokkaido frigid. An intangible crispness in the atmosphere combines with the luminosity to forewarn of seriously subzero temperatures. Multilayered clothing is a must, but the static electricity it generates is truly shocking.

Outside, snow squeaks and creaks underfoot — another, more tangible indication of the biting cold. The sound verges on the painful with its shrill hint of fingernails on a blackboard. At 8 C below, moisture freezes inside my nostrils; at minus 20 C my heat dissipates with alarming speed despite my layers of clothing — again eliciting my utmost admiration for the capacity of small creatures to survive such conditions.

At the end of January, Lake Kussharo in the Akan National Park in eastern Hokkaido was a leaden, dark blue. The first skin of lake ice, broken up by the wind, was concentrated in a rattling, tinkling mass near the southeastern shore. Jagged fragments of clear ice the size of dinner plates were jumbled together; they sounded brittle and fragile, like wind chimes made of crystal glass.

Beyond, on the open lake, whooper swans all facing into the wind “whooped” softly as they kept in contact with each other. Were they complaining about the conditions?

By mid February, the northwesterly airflow had wrought its alchemy on the surface of the lake, turning liquid water into a diamond-clear layer. Etched and blasted by the wind, the thickening ice was like a multitextured carapace locking air away from water — each day of frigid temperatures adding to its thickness. This face of winter was superficially beautiful, yet seemed aloof and cruel — tempting exploration, but at any moment threatening a fatal immersion.

Nearby onshore, meanwhile, the deep blanket of snow presented a totally different, much gentler face. The lightness and depth of the powder and the rounded contours of everything it covered conveying a softness and suggesting warmth; a comforter beneath which subnivean life could go about its business insulated from the biting-cold wind.

At one place, where the ice should have met the shore, rising warmth from a geothermal spring sent plumes of mist rising into the morning air. That mist, condensing on lakeside reeds and tree branches, had frozen in an intricate hoarfrost coating. Row upon row of tiny “ice-flowers” clung to the twigs; the slightest touch or breath of wind causing them to fall like icy imitations of plum blossoms felled by a spring wind.

Stepping out onto the ice, gingerly like a wary fox, I waited for the lake’s covering to “speak” to me. In an austere language of sudden, fragmentary sounds, the ice described its condition. Creaks and groans and occasional cracks and grunts indicated its extent and thickness as it spanned the lake. Here and there fine ridges indicated where massive ice plates had fractured, reconnected and ground against each other. The occasional “crumph” indicated that large expanses of the frozen shell were settling slightly. Narrow, snaking cracks indicated the plates’ past movements.

I’ve heard and seen those cracks as they happen; they are outlandish enough in daylight, but at night they sound eerily like an experimental electronic workshop mixing zipping sounds with rumbling roars. Even several meters from the shoreline, a soft harmonic in the ice’s murmuring indicated there was a sufficient covering to bear my weight; more ice than in three recent winters, but far less than I have known in the not-so-distant past.

In one area, I found those earlier icy “wind chimes,” now packed and stacked vertically like plates crushed together, all dusted with powder snow. Within some patches of ice there were beautiful, inexplicable shapes — perhaps earlier fragments of ice, wind-etched and rounded before being frozen in a broader matrix.

The variations in the ice were too numerous to describe; here it was clear with rounded fingertips of glass at the edge, like a frozen Hokusai wave reaching outward for the unwary; there, it was a crevassed mass, treacherous and awesome where the wind had pushed layer after layer together toward the shore, freezing them into a rugged icescape.

In places, hidden among the cracks and crevasses where the wind could not reach, were the true jewels of the ice — fragile, multibranching crystals so fine and delicate they reminded me of feathers.

Where, until recently, the whole mountain-ringed lake had been available to the swans, now the only ice-free haven was around the hot spring. The early morning mist-frost had coated them, too, imparting a white-on-white icing to the chiffon of their plumage. A gray-brown youngster’s plumage was most visibly iced everywhere except about its head and upper neck, where these had lain through the night tucked back and insulated between the true feathers already grown on its wings.

The delicate crystals of morning frost, with their filigreed beauty, conjured a strangely enduring mental image of winter. Yet today, further signs of desynchronization in the season abound. Flags snap and flutter noisily, indicating a significant shift in the wind direction. Now it blows from the south; it has come like an emissary from a far-off spring kingdom, hinting that the season is changing — and perhaps dramatically.

The temperature has risen swiftly, pushing through the zero barrier and reaching into double digits, and for the last few days the air has not only lacked its crystal clarity, but it has borne hints of fog. In fact, as I write this (on Feb. 25), the warmest-ever day in Hokkaido has just been officially recorded.

Consequently, sea ice — only recently arrived along the Sea of Okhotsk shore — has been driven back northward. Snowfields and drifts, once fluffy and light, have slumped perceptibly day by day until they now reveal the contours of what lies beneath, or have even melted to expose great areas of ground. However, although blossoms are already breaking far to the south, here in the north this warming is not yet the end of winter, which will likely regroup and attack once more as the wind shifts. Recent late-February warmth, more typical of April, is, nevertheless, a visible weakening of the winter season and a sign that the new one, the busy season of bursting life, growth and frantic activity, is about to spring upon us.