Art in nature: Still life with geese and Mount Rishiri in the Sea of Japan.

Sarobetsu's a stopover to count on for wonders 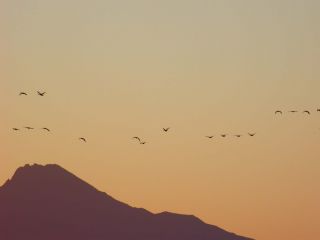 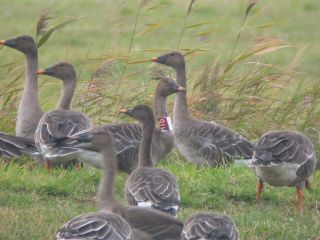 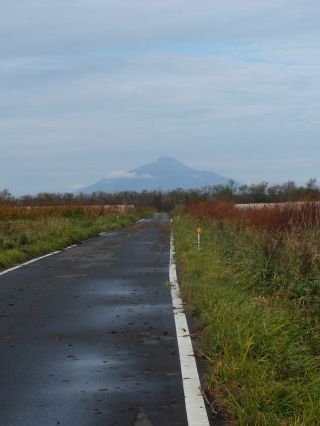 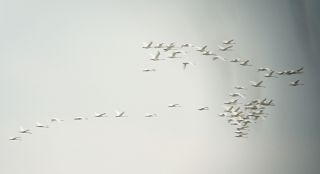 Gray predawn light suffuses the eastern horizon before crawling slowly across the landscape — but not before a rich clamoring reaches my ears.

The swans are waking, and they are in earnest about moving on. The clamoring is their alert to one and all of their brethren that dawn is upon them — and their expression of their urge to travel.

The autumnal scene before me has cool hints of the coming winter, which is what the swans, geese and other waterfowl are all fleeing. The swans have spent the night softly bugling their thoughts of family flocking, and migration, while I have spent the night camping nearby and listening to their gentle sounds.

This dawn for me and those birds has broken at Sarobetsu, part of the Rishiri-Rebun-Sarobetsu National Park in northwest Hokkaido. Broad swaths of swampland vegetation ripple and rustle in the light morning wind. The breeze raises a soft, hissing response from the wavering reed-grass stems; it brushes across the land and across my thoughts, still murky and sleep-filled.

The breeze brushes, too, the surface of a pond where the Bewick’s Swans have rested, and raises the steel-gray surface from ripples into wavelets. At first, the floating swans gently bob their heads atop their long white necks and call. Then, as they raise their voices, they raise their heads as well. Throughout the flock, the swans’ nodding, bowing and calling escalates, all signaling their readiness and desire for flight.

The first birds lunge forward and break into a momentary slapping, thrashing run across the surface of the pond; the great black webs of their feet raise splashes as they unfurl great expanses of whiteness. Behind them other, less-certain individuals soon follow, as if dragged along on an invisible thread of elastic or in the vanguard’s slipstreams. Soon, the whole flock is drawn in to the commotion.

Their broad white wings first seem to merely flail at the unsupportive air, but in mere moments it is as if they shake off the bonds of gravity; they break free and become ethereal creatures of the air. To me, they will always be the “angels of winter”: It is as if, in their flight, they carry on their backs the weight of the fading autumn and as if, in their long skeins and extended Vs low across the sky, they are like pure-white, aerial sled dogs dragging winter in behind them.

Sarobetsu is a vast plain that extends some 7 km east to west and 28 km from north to south in a narrowing, north-pointing wedge of land that reaches up toward Wakkanai. Japan’s northernmost national park feels remote even within Japan’s northern frontier land of Hokkaido. With hints of wildness, redolent of a swamp or taiga wetland in the Russian Far East, Sarobetsu is a place that reveals few secrets to the casual observer, though in the local Ainu language the word sarobetsu — meaning “a river flowing through marshes” — gives newcomers a start at doing so.

Standing on the top of a wooden tower commanding an impressive view, I marvel at the wild scene to the west. This too is Japan!

I look across a broad expanse of grassland, a wildflower tapestry in summer, and toward two large peat-fringed ponds, Panke-numa and Penke-numa, that are refuges for migratory wildfowl in spring and autumn, though largely bereft of birds in winter.

Beyond the rustling grasslands and the steel-cold pools lies a long strip of woodland. The trees there bear late leaves ranging in color from drab, wilting greens that carry a sense of aging sadness, to bright oranges and yellows that offer a softness to the eye and uplift the soul. Soon, persistent winds will nag and whip away at this landscape and strip the last shreds of color from the hoary silver and gray trunks, branches and twigs. But not before most of the clamoring hordes of wildfowl have moved on.

Gray fades to gray-blue then azure, and I recognize a beacon on the western skyline — the snow-fringed peak of Mount Rishiri, rising from the sea. Across this soaring vision of timeless beauty I see wavering lines as if a calligrapher with a fine-tipped brush is experimenting with ways of depicting rifts into a parallel wilder dimension.

My ever-present binoculars resolve those lines. The flashing pristine whites and shadowy grays are distant flocks of migrating Bewick’s Swans whooping their way south. Their wings, whiter than fresh snow, catch the morning sun on their measured down beats, creating soft gray shadows on the up beats. The flock’s unsynchronized beats suggest a flickering motion, their undulating progress lends them an unhurried air, though their constant whooping — half social chatter, half bickering — reminds me of excited children on an outing.

Among the white birds are others that are gray, the cygnets that hatched earlier this year at some tundra pool or swamp, and are now traveling with their parents and learning their way south. If these harbingers of winter are the angels, where are the demons?

As I watch, I see swans using Panke-numa as both a take-off and a landing strip. Some are leaving southward; yet more are arriving from sites further north, perhaps Kabuto-numa or O-numa in Hokkaido, perhaps even Aniva Bay in southern Sakhalin or Piltun Lagoon in the north of that Russian island.

Another clamoring reaches my companions and me, this time it comes from Penke-numa, and this time it is the sound of geese.

We are all ears now, as a distant roaring from the multitude heralds the sweeping arrival of a White-tailed Sea Eagle. This, the largest of Japan’s breeding birds of prey, plays havoc with the resting goose flocks, sparking fear, driving frenzy, as it cruises the lakeshore in search of prey.

Small flocks and family parties of geese have been waking and leaving their roosting site since the dawn light was bright enough to fly by, but the eagle has spooked them and they now circle in their thousands in a panic.

Their silhouettes echo those of the elegant swans, but they are darker, gray and brown, more compact and with shorter necks — and their honking is a deeper, almost gargling sound. They too are on a migration between their Russian breeding grounds and their wintering sites in Honshu. But unlike the hasty, flighty swans, the leisurely geese rest here for several weeks in autumn, commuting each early morning and late afternoon between the lake and their feeding grounds, grazing the lake and its shores and the surrounding marsh and farmland vegetation.

As I watch the geese, I see some whiffling down from on high, spilling air from their wings in a rocking motion in flight, in their haste to alight; others have their wings spread and arched as they plane in to land, their spread feet acting as air-brakes in the final seconds before touchdown.

As I take in the scene, I learn of the pattern of their movements from my companion, Marie-Jo Ikawa. Beside her a rapid clicking indicates that her husband, Hiroshi Ikawa, is already hard at work, the metal clicker device in his gloved hand counting off the birds he sees through his tripod-mounted telescope.

Geese and swans raise emotions in most who witness their migrations and their gatherings, but few are so passionate as these two dedicated researchers. They have adjusted their lives of teaching and translating French, so as to fit the pattern of the geese, tracing their movements through Hokkaido, scanning, counting, scouring the flocks for recognizable individuals, doing all they can to learn about and understand these seasonal migrants. For more than 10 years, they have spent their weekends here in Sarobetsu tracking the goose flocks, and when an opportunity arises, I join them.

On good mornings, an eagle will spook the entire flock from the lake and force the geese out to the fields, where Hiroshi and Marie-Jo do all they can to conclude a count before deer, busy farmers or overflying microlight aircraft disturb them and prevent a total count. On bad mornings, the geese linger at the lake, with only some of the birds emerging to feed (and be counted).

The majority of these flocks are made up of the large Taiga Bean Goose, but in counting them, my companions’ sharp eyes pick out oddities. Groups of the Greater White-fronted Goose come as no surprise now, though 10 years ago they were rare here. Now, they join the bean geese at the same Penke-numa roost site and at some of their feeding grounds before heading south, perhaps to Miyagi Prefecture where many regularly overwinter.

Surprises come in the form of the rarities that these seemingly magnetic flocks attract. In some years there is a Swan Goose, and in most years a few of the Lesser Canada Goose — and now, regularly, small numbers of the Lesser White-fronted Goose also pass through on their way to who knows where.

These individuals, along with a dwindling number of bean geese fitted with collars, allow them to follow the flock to learn about their movements and patterns of behavior. It was the presence in goose flocks of collared birds, bearing codes and numbers that allow them to be individually identified and followed, that inspired the Ikawas to take up a life of goose-watching. Season to season, year after year, they are building up a pattern of understanding and writing up their work for publication in scientific journals.

The geese, like the swans, follow the beating of their own drums. The rapid pulse of vibrant summer slows through colorful autumn toward the measured pace of deepening winter.

Soon they will reach the southern end of their long migration routes, gathering at some pond or lake (perhaps near you!) to roost each night and forage nearby during the day. The birds will recognize the approach of spring long before we do. Then, they will head back north toward Hokkaido and beyond as winter fades once more. I know two people who will be there, ready to greet (and count) them when they return.