Return of the Storm Rider: The remarkable story of the spectacular recovery of an ocean nomad – The Short-tailed Albatross 2 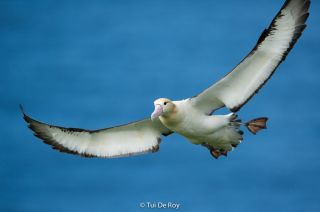 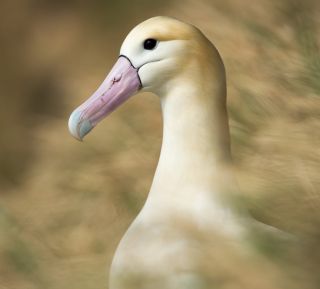 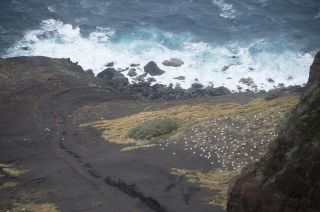 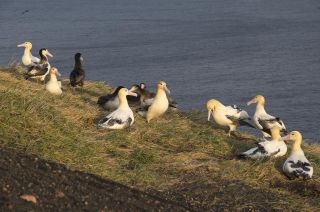 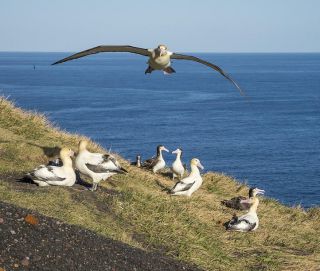 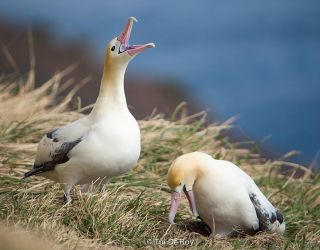 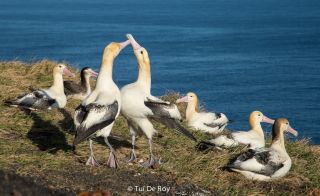 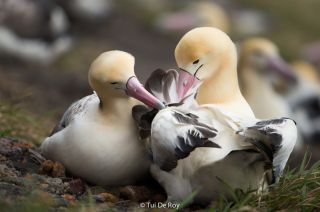 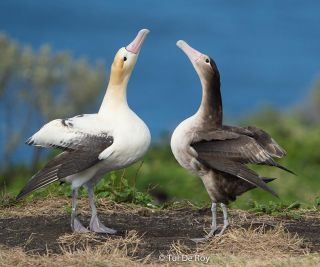 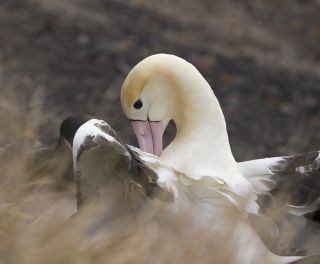 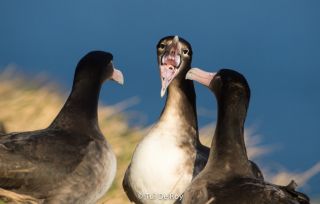 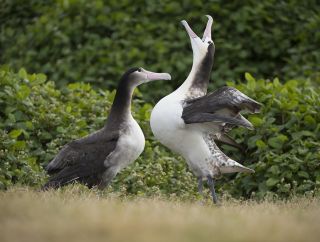 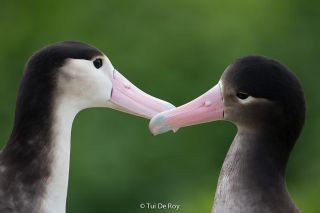 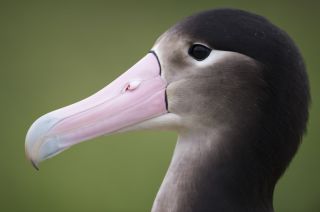 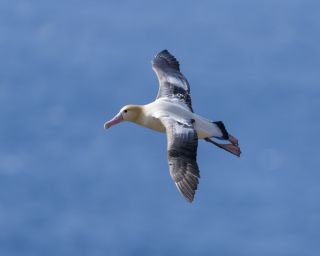 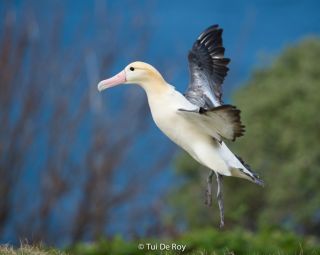 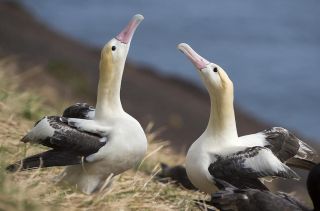 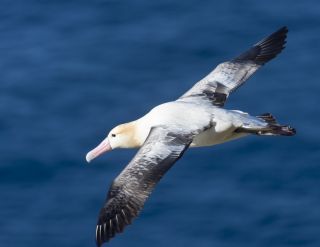 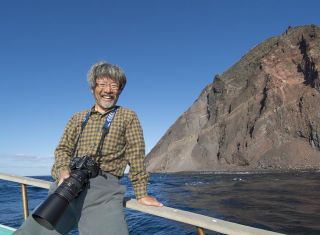 With Photographs by Tui De Roy

Known today by the oddly inaccurate name Short-tailed Albatross (its tail is no shorter than any other species) this delightful bird with its dusting of gold, was once known more prosaically and eponymously as Steller’s Albatross (G. W. Steller 1709–1746, is also commemorated in many other species names including Steller’s Sea Eagle, Steller’s Eider, and Steller’s Sealion). For much of its history its scientific name was Diomedea albatrus though that too has been changed and it is now called Phoebastria albatrus.

Weighing in at 4–5 kg, measuring 84-94 cm long and with a wingspan of 213–229 cm, this is a large and spectacular bird. The largest of the North Pacific seabirds, as an adult the Short-tailed Albatross has a golden head, a white body, back and tail, and mostly dark wings and terminal tail band. The bill is disproportionately large and pink. The youngest birds are all dark brown, but become progressively whiter with age. All have the characteristic pink beak, which distinguishes it from the other two North Pacific albatrosses, the Laysan Albatross and the Black-footed Albatross.

It forages at sea, mostly during the day, but may also forage at night, when it feeds on a diet mainly consisting of squid, but also including fish, krill and other crustaceans by seizing them from the sea surface. It will also follow ships to feed on scraps and fish offal.

This beautiful long-lived bird may reach ages of 40-60 years, and may only return to its natal island to breed after 5-10 years. In fact it may take up to ten years for them to attain their fully mature plumage.

Typically they return to their colony in mid October, build up a cup nest, and during late October and early November a single egg is laid with both sexes taking turns for 10-25 days each to complete the 64-65 day incubation period. The eggs hatch in late December and early January and both adults take turns brooding the chick, which will take c120 days to fledge. During mid or late April the adults leave the colony after having fed the chicks up to a weight that is heavier than either parent. For about a month each chick sits alone atop its nest, fasting. During that time the chick must complete its feather growth and through regular wing-beating exercises also complete its muscular development, then during May and June, if they have survived thus far, they take off on their first solo flight, they too leave the colony and head out into the Pacific.

Dr Hasegawa’s personal goal has been to pull Ahodori back from extinction’s brink and re-established at several colonies, and for it to reach 5,000 breeding pairs by 2020, by which time he will have reached his 70th birthday. Greg Balogh considers that “there is huge potential for the species at its current breeding sites, possibly allowing it to approach historical levels in the millions, with linear or exponential population growth likely to continue” with the caveat though that this will only be possible if the carrying capacity of the ocean is still there.

From just 25 birds on Torishima in 1954, by 2008 the population was estimated to have reached 2,364 individuals, 1,922 of them on Torishima with over 420 breeding pairs there (and 442 birds on Minami-kojima), clear evidence of an enormous increase since its rediscovery and the onset of conservation efforts. As Greg pointed out to me as we talked of the international efforts to save this species: “what has been achieved is fantastic, its one of the great species conservation stories going on right now”.

The apparent calm of the albatross colony is broken by the deafening sounds of the sea and the wind, and during the breeding season by the impressive vocalisations of the birds. During displays they trumpet and moan, warble and gargle, bill tap and bill clatter, stand face-to-face and rock high onto their tiptoes. When I first visited Torishima aboard La Madonna with Dr Hasegawa in 1990 and saw the volcanic rubble that made up the flanks of Torishima, the ragged red-brown cliffs and the partly stabilised scree slope on which the birds breed, I was overwhelmed by how precarious it all seemed. The island appears raw, recently forged from the earth, annually eroded by wind, rain and the sea, and the birds visit briefly each year in their unceasing drive to survive.

The open ocean of course is where these birds spend most of their lives. Like an avian cross between a wind-surfer and a powered hang-glider, the Short-tailed Albatross (and its relatives the other albatrosses, shearwaters and larger petrels) prefers not to expend its own energy when it can use that of the wind. This long and narrow-winged bird, with high aspect ratio wings exploits the fact that the wind is not uniform at all heights. It takes advantage of the differential in velocity of different air masses – those low over the ocean surface in wave troughs and those higher in the air. In this style of flight, known as dynamic soaring, the albatrosses swoop down towards a wave trough and into the lee of a wave relying on its own current speed and momentum, sometimes skimming the water with a wing tip; then it makes a turn up into the wind, and wheels back up high into the air as it is suddenly exposed to a head wind giving it tremendous lift and energy as the speed of the wind increases over its wings. Turning again it can glide downwind, repeating a distinctive wheeling pattern of flight. In this way it can travel thousands of kilometres away from its breeding colony while expending relatively little of its own precious energy.

Though it was long presumed that Ahodori dispersed from Torishima and rode the winds northwards as far as the Bering Sea, now, thanks to satellite tracking, we know just where they go. The breeding females prefer areas offshore from Japan and Russia, whereas the non-breeding birds, and adult males wander further, heading off to the Aleutian Islands, the Bering Sea and coastal North America. So, that bird I pointed out off Adak when bound for Kiska in 2010, was likely from Torishima; perhaps one of the very birds that Dr Hasegawa had ringed! Thankfully, Japanese breeding birds that migrate to Alaskan waters almost entirely miss the plastic garbage trap of the North Pacific gyre, so they are not prone to ingesting plastic waste, but such floating debris is a threat to the few Short-tailed Albatrosses that have recently begun to colonise Midway Island.

In North America, where the species is also recognized as an endangered species, the STAL (the North American abbreviation for Short-tailed Albatross) recovery plan considered the establishment of a breeding colony on a ‘safe’ island to be a vital criterion required for its removal from the USA Endangered Species List. Mukojima in the Ogasawara Island group was the chosen target.

The STAL team, with support from Friends of the Albatross within Alaska’s commercial fisheries, convinced the late Senator Ted Stevens, senior senator for Alaska, to provide federal funding for albatross recovery; that, combined with funds from the North Pacific Research Board, was matched dollar for dollar by Japan’s Ministry of the Environment, which in 2007 approved the translocation of chicks by the Yamashina Institute some 300 km by helicopter in the hope of establishing a new safe colony.

Greg Balogh, who has been twice to Torishima and once to Mukojima, explained how at first the Japanese side seemed reluctant to “engage in translocation, but having been invited to the Hawaiian islands to participate in translocation experiments with Laysan and Black-footed albatrosses there, they then got on board the translocation train and barrelled out of the station, we could barely keep up – it was heart warming to see and very impressive.” Greg feels honoured and privileged to have visited an island that few Japanese citizens can even hope to see, and he has seen first hand successfully reared translocated birds that had been hand fed and hydrated by Yamashina Institute staff “to see one of the greatest species recovery actions in play and to see how well coordinated it was, was truly impressive.”

With the successful establishment of a second colony on Torishima using decoys, a newly self-seeded third colony on the island, and the foundation of an entirely new colony on Mukojima by translocating chicks, conservation efforts for the Golden-headed Storm Rider are paying off, and as Greg Balogh told me: “… it is only going to get better as the birds translocated to Mukojima lead to a viable new colony in the years ahead.”

Numbers of albatrosses at the three colonies on Torishima surpassed 3,000 in 2011, and in 2014 Hiroshi Hasegawa, busy between visits to the island, told me that there were 609 nesting pairs on Torishima that season. He commented that if the weather was not severe during the winter there he expected to find about 425 chicks on his next spring visit, leading to a post-breeding population size of about 3,550 individuals on Torishima alone. The population of this fully protected species is estimated to be increasing at a rate of 5–8% per year. Wonderful news for a species once declared extinct!

Despite retiring from Toho University Dr Hasegawa’s wish is to “continue monitoring the population until 2018 or 2019 when the total population size will be about 5000 individuals to fulfill my dream.”