Return of the Storm Rider: The remarkable story of the spectacular recovery of an ocean nomad – The Short-tailed Albatross 1 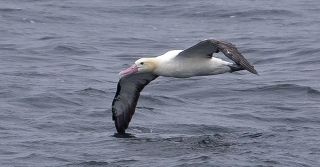 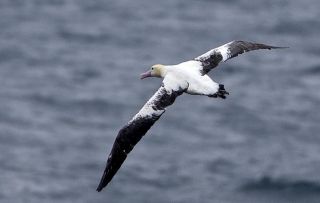 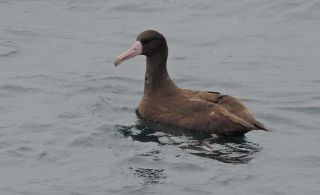 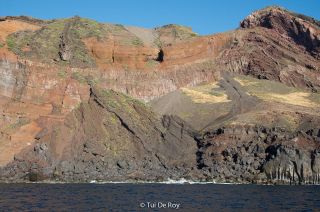 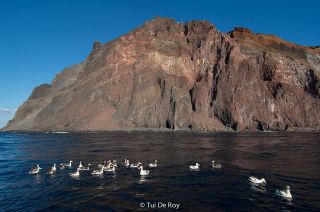 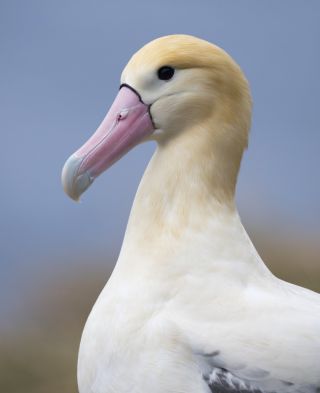 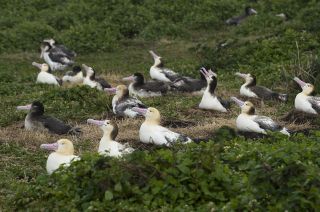 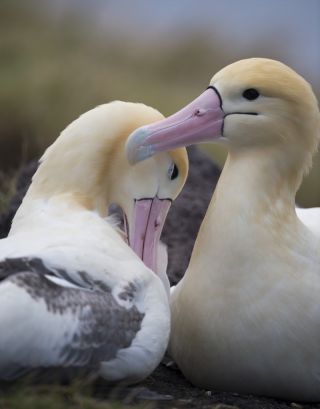 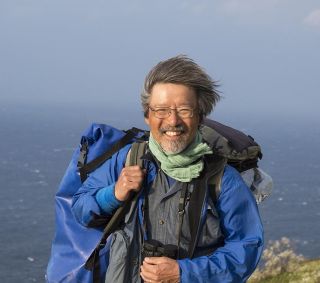 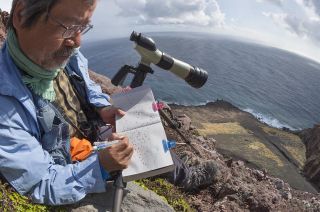 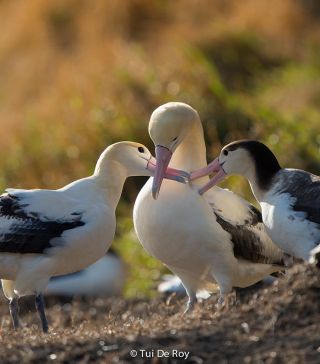 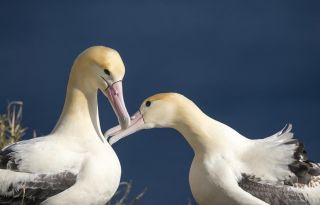 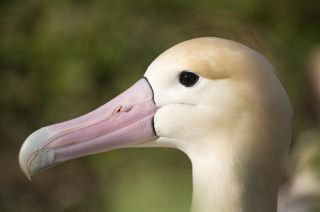 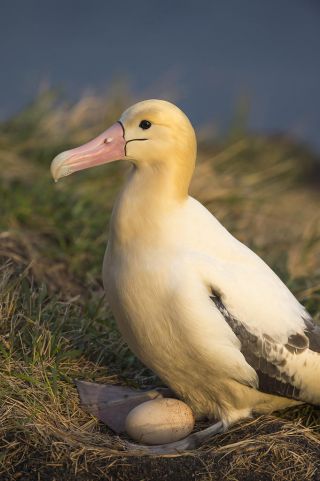 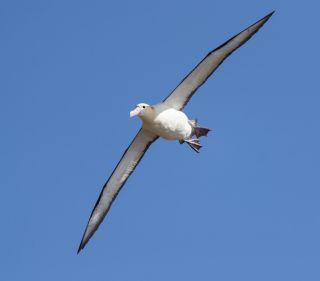 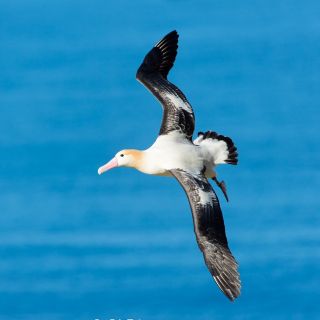 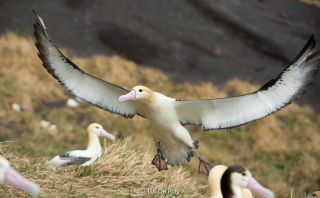 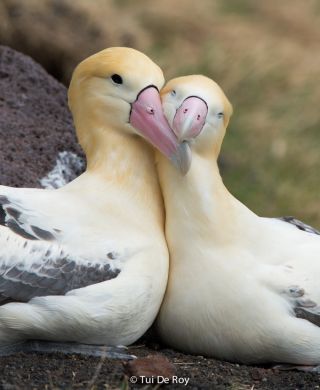 With Photographs by Tui De Roy

It was a highly pressured birding moment. It was 4 August 2010 and I was ornithologist on the deck of the Clipper Odyssey in the Bering Sea with birders on board ready to give their eyeteeth to add a species to their Alaskan and North American lists. I’d spotted an albatross at very great range and, just for a moment, as it banked showing its mantle I thought I saw a glint, a flash of white that set my skin prickling.

Only one species of albatross, the largest and rarest, in the northern Pacific region shows that plumage, but it was so far off, did I dare call it? I had one more glimpse, then, my heart racing, I pressed my radio to make the call and set birders running from all decks of the ship. Thank goodness, it banked in our direction and kept coming.

After more than five tense minutes it eventually came close enough for others to recognize it. Then it cruised past us all on outstretched wings, riding the wind – a wonderful adult Short-tailed Albatross, one of the rarest birds on earth, the Storm Rider, a Golden Gooney, on a record-breaking flight back from the brink of extinction.

My first encounter with this bird, thirty years earlier, was of a different kind in a different era when the species’ survival was precariously in the balance. 21 February 1982 found me, then a Japan novice, on a ferry out of Kawasaki, central Honshu, bound for Hyuga in eastern Kyushu. Along the way I saw an immature albatross in waters where I least expected to see one and was confused by its dark plumage, its large pink bill, and by its location.

Colleagues at the Yamashina Institute for Ornithology said there was only one person to contact for help with its identification, so tentatively I wrote a description of my sighting to Dr Hiroshi Hasegawa. His kindly reply and an enclosed photograph of a similarly aged bird confirmed my hopes and suspicions – I had noted the salient features of one of the world’s very few young Short-tailed Albatross. In 1982, Dr Hasegawa estimated that fewer than 250 individuals survived, breeding on just one Japanese island – Torishima.

A more precarious breeding site could hardly be imagined. Torishima (literally bird island) is the tiny 394 m high above water portion of an active submarine volcano in the Pacific Ocean some 600 km south of Tokyo, at the southern tip of the Izu Island chain. With a circumference of 6.6 km and an area of just 4.79 km2 the island is now an uninhabited gem, and virtually impossible to access. This remote location situated in the annual Pacific typhoon track makes it a perfect home for the Storm Riders, yet 65 years ago they were declared extinct.

Once, these gorgeous, golden-headed gooneys were numbered in millions, how many millions we will never know. Sailors told tales of a great white pillar of birds rising from the ocean south of the Izu Islands, and explorer Toru Hattori who visited the island in 1888 described their numbers in his “Torishima Bakadori no Hanashi” (The Story of the Fool-bird on Torishima) as truly incredible. Grainy footage shot by Prince Yoshimaro Yamashina (the founder of the now famous Yamashina Institute) in 1930, long after their heyday, still shows carpets of breeding birds, hundreds in each shot. Hunters, for the feather trade, strode among the placid birds wielding clubs. Today, the island’s few permitted visitors, researchers mostly, keep their distance except when wielding ringing pliers and measuring the birds, their eggs or their chicks, for the bird known today as Ahodori (meaning stupid bird in Japanese for its completely trusting nature), has become a shy, island recluse. Another resident of islands, Tui de Roy, reared in the Galapagos Islands near another rare albatross, now of New Zealand, is among the privileged few whom have been allowed onto Torishima to document this extraordinarily beautiful seabird.

Designated now as a Special Natural Monument and fully protected as such, Ahodori was once the focus of an extraordinarily destructive industry – that of Han-emon Tamaki. Between 1886 and 1922, the Tamaki Company housed 300 people on Torishima, built schools for the children and even a light railway, all for one purpose, that of obtaining and transporting albatross feathers! These large seabirds with their dense plumage produce the ideal pure white material for stuffing pillows and quilts, suitable even for export. Tamaki Company workers killed between 100-200 birds each a day, and Dr Yamashina estimated that by 1902 at least five million birds had been culled.

In terminal decline, because of over-harvesting, the birds were further vulnerable to nest trampling by introduced cattle, but more significantly to the island’s volcanic nature. In 1902, all 125 of the people then living on the island were killed in a massive volcanic eruption, though that didn’t stop Tamaki from re-establishing his company the following year; nevertheless the harvest was unsustainable and the decline of the birds was inevitable.

Dr Yamashina estimated that only about 2,000 birds were on the island in 1930, fewer in 1932 and fewer than a hundred in 1933. A last minute scramble for feathers before a hunting ban could be enforced seems to have been the penultimate nail in their coffin, the final one coming with the catastrophic volcanic eruptions of 1939, when the island was evacuated, and 1941 when much of the island was covered with new lava.

By spring 1949, when Oliver Austin, Jr., ornithologist of the General Headquarters Supreme Commander for the Allied Powers, sailed south to the Ogasawara Islands via Torishima, he found no albatrosses there, during what should have been their breeding season. The golden gooney had gone; it was presumed extinct. And there the story of another species driven to extinction by human greed, expansion or resource extraction might so easily have ended, had this particular island species not been a long-lived oceanic storm rider.

Spin the clock forward six decades and there is a world of difference. If Han-emon Tamaki’s goal was to destroy the Short-tailed Albatross for personal gain then he almost succeeded. Another Japanese individual though, Dr Hiroshi Hasegawa, was inspired in a different direction and made it his life’s work to help resurrect this bird for itself, and for future generations. His efforts were aided and abetted by particular aspects of the Short-tailed Albatrosses’ biology – they live for several decades, are supremely loyal to their nesting sites, and don’t even attempt to breed for at least five years, and they can survive indefinitely at sea.

Torishima’s position slap-bang in the annual typhoon track made it an ideal location for the establishment of a manned frontline meteorological observatory in the late 1940s, and so humans returned to the island. It was in January 1951 that Shoji Yamamoto of the observatory stumbled upon a tiny group of albatross colonists on the steep scoria slopes of Tsubamezaki (Swallow Cape). Following the rediscovery, of this tiny colony, perhaps birds that had wandered at sea for years, meteorological observatory staff made voluntary efforts to eliminate feral cats, and stabilize nests at the breeding site. In the early 1960s Dr Yamashina sent researchers annually from the Yamashina Institute for Ornithology to monitor, document and ring the birds, but in 1965 the weather observatory was closed and Torishima became uninhabited once more, and access became almost impossible.

Nearly a decade later, in April 1973, British ornithologist Dr W. L. N. Tickell, and Masashi Yoshii from the Yamashina Institute, who visited Torishima by British naval vessel, were able to count 24 albatross chicks, and confirmed that the population was growing, albeit very slowly. More importantly, it was Lance Tickell who inspired the young Hiroshi Hasegawa to take up the baton for the bird, pointing out to him that as the Japanese people had been responsible for their near extermination it was their responsibility to oversee its recovery. Inspired and motivated, Hiroshi Hasegawa took that responsibility deeply to heart. He is a species champion, for what is arguably the North Pacific’s most beautiful seabird, and since his first expedition to Torishima in 1976 he has devoted decades, and more than 100 subsequent expeditions, to defending and promoting Ahodori. He has made saving Ahodori his personal calling and his life’s work.

Greg Balogh (of the US Fish and Wildlife Service Biologist and former lead for the US Short-tailed Albatross Recovery Team in the USA) said of Hiroshi Hasegawa that: "…he has done more to raise the awareness of the plight of the Short-tailed Albatross than anyone on the planet.” “…he is like a modern day samurai fighting for conservation...”

Recently retired (March 2014) from Toho University, Dr Hasegawa began with ringing and breeding studies, but recognising that the steep slopes of volcanic debris that make up the Tsubamezaki nesting grounds are inherently unstable, so he pushed hard for erosion control and slope stabilisation. Japan’s Environment Agency (currently Ministry of the Environment) at last stepped in and began erosion control using native grasses in 1981–1982 and subsequently added earthworks to help direct run-off water safely away from the site. Another tiny colony had been discovered on another precarious island, Minami-kojima (Senkaku), territory now, unfortunately, the subject of dispute between Japan, China and Taiwan, but where Dr Hasegawa was able to confirm breeding in 1988. The need for protection on Torishima was continual as each season wrought more erosion, so next came Operation Decoy, using playback and decoys there since 1993 to tempt new breeders to a different safer nesting location on the island, and with pairs beginning to nest there in 1995 a second colony was successfully established, though still on the same island.

Historically there may have been as many as fourteen breeding colonies south of Japan and in the East China Sea, but like that on Torishima these colonies were easily raided, depleted, then exterminated by feather and egg collectors. Fossil evidence from Bermuda suggests that prehistorically the species even ranged into the Atlantic. The current, anomalous North Atlantic gap in albatross distribution may once have been filled by the gorgeous Golden Gooney.

With thanks to Tui De Roy for so kindly allowing me to use her fabulous photographs to accompany this article.