The Atlantic Puffin is both cute and comical, with its enormous bill and bulging cheeks.

Reflecting on icons of 'cute' 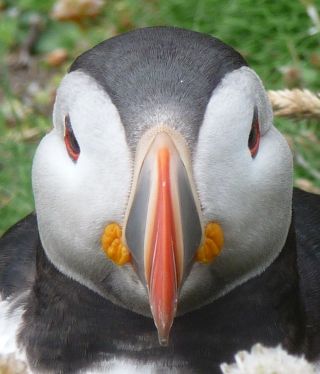 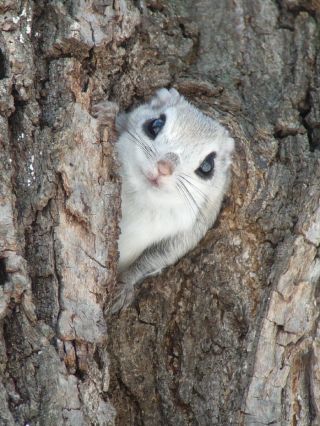 Although watching wildlife is not for everyone, countless hordes of visitors flock to zoos when tiger cubs or a Giant Panda baby first go on show, when penguins are on parade, or when young animals are present in the petting section. Why is that?

Likewise, birdwatching is not for everyone, yet there are certain birds that have universal appeal extending far beyond the interests of birders, and there are some that people just love to collect in one form or another, whether as soft toys, ceramics or in illustrations. Penguins, owls, cranes and puffins are all birds that most nonbirders are attracted to. Why is that?

Memorabilia featuring the iconic groups of birds are among the most popular wildlife items I see being purchased. I even know one person who likes to collect things adorned with or representing Hoopoes (a colorful, curve-billed migratory species), and others who favor one particular species over another — but that perhaps represents a rather more specific collecting bug.

Why is it that we humans find certain other species more attractive than others? And why do we find the young of animals so appealing? Could it be that they have “cute” appeal?

Austrian Nobel laureate Konrad Lorenz was early on the scene in many fields of biology, including investigations into the science of cuteness, and it was he who drew together the factors (aesthetic and behavioral) that seem to attract us. He found that we humans find appealing: relatively large heads; large, low-lying eyes; bulging cheeks; short, thick limbs; springy elastic skin; and clumsy movements. All these features are typical of human infants.

It is widely considered that it is largely the facial characteristics of infants that elicit care-giving behavior in humans. Certainly that is something the film and manufacturing industries here and overseas seems to have capitalized on in producing characters that increasingly resemble children in their proportions. Toys, especially dolls and soft toys of animals or similar characters, perhaps most clearly exemplify that kind of replication.

Scientific research, including that by Maestripieri and Pelka in 2002 (published in Human Nature), has further indicated that human responses to baby faces relate to biological adaptations for parenting, while research published earlier this year (in a paper in the journal PloS ONE in May 2011, by Parsons, Young, Kumari, Stein, and Kringelbach), has shown that this appeal applies both to men and women.

While these cute aspects are typical of human infants, they also apply in some senses to our perceptions of other species.

Some species more than others — including pandas, koalas, owls, flying squirrels and puffins — seem to fulfil those criteria, as do the young of many other species.

When I am leading nature tours, the common responses among my guests on first sighting a Bengal Tiger in the wild in India, include: awe at their size and strength, astonishment at their crypsis and stealth in their forest environment, and concern over their long-term future in a market economy that drives poaching of their skins, bones and whiskers. But those responses don’t include a perception of them as cute. Nevertheless, a young tiger cub, whether in the wild or in a zoo, immediately attracts attention because of its cuteness, in the same way as a puppy or a kitten does.

In contrast, the first responses I encounter among non-ornithologists to puffins almost invariably relate to their comic character or their cuteness.

The puffins belong to an exclusive club, as there are just four species in their subfamily known as the Fraterculini. They are all in the Auk, or Alcidae, family, although debate continues over exactly how many genera they belong in. During recent years I have taken to the water and retreated northward from the heat of summer in Japan into the cool North Pacific Ocean and the Bering Sea of Russia and Alaska, where three species of puffins — the Horned, Tufted and Horn-billed (also known as the Rhinoceros Auklet) — all abound.

This summer, breaking with that tradition, I traveled north up the western coast of the British Isles to the Faeroe Islands and to Iceland, and there became reacquainted with the fourth species, the puffin of my own youth, the Atlantic Puffin.

I was first introduced to Atlantic Puffins while still a boy, during a family holiday to Yorkshire in the northeast of England in the late 1960s. I recall a day of such pouring rain that my parents questioned whether I really wanted to go out and see the seabirds. Even today, I remember with great fondness the sensation of standing, soaked to the skin, while soaking in the overwhelming sights, sounds and smells of my very first living, pulsating, whirring seabird colony — in fact the largest concentration of breeding seabirds anywhere on the English mainland (on Bempton Cliffs, near Flamborough Head in Yorkshire).

Gannets — massive, almost albatross-size white and black fish-hunting seabirds — and Guillemots (black and white flying penguinlike diving seabirds — filled the air, but it was the puffins that entranced me. Really, I have no idea how my mother coaxed me back in from that rainy, windswept clifftop, because I was in heaven — though I don’t think “cute” was even on my mind then.

Think of Lorenz’s six criteria for cuteness, though, and puffins score a clear five out of six with their large heads, low-lying eyes, bulging cheeks, short limbs and clumsy movements. It’s little wonder that even nonbirding visitors to the North Atlantic or the North Pacific oceans want to see puffins.

Puffins are birds with attitude. They are dumpy, short-winged, barely able to fly — but consummate divers. They have bright bills and feet, and are distinctively counter-shaded, black above and white below, rendering them less visible from above and below when they are swimming at sea.

Puffins are tough, resourceful and supremely adapted to the marine environment in which their diet consists largely of small fish such as sandeels. Their lifestyle roaming enormous tracts of sea for the major part of the year — from mid-ocean to northwest Africa in the case of Atlantic Puffins — justifiably earns them the soubriquet pelagic.

Like other seabirds, however, they must visit land to breed once each year. They seek out safety and security from the attentions of terrestrial predators and so find themselves more often than not on isolated offshore islands or on precipitous cliffs. There, they nest in crevices or cracks (Horned Puffins) or dig their own burrows into the soft, fibrous turf atop the cliffs (Tufted Puffins, Atlantic Puffins and Horn-billed Puffins), and raise their single chick.

As dusk falls on late summer days, as the season begins to fade, the young puffins leave the safety of their natal burrows and head out to sea — alone. They have a precarious existence ahead of them. The distribution of their prey shifts and changes in a fickle manner, as the ocean currents and sea-surface temperatures themselves change. They must weather their winters at sea, and when old enough must find their way back to their very own puffinry. There, they must compete for a mate, for space, and be able to commute back and forth to feed their chick between the colony and their ever-shifting feeding grounds. It’s a tough life. Yet we find their curious demeanor, their puff cheeks, their waddle-walk, whirring wings, and bizarre bills comical and cute.

The humanlike face of an owl, with its forward-looking eyes; the upright stance of a penguin, dapper in its dinner-suit-like plumage; and the puff-cheeked face and comical, ungainly waddle of a puffin — all these serve to give them their broad appeal.

Although it is the least cute of the four, the Horn-billed Puffin (or Rhinoceros Auklet) is abundant around northern Japan. The largest colony in the world is on Teuri-jima Island off western Hokkaido, and visiting them there during their summer breeding season in May, June and July, and to witness their daily return from the ocean at dusk, is to see one of the greatest wildlife spectacles in the world. It’s already time to plan ahead for next year’s summer holidays!