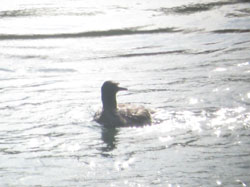 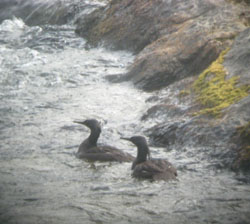 IT'S ALL RELATIVE, OR NOT

Stepping outside this morning, I heard a skylark singing above the open field adjacent to where I live. It’s a rare event for me, but perhaps you hear skylarks all the time. Then again, perhaps you have never heard that silvery cascade of notes pouring endlessly from high in the sky.

When naturalists or scientists talk about events as being common or rare, what exactly do they mean?

There are so many definitions of “common” that I won’t even go there, but “rare” has a ring to it that suggests it may be easier to tie down. However, it’s not quite so easy — but perhaps easier than “common”!

Thinking at the species level, a once-common species may go into decline and so become rare; or, a recently evolved species may still be rare even though it’s destined to become common; or a species may be restricted in some way, perhaps by very specific habitat requirements, so that it has always been rare and will likely remain so.

If we take a single snapshot in time, we see only “rare” as it is at that moment. In other words, without the benefit of passing time, we cannot tell which of these three kinds of “rare” a species is. Time, then, is the dimension that helps us define rare.

But there are other contexts and other ways of reflecting on this thorny subject.

Globally, the red-crowned or Japanese crane is a rare bird with a very low population. They are rare, and when I was growing up in Europe I marveled at the thought of seeing such a rare species. But had I grown up in eastern Hokkaido, it would have been a familiar bird of wetlands and farmland, because approximately 1,000 of them live there.

I now happen to live in Hokkaido, and I can see them every day if I wish. Not only that, but thanks to active protection of the birds and their habitats compared with 15 or 20 years ago, there are almost twice as many here. So to a certain extent, rarity depends on context and the area you consider.

The jaguar, for example, is so infrequently seen that it might be construed as being rare, simply because few naturalists have ever seen one. Yet jaguars range widely through Central and South America. The skylark is not a rare bird in Japan, but where I live it is an unusual sight, simply because there is so little suitable habitat around here. In Britain, however, this once-abundant bird is in serious decline. It is not yet rare, but it may become so soon enough.

Defining the context when discussing rarity is an absolute must. We might consider local, national, regional, continental or global scales, and while something may be rare in one location it may be common in another. But at the greatest extreme, something globally rare really does face an uncertain future.

Take the Brazilian merganser, for example. Though not the most colorful of birds by any means, I can hardly remember being as excited as while watching a pair recently just outside Serra de Canastra National Park in Minas Gerais state in Brazil. This species is not only one of the rarest birds in Brazil, or in South America, but in the whole world. Its status is classified as “critical,” and fewer than 250 individuals are left in the world!

How can a bird can be so rare?

Well, the answer in this case lies in its very specific habitat requirements. Each pair requires a lengthy stretch of a fast-flowing river, complete with clear pools and rocky rapids and plentiful prey. They can also only inhabit rivers that run through forested areas, because these ducks nest in cavities in tree trunks. They are sensitive to the loss of riverine forest, to pollution, to damming of their nesting rivers and to disturbance during the breeding season.

Furthermore, they only live in one area of Brazil. Hence this is a truly, globally rare species, deserving of our greatest attention lest it slip into oblivion.

One species that seems to have slipped into oblivion, either this year or last, is the Baiji or Yangtze River dolphin. What a sorry state of affairs the world is in that we don’t even know exactly when we lost it. Not some tiny bug or beetle, not some obscure nocturnal moth — but a large freshwater dolphin that has existed for millions of years . . . but which we have pushed into oblivion.

That so few care, that so few see the effects of our actions, reflects the astounding hubris of the human race in the 21st century.

As the impacts of global warming begin to affect all our lives, perhaps we will increasingly realize our past folly. Tracking the consequences of our folly, May 2007 reports from Birdlife International indicate that this year, 1,221 species of birds are now recognized as facing extinction. Add to that a further 812 species considered near-threatened, and more than 2,000 species (some 22 percent of all birds) are now urgently in need of conservation action. It is conceivable that in the lifetimes of you and your children, we could lose 20 percent of the world’s bird species.

Among the birds now recognized as of great concern are five species of vultures, while 19 of the 22 species of albatross are threatened with extinction. The last-known po’o-uli, a bird confined to Maui in the Hawaiian islands, died in captivity in 2004, though for many editions to come, textbooks will no doubt still churn out the facts of the extinction of the last passenger pigeon (dubbed Martha) in Cincinnati Zoo in 1914.

Taking individuals into captivity has been used as a last-ditch rescue attempt for a number of species, and in some cases a measure of success has been achieved.

The Mauritius parakeet is one such species showing encouraging signs of recovery thanks to the captive-breeding and release of birds into areas where predators are being controlled and artificial nest sites are being provided.

Meanwhile, on Inaccessible Island, also known as Tristan da Cunha in the South Atlantic, the removal of feral pigs has allowed the population of spectacled petrels that breed only on that island, to recover from a low of just 1,000 pairs in the 1980s to 10,000 pairs by 2006 — allowing their status to be downlisted from “critically endangered” to “vulnerable.”

Conservation can be successful, when resources and political will are marshaled in the right direction.

It can only be imagined what might have been achieved for conservation if the manpower and the $400 billion already spent on the Iraq “war” could have been directed toward planetary care and species custody.