Przewalski's Horses in their vast, natural range in Mongolia 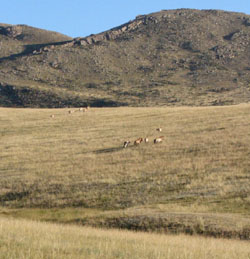 Imagine, if you can, the prehistoric cave-wall images of Lascaux in France springing to life, the animal likenesses breaking free of their multimillennia entrapment in pigment and rock.

Imagine the blurred world of those days snapping back into focus and those ancient creatures reclaiming their rightful haunts.

Imagine a journey back in time some 16,000 years, to the period when artists were decorating those and other caves in present-day France and elsewhere.

There is something of that feeling of “timeslip” in a visit to Hustai National Park in Mongolia. A drumming of hoof beats; endless blue sky; a breeze rustling tall grasses; freedom with no fences — all of these remind me of Hustai. This is a place where an ancient creature roams free once more.

Early morning exploring the main valley running through the park; a flicker of wings, a flash of gray, orange and white indicates a splendid male Amur Falcon swooping down to pounce on a hapless grasshopper. A lolloping, fat-cat shape with a bushy tail pauses, looks about before disappearing into its mound — a Siberian Marmot; while a slender squirrel-like creature bounding away in the grasses is Central Asia’s answer to the ground-squirrel, known as the Long- tailed Souslik.

Meanwhile, along a high ridge, three silhouettes, stark as if cut from paper, are a trio of Red Deer stags.

All these are exciting, but they are not my target.

Scanning is crucial in order to find wildlife, and for every minute spent actually watching an animal, many more minutes must be spent in careful searching by eye, with binoculars and with a telescope.

In these days of sound-bite-long attention spans, it is hard to maintain focus, to keep alert when action is not evident, but the eventual rewards are always so worthwhile. Sometimes those rewards come suddenly, unexpectedly; at others it is just a matter of checking off sufficient well-frequented haunts and eventually — there they are!

I was out looking for horses. Not just any horses; these are of ancient stock. These are Przewalski’s (aka Che-val-ski) Horses, otherwise known as the Mongolian Wild Horse, or Takhi Equus przewalskii.

So closely do they resemble the antiquated illustrations of the Eurasian Wild Horse or Tarpan of Lascaux that they could have galloped straight from those very walls.

Although these horses have not sprung from imprisonment in ancient cave art, they have sprung from dungeons of a different sort — confinement in captivity.

These beautiful creatures are named, somewhat surprisingly, after Russian Gen. Nikolai Mikhaylovich Przhevalsky, who was also a geographer and explorer who made several expeditions through central Asia in the late 1800s, and passed through the land of the wild horses.

Although he was not the first outsider to see these animals, he was the first European to describe them, and their name today is derived from the Polish spelling of his name.

Subsequent expeditions at the beginning of the 20th century were able to capture a number of individuals that were taken to zoos in various parts of the world. Thank goodness they were, because during the late 1960s the very last herd of wild horses was wiped out, lost to hunting and competition with domestic stock. Without that captive population, they would have been lost for ever.

The herds of horses I encountered in Hustai (also known as Khustain Nuruu) were going their own way, grazing across high hillsides, disappearing from view into scattered patches of birch woodland, reappearing when least expected — alert, social and truly wild.

Admittedly, for several generations their ancestors survived only in captivity, but they had never been domesticated and their genetically encoded natural instincts immediately fitted them to life back in their natural habitat — once a site for their reintroduction was chosen and their return to the wild began in 1992.

Despite my training in biology, I still find it amazing to contemplate how coded information passed from parent to offspring and unused for generations waits merely for the right circumstances to express itself. That it does so successfully is revealed in the way these creatures have taken to their homeland surroundings.

They are striking creatures, stocky and strong with heavy heads; they are distinctively deep in the jaw, they have no forelock and have a short dark-brown mane that stands erect. Although they vary in color, most are tan; some are so pale as to appear almost white, others darker than the average, but all are paler yellowish-white on the belly and have darker lower legs and characteristic narrow stripes on those legs.

These are not domestic horses gone wild, like the mustangs of North America; these are an entirely separate species and the suite of visual characters that distinguish them is underpinned by a significant genetic difference — they have 66 chromosomes, not the 64 of domestic horses.

In the past there were many different species of wild horses, but Przewalski’s is the only one surviving, making it truly precious.

With success in Hustai, others have been reintroduced elsewhere in Mongolia and, recently, in China, and these reintroduced populations are climbing, albeit very slowly. Nevertheless they are climbing; at Hustai there are now nearly 200. Each year around 44 percent of the newborn foals succumb within the first month to the horses’ natural predators — wolves — but once past 3 months of age their chances of survival are very good.

When that population climbs beyond 500, then conservationists will have deemed reintroduction successful. Almost halfway there!

Through my telescope, I pick out the dominant stallion walking across a hillside, not exactly with his herd, but nearby and watchful. Several mares are in his group; one will be dominant, the others subordinate; but to the casual observer distinguishing them is not possible. Several have young of 1 or 2 years of age. They move loosely together, grazing unconcernedly. Only disturbance brings them closer — as they sense danger, the scent of a predator, the sound of intrusion or another stallion nearby — they gravitate closer to one another. At night they will gather even more closely, and closer still when wolves are about.

Later in the day a different group is on the same hillside — their numbers, the number of foals and a distinctly pale mare — indicate that they are not the same herd. This, though, is not so strange because rather than maintaining a territory, each herd wanders through an extensive home range, their paths crossing without conflict. They leave their calling cards, these stallions and mares, through their distinctive scent marks. In fact they all live in a world of scents, sounds and sights, and scent alone is sufficient to indicate membership of a particular herd, or to distinguish family from neighbor.

The long-limbed elegance of the foals, the steady stolidness of the mares and the powerful presence of the stallions all mask the fragility of this species’ survival.

It’s a species, in fact, that could so easily have gone the way of so many others, pushed to oblivion by human ignorance, competition and greed. We might only have known of them through ancient cave art, but thanks to dedicated conservation efforts they are now roaming wild and free once more.

Anyone with a love of horses should make a pilgrimage to Mongolia, to Hustai National Park, to watch these herds reclaim their natural birthright — and long may they enjoy it.