A 'monkeys seat' bracket fungus on a silver birch

On the woodland trail of sprites and fungal delight 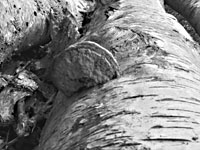 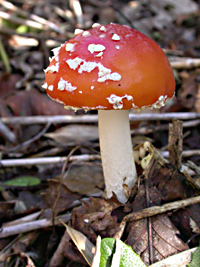 Common sounds in the hill forests of northern Japan these days are the thin “tsiping” calls of Black-faced Buntings elusively flitting through the dwarf bamboo, as enormous numbers of them head south to milder climes.

Meanwhile, higher up in the canopy, amid the calls of resident woodpeckers, titmice and nuthatches, are larger but equally elusive thrushes.

Ahead of the wave of Dusky Thrushes that will soon spread south across the country, the Eyebrowed Thrushes have already arrived. Their elegant, gray and finely white-lined facial features are a real treat if you can set your binoculars on them. However, they have an uncanny ability to whisk through the treetops and invariably perch out of sight behind a branch, leaving only their whispered calls and soft chuckles as evidence of their presence.

On a recent hill walk, I heard a softly whistled “weet” coming from the mid-levels of the forest. With my pulse already elevated, I imitated a soft “tuctuc” — and the hoped-for answer came. Alternately whistling and tuctuc-ing, I willed the bird to come closer, and was finally rewarded by the sight of my favorite forest sprite, the diminutive Red-flanked Bluetail.

Its name alone is enough to enervate any European or American birdwatcher, in whose homelands this is a great rarity accorded the status of Sibe (Siberian) as if some hallowed species. It’s the kind of bird that European twitchers will travel through the night for, camp out in the rain for, and stand in a mob of several hundred other birders just in the hope of gaining a glimpse.

Here we are fortunate, for the Sibe is a breeding species in the north, and an uncommon visitor potentially enlivening any winter woodland walk in central and southern Japan.

There is something undeniably cheerful about the way this perky forest sprite, bearing flashes of burnt orange on its flanks and cobalt blue on its tail, flits through the forest, generally alone, though my most lasting sighting was of a male and a female together.

As the Sibes move down the country, so too do other exciting migrants. The last of the summer flycatchers are leaving, but the arrival of the winter thrushes is always something to look forward to. Soon Dusky Thrushes will be stripping alpine vegetation of its berries before moving on to feast off the lowland forests’ berry-bearing climbers and trees.

But the season of migrant thrushes is distinctive for another reason. At this time, the very scent of the forest changes — though this year to the normal seasonal scent has been added that of broken and crushed timber. The devastation to Japan’s forests wrought by the recent typhoons has to be seen to be believed.

Prime-time news has not surprisingly focused on landslips and mudslides, flooded roads, houses and the impacts on inhabitated areas. Strike off the broader beaten trails, though, and you’ll find swaths of sylvan carnage.

Poorly managed, unthinned plantations have fared the worst. There, trees have grown tall and thin in competition for limited light, leaving them with shallow root systems and little trunk strength. As a result, the typhoon winds have had them swaying like bamboo until their trunks either shattered or root mats failed and down they came like dominoes — one knocking over the next.

The native mixed forests have fared better, but have not been spared. There, massive conifers, huge oaks and birches have been battered, shattered and frequently downed.

Even where the trees have withstood the blasts, very often their fruit or nut crops have not. I walked a trail very recently to a steady crunching sound of acorns underfoot. No doubt rodents are having a field day, given the unexpected bounty on the forest floor. Later in the season, however, once the ground is snow-covered and the trees are bare, birds and squirrels that would have fed on them in the tree tops, carrying some away for storage, will find foraging harder than usual.

Given that so many of the felled trees are the older larger ones, in the breeding seasons to come, creatures such as flying squirrels, bats, titmice and nuthatches that nest in natural cavities, or ones abandoned by woodpeckers, will also find refuges in short supply.

But surely all that downed timber must be good for something? Indeed, fungi will do well, as will the various beetles that bore and drill into decaying wood. There are benefits for some groups of species in every situation.

Despite the dampness and early morning chill, there is a wholesome earthiness to the forest bouquet at this season, a mixture of fine loam and fungal scents. As I walk in the forests now, I am torn between trying to catch glimpses of forest sprites and finding fungal delights.

Movement draws my attention, often a bird, sometimes an Asiatic Chipmunk; I spotted one last week, its cheeks bulging with fallen nuts and its mouth filled with leaves, as it scurried along the trail then ducked surruptitously into its hibernation den concealed in a rotted tree stump.

But splashes of color and contrast are also hard to miss. White stands out surprisingly well on the forest floor. Here and there I find soft, golfball-size puffballs. White and firm when fresh, they are edible, but they brown as they age and when fully ripe, a tiny pore opens at the top. Watch these when rain is falling and one of the mysteries of fungal dispersal unfolds. Heavily falling rain drops strike the leathery outer skin of the puffball, compressing it and forcing a whiff of air out of that apical pore. That whiff carries with it many thousands of dustlike spores. The puffball’s elastic skin then bounces back into shape, sucking in a tiny breath of air, and as the next raindrop strikes, so another blast of spores is emitted to be spread on the wind.

If you are lucky you may encounter another of the puffballs, one that appears to bear a ring of petals. These “petals,” though, are the outer skin that has split and curled back to reveal the inner sac containing spores. The petals curl outward in damp conditions, then inward when it is dry, earning this little fungus the name of Barometer Earthstar in some parts of the world.

But spying a bold blast of red on the ground beside the trail, I am drawn to one of the best-known of all fungi. It crops up in children’s storybook illustrations as a home to forest imps; it appears as Christmas tree decorations; and it has long been used as a stimulant and has been identified as the Soma of the ancient Rig Veda, the sacred drug of the ancient Hindus.

This is the beautiful Amanita muscaria. But beware beauty. This blood-red- or orange-red-capped Agaric with white flecks on its otherwise smooth cap is not uncommon in forests with conifers, and it packs a mixed punch of ibotenic acid and muscimol, making it hallucinogenic, psychoactive and poisonous. The Norsemen were renowned for chewing them to speed their reactions and make them fearless in battle, while some have even claimed a role for them in the shaping of world religions.

There is so much going on in the autumnal forests, and I haven’t even mentioned the amazing colors!