A Small Japanese field mouse — a snack for them all.

Of predators and prey 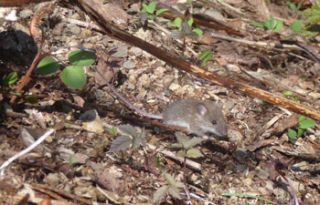 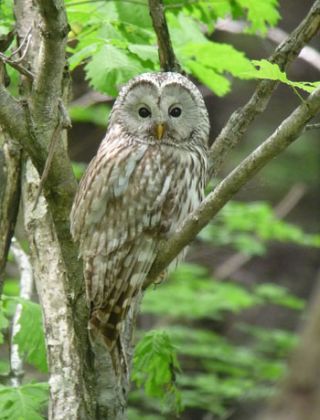 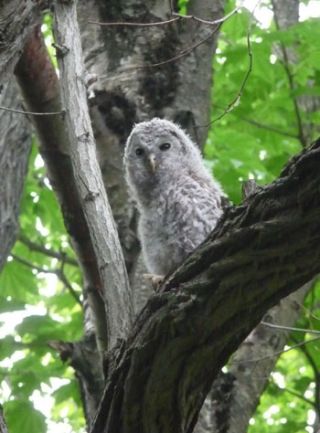 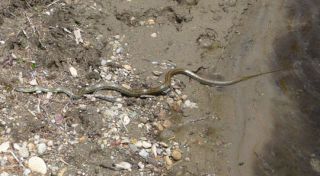 The forest floor is a maze, a tangle, an adventure — all depending on one’s scale.

Stems of sasa (dwarf bamboo) obscure much of the ground. Here and there the dark-leafed stems of evergreen Japanese plum yew sway gently, contrasting with paler, newly grown vegetation. Sunlit patches of ground are covered with wild flowers; scattered white-blooming trilliums and anemones are now taking over as the blue corydalis fade, while tiny purplish-blue violets crowd the sides of the trail.

Until recently, many of the steep sunlit slopes in the mountains of west Hokkaido, where I live, were covered with pink houndstooth violets, their long pointed petals atop tall stems turned back and pointing upward in the fashion of a cyclamen. Not long ago, a mere few weeks back now, when those kata-kuri began flowering they created one of the few splashes of color amid the monotony of the forest still mainly not reawoken from its winter slumber. A little earlier, those same slopes were covered with late-lingering banks of snow. Now, bright azaleas cast their loose sprays of color against the greening foliage of the mountain woodland’s slopes.

From fresh, pale green just a matter of a few weeks ago, the deciduous forest tones are already deepening and showing hints of darkening summer foliage. That foliage, though, is never as dark as that of the cedars, cypresses, conifers, pines, spruces and firs that glower over so many of Japan’s hillsides in serried ranks of forestry plantations — or even of those that grow in shady, sombre stands interspersed naturally in wild, unplanted forests.

Insect life, so recently scarce at these northerly latitudes, now marks each and every foray into mountain or woodland. Some — the gorgeously colored butterflies, damselflies, moon moths and hawk moths — are welcome like fond friends, their familiar patterns and movements bringing back treasured memories of past encounters.

Others evoke emotions more akin to distaste. My hands, forearms, elbows and legs even now still itch from the attentions of aggressive black flies and mosquitoes encountered during recent excursions, but that temporary discomfort is part of the price to be paid for entering their world. Biting insects seem to be instinctively drawn to me, as if preternaturally aware that my blood is tastier than that of any companions I happen to be with. Their abilities remind me of aggressive dogs that somehow sense fear in children, or of street beggars able to home in on the sensitive and soft-hearted tourist.

On a recent foray, a slight, almost subliminal movement across the brown litter of the forest floor somehow caught my eye. Several seconds later I was again barely aware of movement, and then there it was, as if its flickering, frenetic, high-speed motion had somehow been slowed down frame by frame to a speed at which I could discern it. A brown-furred back, a long slender tail, large rounded ears and glossy black beads of eyes — it was a rodent known as the Small Japanese field mouse. It paused in the open then dashed for cover. Yet even there, where it believed itself hidden, it was more exposed than it realized — and even I could make out the short fur darkening to a warmer brown across its neck as it crouched among early fresh leaves. Had it known what I know about the predators living in these woods, it would have been off and down a burrow at the double.

It’s a naturalist’s lot to spend a fair amount of time poking among poo while trying to discern the diet of secretive and nocturnal mammals and birds from the deposits they leave on prominent stones, fallen logs or on the trail.

This spring, in Red fox and Tanuki droppings, and in owl pellets, I have found plenty of hairs, indicating their predilection for small furry creatures among other elements of their diet. Foxes in particular like voles and mice, but their typically nocturnal habits may have lulled this mouse into a false sense of security, or perhaps it was soporific in the warmth of the sun and oblivious to its danger.

I regularly encounter shrews, or at least the bodies of them, lying on forest trails. Dead, but not eaten, I suspect they may have fallen prey to the pounce of a hunting fox instinctively driven to catch and kill anything small and furry that moves — only to find it was a distasteful shrew.

Voles, mice and shrews, as they forage above ground, must be ever watchful and also listening out for predators. Even when taking refuge below ground, they are not entirely safe, because warm weather has by now tempted snakes out of hibernation.

By this time of year, too, the danger for small rodents has recently increased dramatically with the fledging of another season’s “crop” of aerial predators.

In late winter, the rough, hoarse cries of the Ural owl indicated that Japan’s second-largest and most widespread owl was living in my neighborhood forest and in search of a large tree cavity in which to make its nest. Through the cold spring months, pairs of these nocturnal owls will have mated, laid their eggs and reared their chicks — but now, as summer’s warmth begins to be felt, these owlets have emerged.

The long days of summer, with dawn breaking soon after 3 a.m. and their rapidly growing youngsters desperately demanding ever more food, mean that the normally nocturnal Ural owls need to hunt not only at night, but at dawn and dusk as well — and even into the full light of morning — in order to satisfy their brood’s appetites.

So it’s woe-betide any rodent foolish enough to linger above ground among the leaf litter during daylight. With a long stare preceding a silent swoop, and then a sudden snatch with its razor-sharp talons, an owl will pounce before its small victim knows anything about it — then leave in one fluid motion of concentrated predation. One moment it appears to be dozing at its daytime roost, the next it is proffering food to one of its chicks.

In my local wood, at least two pairs of owls have raised young this spring. Now almost full-grown, the fluff-ball youngsters, large-eyed and yellow-billed, are to be found “parked” alone in a shady spot, or huddled together on a branch. Nearby, their parents sit, ever watchful, turning their heads slowly, peering down onto banks and into the vegetation on the forest floor ready to snatch another easy snack off the ground.

When two large crows located one of the youngsters and began bullying it, a parent owl swooped in to the attack, driving them away. It was a strange unbalanced battle. The young owl, seemingly oblivious to the efforts of its parent, merely sat there, its mottled gray plumage adrift with soft down camouflaging it against nearby trees. One black-plumed crow, loud in its cawing and stark in its appearance, swooped back and forth between the closely spaced trees seeking a way through to attack the owl chick. The much larger adult owl, broad-winged and soundless, swooped at the crow, passing between the trees somehow, as if it was a creature from another dimension and the trees were no impediment. With its deadly staring intent and fearful claws, the owl was menacing in its silence. The parent owl’s size, both in the length and breadth of its wingspan, and in its broad head and large body, dwarfed the aggressive crow.

The crows, perhaps realizing that their bullying tactics had failed, now seemed to suddenly comprehend that the tables were in danger of turning, leaving them, not as bullying predators, but as potential prey. With that apparent realization, they fled. Unperturbed, the chick sat silently through the drama of which it was the focus.

Owl chicks are ungainly at this age. They weave and bob, peering soulfully down with dark eyes deep as shaded pools. Moving their heads from side to side, they assess the distance to the next perch and launch themselves off in a flurry of beats. Their wing feathers are not yet fully grown, and as they are shorter than those of their parents they give them less lift. Also, they are not yet fully in control of their wing muscles, and while launching off from a high branch is easy enough for them, try as they might they do not yet have control of their trajectory or their landing.

One chick I watched failed to make its target perch on a branch and landed in an ungainly fashion high on the trunk of a tall tree. There, grasping the bark with its talons and fluttering its wings, it scrabbled and clawed its way upwards toward safety. They are amusing to watch at this age, and even later in the year I have been coerced into chuckles by an almost adult owl mistiming its landing — only to grab a perch with its claws but overshoot with its wings — so that it ended up hanging upside down beneath the branch. I couldn’t help but think it might have felt embarrassed to know I’d seen its near-fall from grace.

As the weeks of summer pass, the young owls will supplement the food their parents bring them with prey they learn to catch themselves, and all too soon they will find themselves alone, abandoned and needing to hunt for all of their own food. For now, though, they sit in their parents’ territory, charming casual passersby and dedicated photographers alike with their oddly humanoid stares.