On alert: A beautiful Eurasian red squirrel spotted while it was foraging in Hokkaido.

Notable memories and ones forgotten 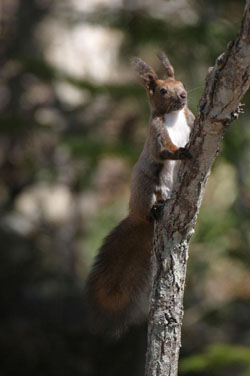 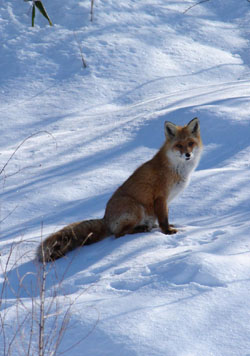 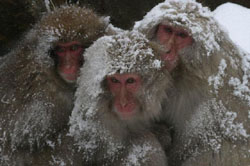 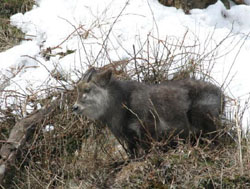 On my most recent journey overseas, to southern Brazil, a fellow traveler gave me a large Moleskine-brand notebook. Though grateful for the present, at first I was uncertain what to do with it. I generally use a particular-size pocket notebook to write up all my field observations, and this new acquisition clearly wasn’t going to fit into my pocket.

Then, almost immediately after my return from the tropics to autumnally cool Hokkaido, I paid a visit to naturalist friend Masaru Takada, who lives near Nemuro. While at his family’s minshuku guest house, I was reminded of the fickleness of our memories.

His recollection of our first meeting (and one that he has committed to magazine print), for instance, is of me arriving unexpectedly on his doorstep wearing military-style clothing. My memory is of having had a friend phone ahead and make a reservation, and of me wearing a dark-green, waxed-cotton Barbour field coat — typical outdoor wear for British naturalists in the 1980s (and garb that, after several visits to Britain, he now also favors!). But whose memory was the correct one? If only we’d had our old diaries to hand we could have resolved the disparities immediately.

Then an idea struck. For years I have been meaning to catalog and summarize my dozens of field notebooks covering my travels around Japan, and to make from them a quick-access index I can check to establish when I visited places for the first time, or last time, and what the highlights were whether two or 20 years ago.

The new notebook was not going to work for my pocket, but it would certainly work for my desk — and it is perfect for that index. Although only just begun, it is already proving a fun task, giving me an excuse to unearth and revisit my old notebooks. Day by day, as I transcribe the highlights into my new desktop dossier, memories come flooding back — and now I wish I had begun the task years ago.

Rereading my notebooks further reminds me how certain memories fade. I had completely forgotten, for example, that I used only scientific names in my early record-keeping. In the early 1980s, there were still very few books with standardized English names for species found in Japan, and it seemed easier to me back then to use the scientific tags. I had also forgotten that I used to only note down zoological and botanical information — almost always forgetting on most days in the field even to record who my companions were, or what adventures we had along the way.

Nevertheless, just those lists of species names and numbers on the yellowing pages of my oldest notebooks, along with occasional notes — in the case of birds, about their calls, songs or behaviors — now allows me to recall a surprising number of associated memories.

Some of the events have remained clear in my memory, and reading about them again simply brings them into sharper focus; but other notes refer to experiences that I no longer recall at all.

Nonetheless, there are some very surprising omissions. Could I really have traveled around Hokkaido for eight days in February 1980 and not seen any mammals?

That would be impossible for me to do now, yet my contemporaneous notebook from that first visit I made to Japan makes no mention of them at all. Nowhere, not even in a margin, is there even a pencil jotting referring to a red fox or a sika deer. Hidden among all those pages are tangential references to places I explored, people I met, whooper swans I caught and banded and others that I studied — yet there is only one brief mention of sighting mammals. That was a day I remembered full well, even without access to my notes.

Swan research (I was then a postgraduate student at Stirling University in Scotland) had taken me to the Shimokita Peninsula of northern Aomori Prefecture, and while there I had learned for the first time about the significance of the Tsugaru Channel between Honshu and Hokkaido as a species barrier.

Since then, I have learned much more about Blakiston’s Line that runs roughly southwest to northeast through this channel — it being the zoogeographical line that separates most of Japan from “the North” — but then it was all new to me.

I had heard, though, that the Shimokita Peninsula was the northernmost part of the range of two endemic Japanese mammals — the macaque and the serow, a kind of goat-antelope — and that knowledge really intrigued me. After five continuous days of counting and studying swans in Ominato Bay, tedium was beginning to affect me and I decided a change was in order.

March 6, 1980, dawned fine and sunny, so I caught an early bus at 6:19 a.m. that took me past the beautiful coastal scenery of the peninsula, with its steeply forested hillsides, narrow beaches and deep-blue sea.

From Wakinosawa, I walked on and on for several hours. I peered upward into the treetops in search of birds; I scanned the slopes in the hope of finding animals; but all I saw were flocks of gulls in each of the small harbors along the way. Having convinced myself by then that the trip was worth it for the lovely scenery alone, I had no real idea of where to go. However, knowing that both mammal species favored forest, I found a track that headed inland and followed it, plodding my way through ever-deepening snow.

Suddenly, there were some of the creatures I sought — a group of five macaques were making their way single-file across the forest floor, their long, hairy gray-brown coats blending in beautifully with the dead leaves and wintry grasses of the forest. The only brightness about them was the shine in their eyes and the pinkness of their faces in the cold air.

Further on, I found a streamside track, which I followed in the hope of finding birds, but after an hour or so I was forced to give up because of the increasing depth of snow. It was just then, though, that I got my reward — a solitary kamoshika (Japanese serow) pushing its way sluggishly up a slope through the snow.

With that, my mammal list for Japan stood at two — both of them endemic; neither, perplexingly, recorded in my field notes at the time. L ast month, I threw down to you kind readers the challenge of entering a competition to take great wildlife shots at a local park, beauty spot, or tourist trap — with a cutoff date of March 31, 2010. But this month I have another challenge: As I mine my old notebooks for information, I am on the hunt for records of my mammal sightings in Japan and elsewhere. Now, I would like to hear about your sightings — in particular if you have been whale- watching, or stayed at a lodge, inn or minshuku where mammals come to be fed or visit the garden. Do please write to me and tell me about your own Japanese mammal encounters. Again, as with the photo competition, I will come up with an honorarium-type prize, and do my best to find space on this page to publish something of the fruits of your labors.