Beauty sleep: The Siberian chipmunk stores sufficient food in autumn to last it through a prolonged hibernation. | YABUUCHI MASA

Natural strategies to cope with winter 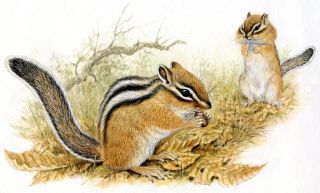 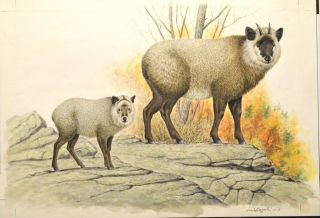 Jan. 19 is officially the coldest day of winter. Called daikan (major cold), the day coincided with some truly bitter weather in northern Japan this year. The mercury plummeted to minus 27.3 in Furano, central Hokkaido, and minus 31.3 in Esashi in the southwest, and remained cold for at least a week. Sitting indoors, I am largely oblivious to the temperature outside. I’m fortunate enough to be insulated from the cold by barriers formed by windows, walls, multiple layers of clothing and a decent heater. I feel almost subtropical in comparison to the frosty landscape outside my window.

Two days before daikan, I was enjoying the decidedly subtropical warmth of southern India, watching birds in the backwaters of Kerala going about their daily lives in temperatures that only my heater can now simulate. By the time you read this, I will be in the mountains of Nagano or in eastern Hokkaido, and dreaming of warming up in a hot spring!

It only takes me a matter of minutes to change from light summer clothing suitable for southern India into the warm layers necessary for a winter in Hokkaido. What’s more, I can change from indoor to outdoor clothes within minutes, and in fact do so several times a day as I come in and go out. The innumerable species with which we share the Japanese islands have no such easy options; instead, they use a wide variety of natural strategies to cope with divergent summer and winter temperatures.

Some species opt out of the colder parts of the year altogether, choosing only to be active during the summer. Bears are well-known winter sleepers, but I am particularly envious of the Siberian chipmunk, which dodges winter’s frozen bullet by hibernating from October to May. Think of how much you could save on winter heating bills and warm clothing!

Plants are great winter sleepers, but an enormous array of insects also have entire life cycles adjusted to the extremes of the temperate zone. They spend the cold winter months as larvae buried beneath leaf litter or hiding in soil. They get through winter as camouflaged pupae or as tiny desiccated egg capsules. They are essentially traveling in time from one congenial season to another, and skipping over the prolonged, inhospitable season in between. During that period, they hope not to be discovered by passing predators such as flocks of birds.

Like many birds, some insects avoid the ravages of winter not by time travel but by space travel. They migrate, quitting their breeding range before the harshest weather can harm them, returning after spending winter in a region with a milder climate and sufficient food. Taking a lesson from northern birds and butterflies, North American retirees (aka “snowbirds”) have adopted a similar seasonal migratory strategy, moving south from Canada and northern U.S. states to the sunbelt of the southern and southwestern United States, Mexico or the Caribbean.

While some species opt out of the tough times, other species have refined endurance as their strategy for coping. My morning walks lead me into regular encounters with these winter endurants. Like philosophers of a Stoical persuasion exercising indifference to pleasure and pain, many of our resident birds exhibit an apparent patient endurance despite the adversity that winter throws at them — biting winds, freezing temperatures or rapidly accumulating snow. More often than not, I encounter them in groups.

As temperatures drop and food becomes scarce, birds that were fiercely territorial during the breeding season now gather in flocks. They move busily through the trees, seeking out food while keeping in sight and sound of each other. In the space of a few minutes, I recognize the harsh churring notes of a Marsh tit and the soft purring trills of a party of long-tailed tits. Meanwhile, great tits and varied tits scold anything that passes overhead resembling a hawk. Soon they are joined by coal tits, showing off their tufted caps and thin sibilant calls. Gravity-defying Eurasian nuthatches scurry both up and down tree trunks and along the underside of branches as if sliding on magnetic rails. The distinctive buzzing sound of a Japanese pygmy woodpecker is always welcome, but they are more typically found on the periphery of a rapidly moving flock. I look in all the likely places for a mouse-like Eurasian treecreeper, but fail to detect one. They can often be found in mixed flocks, but this is a quiet, creeping bird that blends in so well with the fissured bark of mature trees that they are easily missed. Today, a roving band of some half-dozen species materializes quickly into existence around me, drawn together by their commonality of concerns. Ganging together, they have more eyes and ears alert to potential danger, spreading the risk of being taken by a predator and increasing the chances of locating rich pickings on the food front.

And yet they move on as quickly as I am able to identify them, driven by the urgency of life in the north at this time of year. In winter, they have no time to linger. They must find and consume sufficient food every minute of the day to ensure they carry sufficient energy to make it through to the next sunrise. To help them survive those lengthy bone-chilling nights, some species huddle together for warmth in a tree cavity or an old woodpecker nest hole.

In the United Kingdom, it’s becoming more common to leave a nest box in the garden. In fact, the British Trust for Ornithology now estimates there are now 4.7 million such vessels in the country. Birds use these artificial cavities not only for breeding in summer, but also for winter sleepovers. They can get pretty crowded, too. The northern wren is believed to hold the record for the highest number of birds sharing a nest box, with 63 of the tiny creatures jammed into a cavity. The wren is found throughout Japan, too, though nest boxes are nowhere near as common in Japan as in the United Kingdom. Nevertheless, keep an eye on any tree cavities toward dusk and you may spot a procession of small birds entering one after another, preparing to cuddle up for the night.

Whereas some species cuddle for warmth, others literally freeze — but, thankfully, not to death. Cold-blooded creatures are forced into dormancy because they cannot control their metabolism internally. Frogs and salamanders, for example, produce special sugars and alcohols that allow them to tolerate freezing temperatures — almost as if their bodies produce antifreeze. Once spring warmth returns, they thaw out and become active once more.

Smaller creatures may survive by seeking out local microclimates: beneath a leaf litter, inside a rotting log, under snow, inside our houses or even around geothermal areas. I know of one place where I can hear the calling of crickets even in the depths of a Hokkaido winter because they live in pockets of warmth near a natural hot vent.

Some species such as chipmunks avoid winter by sleeping through it in a deep torpor known as hibernation, during which they maintain their body temperature just a few degrees above that of their surroundings. Others such as field mice remain fully active — but they are hidden beneath the layer of snow that both cloaks them from the preying eyes of predators and insulates them from the worst of the low temperatures.

Larger mammals also vary in their seasonal strategies. The brown and Asiatic black beers become torpid, lowering their metabolism and sleeping the winter away in their dens. Herds of Japanese deer move away from areas with deep snow to areas where foraging on dwarf bamboo remains relatively easy. Solitary serow continue to wander slowly through their territories in areas with deep snow and they, like Japanese macaques, switch to a low-energy winter diet of bark and tightly closed buds. It is not a very nutritious diet, but it is sufficient to keep them going until spring returns with plenty.

Learning about and observing the differing strategies that species hit upon to solve similar life problems helps make natural encounters at any season — not only in winter — fascinating.