Hard landing: With their stubby wings, Rhinoceros Auklets are superb at 'flying' underwater, but crash landings back at the colony are the norm. This typically chubby individual (clearly showing the 'horn' that gives the species its name) stood stunned and staring at the author for minutes after one such return to the Akaiwa colony.

Mayhem, madness and bumps in the night 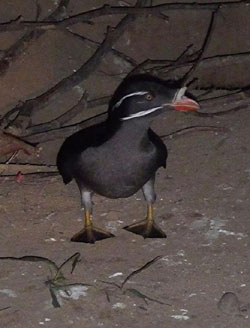 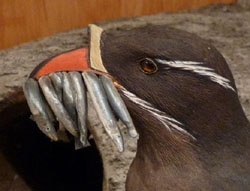 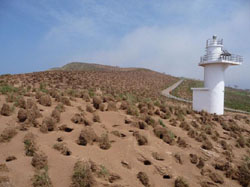 Picture this: Darkness; a strong wind blowing; fog thickening and swirling; the ceaseless crashing of waves against a rocky shore. Not a night for nature observation you may think, but think again.

My companions, Angus Macindoe and Mayumi Kanamura, and I — veterans now of many Golden Week wildlife adventures around Hokkaido — arrived at the southern cape of Teuri-jima Island, known as Akaiwa, to a scene of mayhem and madness.

Deep and ominous whirring noises approached us at speed out of the darkness; there were sinister thumping sounds; and there were, too, irregular loud crashings and crunchings.

Had there been a squealing of tires as well, we could easily have imagined a series of cars crashing off the road into the hillside.

But no, this was a puffin colony!

The erratic and irregular noises had us dodging and ducking to avoid incoming missiles with poor guidance systems. These birds may be adept at underwater “flight,” but in the air they have serious steerage issues.

Their wings whir almost to a blur to keep their chubby bodies in the air. For landing and take-off they need every square centimeter of additional lift their fully spread tails and broadly webbed feet can provide to keep them from plummeting to Earth.

The utou (as puffins are identified in Japanese) return from the sea at island height and home-in fast and low and with little control just above their headland colony. They turn upwind (if they can) to use the extra lift, but woe-betide anything (or anyone!) in their way. We experienced many near misses — as we ducked — and one glancing blow. With such poor control they simply crash land as close as they can to the area of the colony they call home.

The thumps and crashes were the sounds of them landing. No delicate touchdown for them as they alight, like a falcon homing in on a crag or a flycatcher onto a branch. Instead, utou rely on a hefty sternum, deep flight muscles and a dense feather coat to lessen their chest-first impacts. After a brief bounce, they pick themselves up, stand upright, stunned for a moment or two; then they scurry in a comical, hunched posture as they crash noisily through the dry remnants of last year’s vegetation heading for their burrows.

As we flashed a beam of light across the hillside, we saw it was dotted with dumpy dark gray-and-white standing figures — some still stunned, and some readying themselves for take-off. Between them hundreds of other birds were scuttling at speed across the ground heading for their burrows in such haste that in the darkness it was difficult not to compare them with a swarm of cockroaches or rats on a rubbish dump.

This particular utou colony, of as many as 600,000 birds, is reckoned to be the largest in the world. To wax taxonomical for a moment, I must say that I prefer to call them puffins, although most reference books give them their widely accepted English name of Rhinoceros Auklet and their scientific name of Cerorhinca monocerata. However, despite their traditional name, these birds found on the coastlines and open seas of the North Pacific recall the three other puffins (Atlantic, Horned and Tufted) in so many ways that I actually like the old alternate name of Horn-billed Puffin.

While many birds undergo distinctive changes of plumage between breeding and winter coats, puffins have a fascinating characteristic of changing their bills! Not the entire thing of course, but for breeding they develop a brightly colored outer sheath. This then falls off after breeding, leaving a smaller, duller looking bill.

However, the utou is unique in developing a horn-colored excrescence at the base of the bill that protrudes forward — you’ve guessed it — like a horn, hence its common English name. It is this horn that is shed outside the breeding season.

I have had the pleasure of sitting amid colonies of all the puffins, and the experience of being at an utou colony really differs in only one respect — utou are nocturnal visitors to their breeding grounds. With all the activity on land happening at night, that somehow adds to the excitement of witnessing this daily ritual.

Puffins are burrow nesters, and utou are no exception. The southern cape and the southern half of the western side of Teuri-jima Island provide stunning scenery to the human eye, but to a burrow-nesting seabird they offer the important additional ingredients of thick vegetation and deep soil. Here and there, as we listened on that foggy night, we could hear a rapid scrabbling sound like dozens of crazy carpenters armed with sandpaper attacking some rough wood. Occasionally in our torch beams we were able to spy the activity that was creating the noise. Plumes of fine dry soil were shooting skyward in irregular bursts and gusts, like miniature volcanoes erupting but belching bursts of sand instead of steam or ash.

The sandy dust filled the air, blown on the wind and kicked up (literally) by returning utou re-excavating their burrows. They will dig a tunnel up to two meters into the cliff-top soil, and excavate a nesting chamber at the end of that; so 300,000 pairs move an inordinate amount of dirt each year.

During our Golden Week visit, the birds were incubating, so these nocturnal puffins were simply changing over at the nest, some ready to leave soon after dusk, their mates arriving in droves from the sea where they had foraged all day.

Teuri-jima Island is off the west coast of Hokkaido about halfway between Sapporo and the northern outpost of Wakkanai, but the birds are said to feed at sea as far away as Shakotan to the southwest and beyond Cape Soya to the northeast, giving them daily one-way commuting distances of perhaps 150 to 200 km!

In a few weeks, their eggs will hatch; then the adults will return with their beaks filled with tiny fish in a frenzy of feeding visits to help their chicks survive and grow during their first weeks of life.

The seabird visitor center on Teuri-jima Island, established by conservationist and photographer Takaki Terasawa, has a wonderfully lifelike model making it possible to imagine how the birds come back to their burrows later in the breeding season laden with food. Eventually, their chicks will become large enough to be tempted out to the tunnel’s entrance, so making it quicker and easier for their parents to feed them, but also placing them at risk from the predators of the colony — the gulls, which are eager to grab a beak full of fish from the hardworking parents, or even take a chick when the opportunity arises.

The nocturnal activity at the Teuri-jima Island utou colony is amazing, but needs to be seen to be believed!