Great white-fronted geese in Hokkaido — each with different belly markings. But do they know that? | MARK BRAZIL PHOTO

Individual variations and a sense of identity 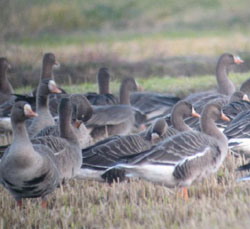 I have recently returned to Japan from five astonishing weeks in the neotropics. Exploring and observing the riches of Brazil’s Atlantic rain forest and Pantanal (the world’s biggest wetland area) has left me overwhelmed by their biodiversity.

It seemed that no matter how many times I went out into the field, even in the most familiar of areas, there were still more species to find, new faces to encounter, new aspects to understand, new sounds to ponder.

The sweltering heat and humidity, which at first seemed so intolerable, slowly seeped into my subconscious, becoming part and parcel of the overall richness of being out-of-doors. Even the daily dusting and irregular bumping of travel over dirt roads became a familiar element when visiting unfamiliar out-of-the-way places. I came to recognize a new suite of bird songs, a new range of mammal sounds, a new chorus of frogs, and even to distinguish the extremely high-pitched chittering of marmosets, which at first seemed so bird-like, from the very birds they resembled.

My first excursion out into nature back here in Japan, after returning to this temperate region, gave me a jolt. In contrast to the riches of the rain forest, I felt as if I was trying to grasp the subtleties of a textured surface in just two dimensions, or as if I was seeing a spectrum lacking two of its standard colors. I felt that something significant was missing: not merely the dense three-dimensionality and overwhelming richness of the tropical region, but the unexpected element, the daily surprises that the tropics held in store for me. In tropical regions, while species diversity is very high, generally the number of individuals of any one species encountered is low. Conversely in the temperate and higher latitudes, where biodiversity is much lower, the number of species is low, but the number of individuals of the same species is very much higher, and sometimes, at some seasons, they are crowded together. The impacts of that are felt on any nature walk. Here, one tends to bump into the same species over and over again; there, each encounter tends to be with a different species. There, I listed over 300 species of bird and more than 30 species of mammal in just over two weeks. Here, I would be hard-pressed to find so many birds in a whole year, and I would never achieve that mammal total without a great deal of small rodent and bat trapping! But more of South America another time. Right now, great seasonal changes are afoot here in Japan — changes that are not experienced by people living in the tropics.

The autumnal season of change is upon us once again. As the thermometer dips, rises and falls erratically, some days seem almost balmy, as if it is late spring or early summer. Other days contain a stronger hint of the chill to come as winter approaches. My own feelings seem to follow the erratic moods of the autumn weather. I feel restless and incomplete, yet autumn also provides me with pleasant reminders of the winter attractions ahead. Small birds, warblers and flycatchers have mostly fled south already, while buntings and thrushes are now pouring into the country from the continent. Hordes of waterfowl, ducks, geese and swans are on the move.

Just a few evenings ago, I watched and listened — entranced — as thousand upon thousand of greater white-fronted geese arrived from their feeding fields many kilometers away in wavering skeins across the darkening sky and settled in to their roosting lake with a constant chatter. What do their voices say amid that cacophony? Does each loud call carry separate meaning, like words in a language, or is this merely a simple contextual code for “I’m here. Who are you?” Back in Brazil, I listened to the chittering of marmosets keeping contact in dense forest, to the maniacal morning laughter of masked titi monkeys, to the territorial roaring of black-and-gold howler monkeys, and to the oddly horse-like calls of the northern woolly spider monkey — all sounds that seemed so obviously group orientated. Each of those species lives in small family groups, and though each species’ sounds seemed to my ear to vary rather little, up close I could see differences between the individuals in the group — variations in body size, pelage color, face patterns and so on made each individual visually unique to me, and I could imagine, therefore, to them, too. But what of those swarms of dragonflies; what of the thousands of clamoring geese; can they each see individual differences in the many others around them? What does individuality mean to them?

Like each member of a zebra herd, each with its unique flank stripes, or each ruddy turnstone with its individually uniquely banded head pattern, those greater white-fronted geese each have a bold black barring pattern across the gray-brown of their underparts. These patterns resemble a sloppily drawn bar code, but like a bar code, each is unique. If someone could devise a scanner for use in the field, and suitable recognition software, the combination might one day allow us to read those individual codes and recognize individuals and families of geese. But whereas individual monkeys in a group are able to recognize each other through visual clues, are the geese aware of their individual bar codes? Do they use them to recognize each other in any way? Or do they serve some purpose during mate selection, with females impressed by males carrying certain types of stripes? Or are they random outpourings of genetic variation writ large on each bird’s chest but with no direct meaning? After all, each and every individual macroplanktonic krill, each and every fish fry, is not only individually different at the genetic level but unique through time, even though a gulping whale can swallow them by the ton.

Does all that individuality bar-coded across the goose’s belly add up to anything? Perhaps at the flock level, when tens of thousands of geese are gathered together, staging at roosting and foraging sites during their spring and autumn migrations, those bar codes may be meaningless, each one swamped against the background “noise” of the others. Perhaps it is only as mature individuals pair off to mate that they have significance — when an individual female wishes to keep track of an individual male, when they are separating from the flock in spring and heading out into breeding territory. After all, if she can recognize her chosen mate by his bars, then she will quickly realize when an interloper has entered their territory.

Perhaps the need to ask such questions concerning the portrayal and significance of individuality in other species cannot tell us much of consequence about geese; instead, it may reveal more about our own quests for individuality and uniqueness, and our own culturally entrenched perspectives. After all, don’t we all hope to be recognized and valued, to be distinguished from the crowd as unique individuals? Instead of asking such questions, perhaps we should simply revel in our experiences within nature and marvel at the seemingly endless riches and diversity that nature presents to the curious.