Head shot: The River Dolphin's tiny eyes and forehead bulge point to the cetacean's chief means of detecting its main prey of fish: echolocation, via sensors in the bulge.

In the pink down on the Rio Negro 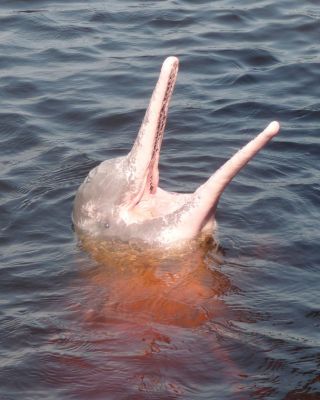 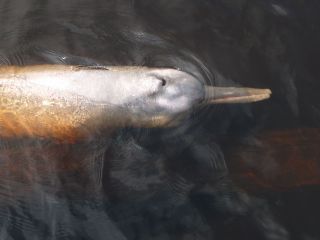 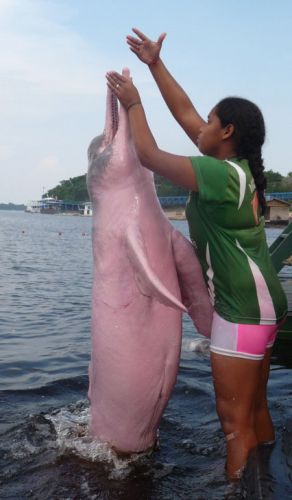 Agreat splash, sounding as if a sumo wrestler had just belly-flopped into a swimming pool, echoed up through the wooden floor of my cabin. Yes, the floor.

I was in the Brazilian Amazon and doing my best to sleep, in a cabin afloat on a lagoon-like curve in the Mamiraua River, as wildlife teemed around me and all manner of fascinating sounds kept sleep at bay.

The constant nighttime chorus of frog and insect calls was merely the backdrop to some even more extraordinary utterances.

Every few minutes, almost intolerably piercing, high-pitched sounds seemed to drill through my skull rather than enter through my ears. These, I learned by watching and waiting with a flashlight, were the echolocation sounds of Greater Fishing Bats. These flying mammals were flitting low and erratically above the water, swooping slowly with their sharp-clawed feet trailing to gaff small fish from the surface.

A strange, descending hooting “hoo-hoo-hoo-hoo” — part-mournful, part comical — was the call of a Common Potoo, a large nocturnal insect-eating bird. Many other odd sounds were impossible to identify.

Certain nocturnal splashes were no doubt those of the Arowana (or bonytongue fish) that I saw gulping air from the surface during the day, but others were so enormous as to bring to mind thoughts of giant Caiman launching themselves at human prey, or some dastardly murderer dumping a weighted body into the water.

It is difficult to sleep with such thoughts running through the old cerebral cortex and sounds like that under the floor. So, wide awake and with sleep by then furthest from my mind, I ventured outside and played the beam of my torch across the dark waters of the lagoon looking for signs of life and the source of those sumo-like splashes.

Constellations of pink rubies shone back at me. I turned off my light and the pink rubies winked out too. When I switched my torch back on those paired lights shone straight back at me once more — the eyes of countless Caiman resting calmly at the surface, just their nostrils and eyes above water.

It is difficult to describe in words how the sounds of splashes differ, but I knew from past observations that those whoppers I’d heard were not made by Caiman, whose splashings are somehow more urgent than loud, more deliberate than accidental.

It was only when daylight returned that I was able to source those alarmingly loud sounds — as I watched enormous brownish- pink creatures roll and splash at the surface.

A relative of the Arowana, the Pirarucu (Arapaima gigas) is one of the biggest freshwater fish in the world, reaching 2 to 5 meters in length, and with the largest topping 200 kg. Like their smaller relatives, they too gulp air at the surface, and in doing so they roll and turn — making an enormously resounding splash as they dive back down. That was exactly the noise that had woken me during the night.

Whether these monsters’ true color is brownish-pink I cannot absolutely attest, as I have never seen one completely out of the water. In fact, that hue is perhaps just how they appear in strong sunlight through the surface layer of tea-colored, tannin-laden water in their home rivers.

I am no great fan of the color pink, but of late I seem to have been exposed to it more than usual, first in constellations of Caiman eyes, then in the flanks of those enormous fish — and finally, in a creature that vies in size with those largest of all riverine fish: the River Dolphin.

The waters of the enormous Amazon River basin hold an astounding diversity of wildlife both above and below the waterline, among it innumerable bizarre and wonderful creatures. One such is the largest of all of the freshwater dolphins, which is known locally in South America as the Boto. In English, it has an astonishing range of names, but Pink River Dolphin and Amazon River Dolphin are perhaps the two best-known and most descriptive ones.

I have traveled to the Amazon region nearly half a dozen times, and I have heard various legends about the Boto. During each visit, hoping to see and even watch this curious creature, I have been out by boat exploring rivers, especially where their branches merge, which is apparently where the dolphins are more likely to be active.

On lucky days, I have caught glimpses of a tail fluke, the hump of a back, a dark shape in the water leaving rings of ripples as it submerged — and I’ve even heard the whoosh of one’s breath. Each time, though, I have left without a truly satisfying sighting, let alone a chance to watch them.

Even the legends suggest that Boto are more often heard, or even felt, than seen. Locals tell how at night they transform into human guise and emerge from the water under cover of darkness first to seduce then to impregnate young women living along the banks of rivers. Perhaps such tales are rooted in a social need to explain away certain pregnancies, or to reflect particular anatomical similarities between male humans and dolphins. They are, however, twinned with a certain reverence that (in the past at least) afforded the dolphins protection from hunting.

The ancestors of this extraordinary creature are believed to have entered the river systems of northern South America from the Pacific Ocean long before the Andes range rose up — and that is reckoned to be more than 10-25 million years ago.

Back then, the proto-Amazon flowed from its source in the east to its mouth in the west. As the Andes arose forming a new backbone to the continent, so the creatures of the river were cut off from the Pacific and trapped in a vast inland sea. This body of water eventually found its way out through a new delta and into the Atlantic Ocean.

During that long period of isolation, the Pink River Dolphin evolved adaptations to suit an extraordinary habitat — that of the Varzea, or seasonally flooded forests. However, quite why they are so pink remains somewhat mysterious, although explanations include them have such translucent skin that the hue of their blood shows through, or them flushing pink when excited. One thing is sure, and that is they are born gray and become pink with age.

To this day, the riverside forests of the Amazon basin emerge from the water as the dry season advances and the water level falls. Then, as the snowmelt from the Andes and the rains of the rainy season flood the river system once more, the waters reach depths that are difficult to imagine.

From a viewpoint in a boat several meters beneath the height of the river bank, for instance, I saw flood marks on tree trunks up to four or even five meters above the river bank — indicating a range of 10 or more meters during the year.

Entering into this seasonally flooded forest between the trunks of partly submerged and partly emergent trees and among the stems of submerged vegetation, the Pink River Dolphin pursues the piscine prey its long evolutionary adaptation has equipped it so well to catch.

Its powerful, paddle-like forelimbs come into their own on such hunts, with a specialized shoulder joint that allows them to be used for sculling both forward and backward. For a cetacean, this dolphin’s unusually flexible, unfused neck also allows it to twist and turn with such agility that it can penetrate between the trees and even reverse out backward if necessary.

Meanwhile, my past glimpses suggest that the “pink” of their name is perhaps appropriate — but then the same was true of my glimpses of Pirarucu.

During a visit last month to the Anavilhanas National Park on the Rio Negro, which is — with some 400 islands and more than 350,000 hectares of forest — perhaps the largest riverine archipelago in the world, I had no idea that my Pink River Dolphin luck was about change.

Yes, I knew that sighting dolphins there was possible, but I didn’t expect more than just a few more glimpses. Sure enough, the experience began with those anticipated glimpses — of both the Pink River Dolphin and its much smaller gray cousin, the Tucuxi — on quiet sections of river between the islands. But it ended with an extraordinary, up-close-and-personal opportunity to see, watch and even feel Pink River Dolphins at a point beside the Rio Negro where food is provided for them by a local mother-daughter team.

Each day, several habituated dolphins come by, their numbers and gender changing seasonally as they disappear off into the river system and the flooded forest to feed and breed. Their close proximity provides not only an astonishing wildlife encounter, but also a tremendous learning opportunity to witness these creatures in the dark waters of the Rio Negro at point-blank range.

The conservation of creatures such as these is today entirely dependent on the appropriate education of the people who share their ecosystem. I feel privileged to have been able to watch them, and to have been so close.