A fine pair: A male and a female Common Kingfisher use a log as their crow's-nest to watch for underwater prey.

In praise of 'Ice Birds' 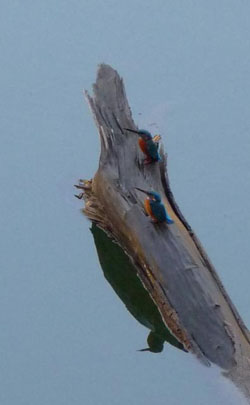 The rush, chatter and babble of a stream on a summer’s day is a great delight; the constantly shifting sounds make entrancing music and provide a wonderful source of entertainment for the wait-and-see naturalist.

In autumn, drifting foliage brings flashes of color as the water spins and carries fallen leaves far from their mother trees. In winter, ice rims stones at the water’s edge and coats the branches of riverside trees as they dip and bob in the water; ice sheets creep out steadily from the banks, groping toward the middle as the mercury dips and as periods of freezing become prolonged.

Repeated cold snaps bring a thickening to the ice that forms in layers; layers that may shatter, sounding like fine panes of glass, or crunch and thump solidly when thick enough to bear weight.

Cross-country skiing along the surface of a frozen river is a thrilling experience that inevitably leaves me with thoughts of how riverine life survives beneath this cap of ice until spring weather finally thaws the surface once more and brings the myriad colors of wildflowers to the riverside.

I have favorite river walks here in Hokkaido where I live, but last month I had opportunities to walk beside rivers in the foothills of the Himalayas in northern India. Those walks reinforced how marvelous the wildlife of fresh water is, and — as distant travels are often wont to do — they made me appreciate even more the familiar nearer to home.

Rivers in mountainous terrain, such as those I followed in Uttaranchal Province, India, are boulder-strewn, with water rushing fast, cold and white from its sources in the spring melt of snowfields, the flow varying in intensity during the day.

The rivers I grew up with in England were a far cry from those, flowing slowly, deeply, consistently, with gentle meanders through meadows where mayflies, stoneflies and dragonflies rose and danced on the breeze.

The rivers here in Hokkaido lie somewhere in-between in their character, speed and style.

In northern India, the insect life of the riversides was prolific, and hence there was a tremendous diversity of birds adapted to this particular ecological niche. Huge Blue Whistling Thrushes posed and sang powerfully in riparian trees or on the banks; delightful Plumbeous Water Redstarts bobbed and curtsied at the water’s edge; incredibly beautiful White-crowned Water Redstarts, somewhat recalling Japan’s wintering Daurian Redstarts (but much larger and with silvery-white caps), flitted from rock to rock and landed with a flourish of their tails; three species of Forktail (elegant Wagtail-like birds with pied plumage and distinctive tails) moved so quietly and inconspicuously among the boulders and pebbles that hours can be spent searching for them; Grey Wagtails walked sedately at the stream side, bobbing their long tails slowly; while dumpy, territorial Brown Dippers pelted up and down river at such high speed they seemed to blur into brown streaks as they chased away rivals from their patch.

Meanwhile, splashing and diving from perches nearby were no fewer than three species of kingfisher: the enormous Crested Kingfisher, gray and white and with an overly large head; the striking, black-and-white Pied Kingfisher distinctive in its bursts of level speed interspersed with manic hovering over the river, while constantly chattering and bickering with others of its tribe. It was the smallest however that packed in all the color — blue, turquoise, red and orange — t’was a fiery jewel of a bird, though its name, the Common Kingfisher, is rather drab.

Riverside birds here in Japan are, in contrast to those in South Asia, somewhat more limited, with just two wagtails (Grey and Japanese), one dipper (Brown) and two kingfishers (Crested and Common) adapted to habitually living in the river ecosystem.

You will note, though, that we are blessed with the very same small kingfisher as can be found in India, or even as far west as Europe for that matter. There is no need to travel far to find a true living jewel if you’re based here in Japan. That living jewel is a flashing, dashing kingfisher that goes by the name of kawasemi in Japanese. Its widespread presence along riversides in this country, and at lakes and reservoirs — even in urban parks with ponds in winter — is often overlooked because of its habit of sitting quietly and motionless on a waterside stump or bank, when despite its colors it can blend into the background.

Motionless these kawasemi are until disturbed, or until some motion in the water leads them to dash out in pursuit of prey. Then they give a hard, penetrating whistle, a short, shrill “chee” as they hurtle off following a low-level track in a blurred blaze of brilliant turquoise across the water, like a slice of blue ice.

These kingfishers have a habit of escaping, leaving merely a haunting electric-blue trace in the memory. But as creatures of habit they have favored perches, and with luck you may meet one as it flashes back to its chosen locale atop a swaying reed, or as it materializes on a weathered stump protruding from the water, bobbing its overly large head, dipping its bill and flicking its stumpy tail, sinking fractionally on its extremely short legs until seemingly frozen in the guise of the motionless hunter.

Once the bird is settled, there is time for us observers to absorb the wonderful blue barring across its crown, the patch of orange on its ears, the greenish cast to its shoulders and the details of the bill — if it is entirely black it is a male, if black with a red base then it’s a female.

Meanwhile, in quiet contemplation the kingfisher maintains its surveillance of the water, awaiting the telltale ripple from a fish below the surface. Prey sighted, it bobs its head, raising and lowering its body slightly as if to size it up. Then it’s off its perch, angling steeply down, flashing toward the water like a blue-and-orange-fletched dart. A dash, a plop, a splash, and before you know it, it’s back on its perch shaking water droplets from its orange breast feathers and thrashing its silvery prey on the branch to subdue its squirming before, with a deft flick, the tiny fish is gone, head first, and swallowed.

As winter approaches, our kingfishers descend from the higher reaches of rivers to milder zones, at which time they are more readily encountered in coastal estuaries, harbors and even along rocky shores. I have even found them sitting silently beside urban ponds in the heart of Tokyo. Their small size, and their dependence on access to small fish, makes them particularly susceptible to periods of prolonged freezing winter weather when they succumb, but with winters becoming steadily milder this is one species that may benefit from global warming and become ever more common.

This king of fishers bears the scientific name Alcedo, which derived from Alcyone in Greek, meaning “the sea-blue one,” or perhaps “a women of Athens” — perhaps in reference to its beauty. However, my favorite name for it is the German Eisvogel; it seems so appropriate to call this bird, that appears more commonly in winter and flies like an orange-and-crystal shard, the “Ice Bird.”