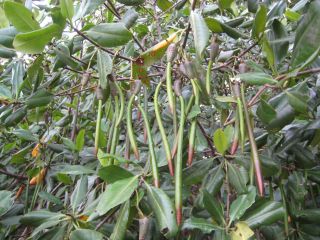 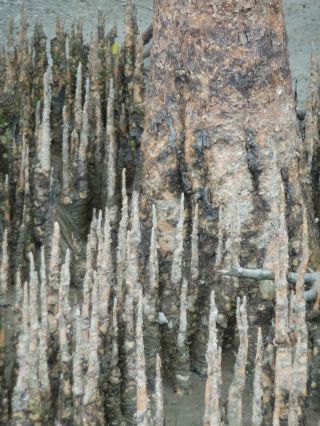 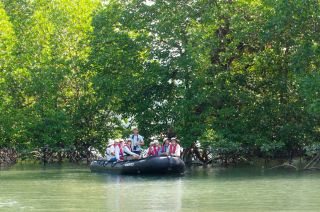 A ripple flows gently inland across an expanse of dark-gray mud. It washes in, then drains back, dampening the surface; it briefly fills, then empties from, tiny holes made by innumerable small crabs. The ebb is over, and the flow tide has begun.

The ripple returns again, and again, soon the mud is awash, water swirling as the smell of hot mud is replaced by a warm salt tang. The tide is on the rise.

Crabs that were micro-processing food from the surface of the silt retreat into their water-filled tunnels. Only mudskippers the color of the surface now skitter at the edge of the rising tide, living half in and half out of their two worlds of mud and water. The estuary is partway through its daily cycle of ceaseless restlessness.

In this estuary, a river carries silt and detritus downstream and deposits it steadily seaward, endlessly invading the marine realm from the terrestrial world in a process known as coastal accretion. The next storm may wash the accumulated silt out into the deep ocean in a matter of hours — but only for the process to recommence as if with infinite patience.

Along the flanks of the estuary an army awaits. This is a sluggish army moving only slowly seaward. No other army moves in this way, progressing inexorably, generation by generation, to take over territory newly created through accretion. This is an army that marches on stilts along the margins, holding deep into the mud, grasping at it, stabilizing it until the land can finally beat back the sea.

This army consists of mangroves. At high tide, the trees of the mangrove army stand in ranks with their roots and trunks amid swirling deep salt water; their leathery dark-green leaves shining glossily in the harsh subtropical noonday sun.

Then at low tide, these botanical amphibians stand surrounded by sand-mixed mud, their stems twist and rise drunkenly, supported on networks of snaking stilt and prop roots.

The surface of the ultra-fine mud sediment becomes slick as the tide drains away; skating here is easier than walking. Dig beneath the seemingly benign gray surface of the drying sediment and, within a few centimeters of the surface, the sucking goo is dense, black — and foul with a heavy odor of decay. This perpetually waterlogged soil holds little free oxygen and is laden with anaerobic bacteria that release, among other things, methane, nitrogen and sulfides that all contribute to that gagging stench of rottenness.

The fact that anything at all can grow in this environment is incredible. That an army of forest trees can march steadily through this muck — with temperatures as well as moisture and salinity levels swinging back and forth between extremes that would kill most species in hours — is little short of miraculous.

While most plants are excluded by these conditions, mangroves somehow thrive. Here, in this unstable, tide-washed salt-laden neo-land, they have the competitive edge over other plants. They cope with the alternate tidal wetting and drying of their roots, and as so-called halophytes, their resistance to salt concentrations (that may rise to 90 parts per 1,000) is astonishing. They may not grow massive trunks, or reach high into the sky like many other tropical or subtropical trees, but their multi-stilted roots lend them physical stability in a fine, shifting soil that would soon undermine other species — if it didn’t kill them for want of oxygen in it!

Indeed, mangroves turn the cloying silt to their advantage. Spongy tissues in their roots aid them with gaseous exchange, but more unusual and critical to them is their array of exposed breathing tubes. All plants require oxygen for respiration, including in the tissues of their underground roots. Like a swimmer relying on a snorkel stretching up from the inhospitable water into the atmosphere, mangroves access life-giving air through breathing tubes that stretch up, like grasping fingers, from the inhospitable glutinous mud. These aerial roots, known as pneumatophores, and the stiltlike prop roots are modified in such a way as to be capable of absorbing gases directly from the atmosphere and transporting oxygen to the roots buried below mud. They are so vital that a single mangrove tree may have as many as 10,000 of them bristling up 10-30 cm above the mud.

Only 54 species of trees worldwide are considered true mangroves, and each is adapted slightly differently to this saline environment with anaerobic soil. Moreover, they actually come from very varied taxonomic backgrounds, and are defined more by their ecological adaptations than by their evolutionary relationships.

Some species, termed salt-excluders, avoid taking in salt from the sea by filtering most of it out at the surface of their roots; that, combined with a degree of salt tolerance not found in most other plants, allows them to survive with 10 times more salt in their sap than most plants. Other species take in saltwater, but excrete concentrated salt from glands on their leaves in a process that still sees them tolerating salt concentrations in their sap 10 times that of the salt-excluders.

These extraordinary trees form forests where they can in saline coastal sediments and estuaries — but with an uneven distribution such that Asia alone has more than 40 percent of the world’s mangroves.

However, despite their ability to flourish in the harsh intertidal zone, mangroves are sensitive to cool temperatures, which bars them from temperate zones and restricts their colonizing to the tropics and subtropics. At their extremes, they extend north as far as southern Japan, and south as far as New Zealand’s North Island.

In many areas, though, mangroves have been cleared to make way for coastal development or shrimp ponds — or simply to be burned as fuel. It is often only then, when they are gone, that the immeasurable value of the mangrove biome as a protective “bioshield” for the coast and areas immediately inland is fully appreciated — as after the devastating 2004 Southeast Asian tsunami.

Where mangroves grow, they slow the flow of water and form a buffer between land and sea; they drain power from onshore waves and accumulate ever more silt around their roots. As they grow and march forward toward the ocean, they leave behind them drier, richer areas that other plant species can then colonize. Their extensive, above-ground roots and pneumatophores and their complex mesh of fine rootlets within the soil all serve to trap and hold sediments as they spread tideward, so helping to stabilize them and build up soils that will block tidal surges, resist erosion during high-energy tropical storms and typhoon floods, and even help to greatly abate tsunamis and reduce the damage they cause.

In addition, even when mangroves are damaged by storms they are remarkably quick to recover, while growing trees mature quickly, which further speeds the process of regrowth and recolonization.

Most mangroves are hermaphrodites, and their flowers are pollinated almost exclusively by small insects, birds and bats. Whereas most plants produce seeds that must disperse before germination in soil, the seeds of many mangrove species germinate while still attached to the tree, in a process known as vivipary.

Hence, what look like long green cigars hanging from the branches are the already-germinating fruit. These ready-to-go propagules, as they’re called, are seedlings already able to photosynthesize to produce their own food and energy supply. Once mature, they fall from the parent tree and can float far away on the sea, able to remain dormant for over a year and to survive in saltwater and resist desiccation. Eventually, the propagules may wash up onto a suitable substrate, where they lodge in the mud and take root.

Typically, though, any mangrove forest that ensues will hold as few as three or four species. Despite this, in the swamps we call mangroves, the habitat supports an immense array of other species, from barnacles, bats and birds to sponges, crabs and mudskippers. However, in the Sundarbans of Bangladesh and West Bengal, India, the world’s largest mangrove forest, located in the delta of the mighty and holy River Ganges, supports sufficient prey animals for even the Bengal Tiger, lord of the Sundarbans, to live there.

In some countries, mangroves are grown commercially for their bark as a source of tannin for dying and preserving leather, for firewood, charcoal production or for timber to make furniture or to build boats and houses. The pneumatophores even serve as fishing floats.

In addition, some plant parts are eaten and others are used medicinally for ailments ranging from toothache to fungal infections, rheumatism, dysentery and even malaria. Meanwhile mangrove forests are also widely recognized for their important role in supporting the nursery habitat of many commercial fish species.

In Japan, mangroves form an exotic landscape of almost a dozen species growing 5 to 8 meters in height. Along with coral reefs, they attract many tourists to the warmer southern parts of the archipelago.

On Ishigaki Island, Okinawa Prefecture, the Nagura Anparu mangrove forest has been a wildlife-protection area since 2003, and a designated Ramsar Site (wetland of international significance) since 2005. Though it only covers around 157 hectares at the mouth of the Nagura River, this forest it is an important home to about 60 species of crustacean, and many species of birds.

For recreational sightseeing or bird-watching, too, you’d be well rewarded for a trip to Nagura Anparu — or to the mangroves on nearby Iriomote Island or Amami Island off Kyushu in Kagoshima Prefecture.