Icy white 'blossoms' and a flourish of deep pink 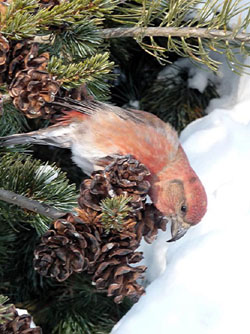 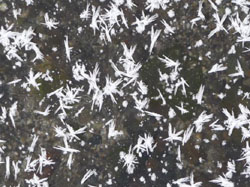 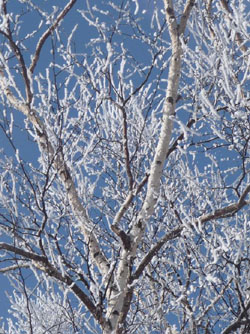 I could feel the steady ticking away of the winter season as daytime temperatures topped freezing, though the nights were still below zero. The intense whiteness of midwinter snow holds a hint of gray at this time of year, and clumps crash down suddenly from boughs above to land in the pristine carpet with a muffled “whumph.” One day I heard the drip of melting icicles, and the near-subliminal sound of water trickling down gnarled trunks.

On colder mornings, a steady “tap-tap” from above was the sound of birds hurriedly foraging: Great Spotted Woodpeckers excavating for beetle larvae; Varied Tits and Eurasian Nuthatches hammering at nuts gleaned from the canopy and carried to crack open on the anvil of a solid branch. On a warmer morning, a Marsh Tit and a nuthatch were tempted into spring song, and the snow felt slick and wet beneath my skis. Spring seemed but a breath away.

The roller-coaster ride of temperatures has continued through this winter, partly due to my repeated forays both south and north, and partly thanks to the yo-yo climatic pattern we all now experience.

In the rolling hills of southwestern Kyushu, the muted colors of a winter’s day comprise the grassy greens of bamboo groves, the deep glossy greens of camellia leaves, the dull dark greens of broadleaved evergreens and the gray-browns of leafless deciduous trees. Here and there, though, the deep red of a camellia blossom’s petals around bright-yellow stamens bursts forth in a welcome exuberance.

Meanwhile, the area’s famed tea fields are a matte, dusty green, but growing alongside them a frenzied frothy haze of white marked the opening of the plum blossoms — the first I have seen this year. There were none in Kagoshima in late January, but a fortnight later they were there like a magical coating on the delicate twigs. Mostly white, they were like a light dusting of powder snow, though some trees are festooned with deep-pink blossoms vivid enough to elicit squeals of joy from young or old alike.

In January, on the peaks of Kirishima in Kyushu, I’d witnessed a few hours’ snowfall where I’d only ever before experienced winter frosts. Generally, though, the warming temperatures in Kyushu made me comfortable out of doors in my shirt-sleeves, but the white covering on the flowering trees brought Hokkaido to mind and sent winter shivers down my spine.

Back home from Kyushu, I traded snowlike blossom for the real thing. Southeastern Hokkaido has had an unusually deep blanket of snow this winter, and it was a joy to watch elegant Red-crowned Cranes engage in their strutting, leaping courtship dances against a gorgeous, glistening backdrop. Despite the snow, temperatures have been relatively mild in the east, and ice came late to the normally completely frozen Lake Kussharo, while sea-ice made only faltering inroads into the Nemuro Strait before being blown back to Russian shores. Despite the ancient Japanese calendar considering January, February and March to be Spring (no doubt with a strong nod to the former Imperial capital in Kyoto), here in Hokkaido (which was not really part of Japan until the 1890s) the months of January and February are most definitely midwinter, with March a winter “wannabe.”

At my regular haunts in western Hokkaido, snow still continues to lie deeply now in early March. Strangely, though, in the last few days we’ve had rising temperatures and a thaw, followed by winds that reached storm strength and brought with them unseasonably warm air and unwanted rain from the south. However, thoughts of an imminent early Spring were soon nipped, like any frosted bud, by the wind shifting and bringing in heavy snow from the northwest and a return to what feels like midwinter. Gray skies, laden with flakes, are delivering layers of snow once more to a surprised landscape. If the forecast is correct, a marvelous combination of sunshine, clear skies and frosts will follow for the days ahead.

So, while blossoms adorn trees in southern and central Japan, here in the north great flakes are falling softly like drifting petals catching in every crevice, coating every surface, delivering a soft quilt of silence and serene beauty. At times wafting vertically, at times blown almost horizontally, snow piles onto twigs and branches and stacks against tree trunks to mark the wind direction in a white band down the side of each tree.

Fine fresh snow is like a blank canvas awaiting artistic inspiration, and that comes as the wind sculpts the snow and creatures venture forth when it stops falling, leaving their tracks and marks on the virgin canvas.

A dotted line of rounded paw prints, evenly spaced one after the other, marks the passage of a fox patrolling its rounds in search of prey. Four prints close together, two small, two larger, with long gaps between sets, are those of a Red Squirrel leaping its way to the next tree trunk. Larger imprints of four — two round ones almost in line, and two larger ovals side by side — indicate the nocturnal passage of a white-coated Mountain Hare, identification confirmed by signs of nibbling on twigs at snow level. From an occasional small round hole, the trail of smaller tracks was made by some kind of mouse or vole, only its hind prints showing but with a telltale tail streak between them; they end at another entrance to the creature’s subnivean world.

Color seems out of place in such a white-coated world, but this winter I seem to have encountered many wintering birds adorned brightly with red. They appear incongruous, like splashes of pink-blooming plum among all the whiteness. The brilliant red of the crane’s crown, the pink cheeks of a Eurasian Bullfinch, the red forehead of the Common Redpoll, the red tail tip of the Japanese Waxwing, the red chest of a Pallas’s Rosefinch, the paler pink body of the Long-tailed Rosefinch, and the all-over deep plum-red of the Common Crossbill; all seem heightened by the snow. These birds will depart northward very soon, and we will not see pink here for several more weeks — not until the mountain cherries finally send forth their blossoms.