One of Japan's 24 species of bumblebees feeds on a flower's nector. | PHOTO © IMAGES OF JAPAN 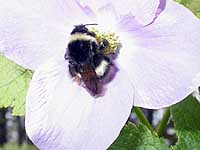 Hi-tech bumblebees leave others out in the cold

The mechanics of flight are beyond me, and I especially can’t imagine how bumblebees can become airborne. Images of a jumbo jet taking off without a runway spring to mind.

Each time I see them, bumblebees remind me of banded, animated acorns, whirring on wings that seem ridiculously small. Hardly svelte, when at rest they look more like diminutive hippos than aerial gazelles, yet following a brief expectant pause during which they literally “warm up” for flight, they transform from being lumbering and earthbound to being bumbling and airborne.

I have managed to identify 24 species in Japan, whose collective distribution covers the whole country. As a result, it’s quite possible to encounter them almost anywhere, from the lowlands to alpine zones.

Like honeybees, bumblebees do have stings, but theirs are short and barbless, so unlike honeybees they can sting and live to tell the tale. However, they will only sting when they are seriously roused or mishandled, or if their nest is threatened. In other words, if you really want to feel their wrath, then catch one and enclose it tightly in your hand — otherwise you can get up close and watch in safety.

I have been intrigued to see bumblebees whirring across the short flowery vegetation of northeast Russia’s subarctic tundra, and zooming past as I hike in the mountains of Hokkaido.

Unlike honeybees, however, bumblebees are well adapted to cooler climes, though they also range into warmer parts of the world. Interestingly, their apparently rotund shape belies the presence of the same “wasp” waist as in other hymenopterans; it is just that the petiole (or peduncle) is hidden in the dense coat.

The thick hair serves as insulation as they forage and pollinate on days too cool for other bees to fly. Their resistance to low temperatures makes them vitally important pollinators of flowering plants in colder climates, and in places such as Scotland and Scandinavia, for example, they are important fruit-crop pollinators.

Bumblebees can fly even when the air is cool; hence their ability to zoom across tundra when summer temperatures are less than 10 degrees. Nevertheless, their operational temperature is high. They cannot take off until they have warmed their flight muscles to at least 30 degrees. They do this by shivering their wing muscles while disengaging them from their wings — like revving a car engine while in neutral — to raise their muscle and thorax temperature. Then they engage all four wings and zoom off. (Deceptively, bumblebees appear to have just two wings. This is because the rear wings are small and are “zipped” to the fore wings by a row of minute hooks, so making it appear that each pair is actually a single wing.)

During cold spells, of course, bumblebees may be grounded simply because they cannot maintain the necessary flight temperature, though their hairy bodies do help to conserve warmth.

Bumblebees are marvels of adaptation. Their capacity to keep warm and fly at low temperatures is just the start of it.

Their adaptations for gathering nectar and pollen efficiently are fantastic. Their long, hairy-tipped tongues soak up nectar, and some have tongues reaching 2 cm when fully extended, so allowing them to reach deeply into flowers. Their hairy bodies serve yet another purpose, as their hairs are branched, creating a greater surface area to which pollen can stick.

But brushing against pollen isn’t their only way of gathering it. During their whirring flight, when their wings beat as many as 130 to 240 times per second, they build up an electrostatic charge. The flowers they visit are well earthed, especially the stigmas, and this means that as a bumblebee enters a flower, its charge attracts grains of pollen to its hairs — so rendering any direct physical contact unnecessary.

The reverse is true of a pollen-covered bee. As it enters a flower, the well-earthed stigma attracts the charged pollen to it, so promoting cross-pollination. The closer you look the more amazing the natural world becomes.

Recently, as I watched bumblebees quartering the cascades of early summer flowers on the slopes of Mount Ichankope, overlooking Lake Shikotsu here in Hokkaido, I was roused from my own contemplative enjoyment of the beautiful scene and of their lazy droning flight by a sudden urgent buzzing.

Watching more carefully now, I noticed a bumblebee pausing in flight before a glaucidium flower, probing it briefly then moving on quickly, as if rejecting a substandard bloom. Every now and then it seemed to find one that was more to its taste, first it probed then it settled, wandering busily over the flower for a few seconds before it gave out a rapid, seemingly agitated, high-pitched “bzzzzzzzzzzzzzz.”

There was a pattern there that I had overlooked before, and I was amazed when I searched the literature to find that it was probably “sonicating.” This is when the bee emits rapid, buzzing vibrations that apparently serve to dislodge pollen from the flower so that it will be drawn to the bee’s body hairs.

Now isn’t that a neat trick you wish you could do? I wonder if vacuum-cleaner manufacturers have ever considered fitting sonicating devices to attract dust particles?

I’ve been watching bumblebees this spring, and have noted them only visiting white, creamy or faintly mauve, purple or blue flowers. There certainly seems to be a lack of reds among the early blooms here in Hokkaido, and I have often wondered about the significance of that. I believed it to be more than mere coincidence — and again, a little research proved me right.

Bumblebees, it transpires, have three types of visual cells: ones sensitive to ultraviolet, to blue, and to green. Hence these vital cool-weather pollinators are blind to red, though they will also visit red flowers that have UV patterns on their petals; these are visible to them, but invisible to us — another of nature’s many marvels.