© Bruno Cazarini Limited viewing: The Bonin fruit bat is critically endangered, but may be seen on a night tour on Chichijima

Hanging around the threat of extinction 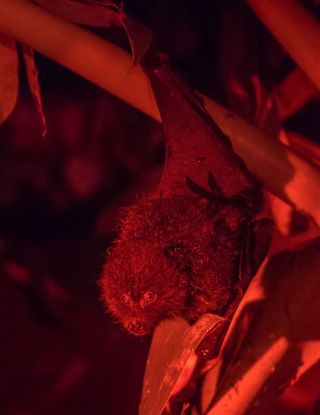 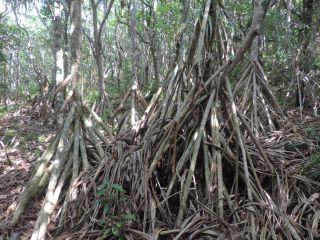 Night falls; stars are showing; yet I’m still perspiring. We set off in darkness into a night filled with hope. Our goal is to see one of the rarest creatures on Earth, a species once considered extinct, and for which even now fate hangs in the balance.

It is a bat, but not just any bat. This quest involves a large, mostly black fruit bat that as recently as the 1970s was considered extinct. This search for a fabled creature is the kind of quest that fires up my adrenalin; it is a near-impossible goal, but one with at least a sliver of a chance.

I am on Chichijima in the Ogasawara Islands, 1,000 km south of Tokyo, paying only my third visit in 30 years. Much has changed since my first, back in 1987. For one thing, night safaris are now possible. For another, my Brazilian colleague Bruno Cazarini has great camera gear!

Local knowledge always raises the chances of locating rare wildlife from “next to nil” to “in with a chance,” and we are in the capable hands of such local knowledge. We are here with a group from the Silver Explorer, an expedition cruise vessel braving the typhoon season as it sails from Hokkaido bound for the Pacific islands way south of Japan. Few of our companions on this strange quest understand just how extraordinary our goal is, or appreciate the significance of this remarkable opportunity.

Bats are not everyone’s cup of tea. Bizarre mental images abound, from those of DC Comics’ Caped Crusader to those of blood-sucking vampires of South America, yet the majority of the 1,000 or so bat species are small, even tiny, and they subsist on a diet of insects.

These Microchiroptera have the amazing ability to echolocate as they fly in near or total darkness. They emit calls, building up a sonic map of their surroundings by listening to the echoes of their own voices. Their outpouring of ultrasounds at different frequencies allows them to distinguish objects from prey and judge how far away they are from each by listening to how long it takes the sounds to bounce back. Its difficult to even imagine “seeing” surroundings with your ears.

I recall one evening walking through an orchard as a young boy and “feeling” the sounds of common pipistrelle bats as they flitted above me. The sensation was more of my brain being pierced than of hearing a sound with my ears; it was thrilling. I was tuning into the world of bats. Now, more than 40 years later, I spend many evenings each year in wilderness settings on my travels, and each year that I can still sense those chiropteran ultrasounds I count as an unexpected blessing. As we humans age we tend to lose access to those higher frequencies, and bats use so many that are well above the response of the human ear that to “feel” any of them is a bonus.

Bats are a bonus in many other ways, too, not least because they are major predators of insect populations that might otherwise be overwhelming, but also because certain bats are important pollinators of a wide range of plants, especially in tropical and desert environments.

In addition to those insect-consuming Microchiropterans, there is another group, the Megachiroptera, or megabats. Larger in size, they are smaller in number, with about 180 species, all confined to the Old World. These Megachiroptera have lost the power to echolocate, and have large eyes and long snouts earning them the sobriquet “flying fox.” See one up close and why they have been so dubbed becomes obvious: Their long fur, and facial features well deserve the foxy epithet.

Like other bats their flight is a marvel. Long bony digits spread a soft wing skin so broadly that they are capable of sustained flight. In their airborne capacity they are like birds, yet little about their anatomy resembles that group. These are mammals, armed with teeth, fur and the capacity to lactate, but unlike the microbats they have charisma on their side, and in the case of the Bonin fruit bat, or Bonin flying fox, they also have rarity value.

Known here as Ogasawara Okomori, the species was first described to science as Pteropus pselaphon back in 1829, when the islands were first being explored. Long isolated on this remote subtropical archipelago, the species not only has an incredibly restricted range, limited only to Chichijima, Hahajima, Kita Iwojima, Iwojima and Minami Iwojima, but is also classified as “critically endangered.”

This forest-dwelling bat has a range of less than 100 sq. km, and it is threatened by continuing habitat degradation and loss. The current population is estimated at fewer than 300 individuals, and if one could gather them all together the entire world population of this unique species could probably hang from the ceiling of one eight-tatami-mat room with space left over for them to move around. Setting off into the darkness to look for one seemed worse than looking for the proverbial needle in a haystack.

Considered extinct during the 1970s, this species was rediscovered in 1986. When I first visited the islands in 1987 I had no hope at all of seeing one. By March 2006 it was estimated that perhaps as many as 150 were on Chichijima, but even that made for a tiny target and my hopes were not high.

Aptly named, fruit bats depend on plants, eating pollen, nectar and fruit; the Bonin fruit bat is no exception. The first hint from our local guide was, “Let’s visit some of their favorite fruiting plants.” One of these is an endemic plant known as Pandanus boninensis and colloquially known as tako-no-ki (octopus plant, named for its growth habit). The bats are an important seed and pollen dispersal agent for this and other native plants.

Amazing! We were in luck. Not one but perhaps four or five were foraging and flying silently across the night sky. The adrenalin rush subsided into a warm glow of appreciation — for seeing them, and for their survival.

As snow flurries already sweep across Hokkaido where I live between travels, it is hard to think that it was just a month ago that I was sweltering on Chichijima. But as the cold continues to bite, bringing snow to northern Japan in the weeks ahead, it’s the perfect time to plan a warm winter getaway; and where better than the remote Ogasawara Islands.

Ferries run from Tokyo, and once on the islands a night safari is a wonderful option. Contact the Ogasawara Village Tourist Association for more information (www.ogasawaramura.com/en); a three-hour night safari with chances of bats, glow-in-the-dark mushrooms (known locally as “green pepe”), and wonderful star-gazing, can all be had for less than ¥4,000.

There are many local guide options, but one place to start would be Ogasawara Kaiun (www.ogasawarakaiun.co.jp/english/guide/tour_night.html) You’ll have a great adventure, though you won’t have the benefit of Bruno Cazarini along to take amazing photographs for you!

Winter is by far the best time to visit, because the fruit bats gather at special communal roosting sites, making them much easier to locate than in summer, when they are widely dispersed. Radio-tracking research by Norimasa Sugita and his colleagues at Rikkyo University, Tokyo, has shown that whereas those summer roosts are used by solitary bats or nursing females, in winter, as temperatures fall, the bats gather to thermoregulate at night and as many as 100 will gather at a single roost.

These roosting clusters are of three types: mixed groups of subadult males and females, all-male groups and groups mainly of females with just a few (lucky) males. It is in this last type of winter roost that all the mating action takes place, and the males there will fight to exclude other males.

Scientists have come up with a great technical term for this behavior: female-defense polygyny. But regardless of the terminology it’s an amazing behavior — and one that is quite incredible to witness.