Simply sylvan: My local wood in Nopporo, Hokkaido, in its fresh-green spring glory.

Green is good for you — and the Earth 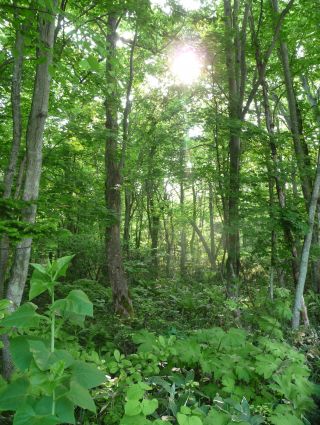 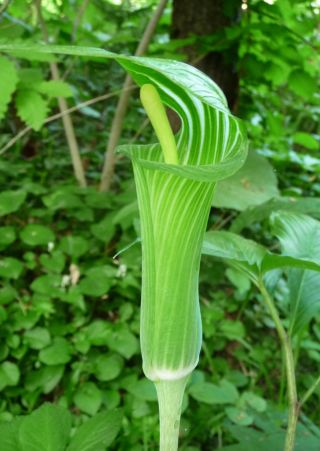 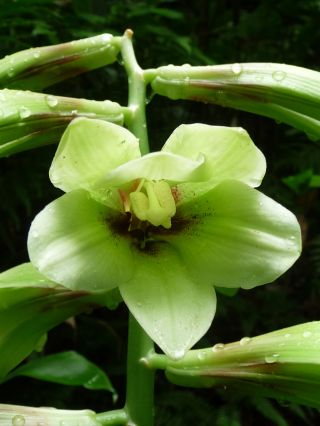 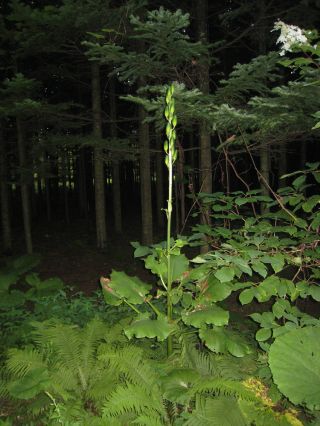 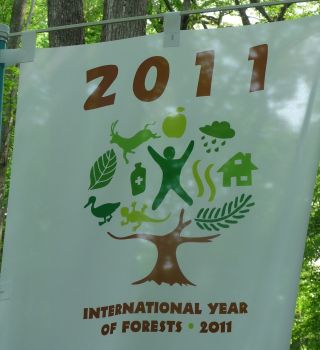 My work often takes me away from my home in Hokkaido, and with every absence I am irked to be missing out on some part of the inexorable seasonal advance. So, each time I return I make a beeline for my local forest to reacquaint myself with the resident and migrant birds, to trace the tracks and signs of the mammals and to admire the rapidly shifting kaleidoscope of colors in the flowers and leaves.

I mix frequent visits to the same trails in the same lowland forest at Nopporo, so as to satisfy my need to be familiar with a particular “patch,” with hikes on a range of mountains to different elevations, so as to entertain my desire to be surprised, and to meet with the unexpected.

Surprise and excitement come in turning a corner and finding … a vixen (a female Red Fox) marshaling three unruly cubs as they gambol and play oblivious to my presence … a blue-black Siberian Thrush in full throat, its silver-white eyebrows lending a splash of distinctive style to this simple songster.

In contrast, familiarity comes through watching, week after week, for ongoing processes such as the glossy-leaved stems of Heartleaf lilies (Cardiocrinum cordatum) slowly inching their way skyward. Straight and tall, they eventually break buds near the tops of their stems, a meter or more above the ground, that are elongated vertically like stubby green fingers. It may take them 10 years to reach this flowering stage after early each year producing rosettes of large glossy leaves, then growing a little taller, and all the while storing energy underground in a bulb in readiness for a stronger burst of growth the following year.

Eventually they will reach their full size of up to 1.8 meters, with five or six creamy flower trumpets crowning their stems to attract pollinating insects — among which I take particular delight in seeing enormous swallowtail butterflies visiting them.

Once past the flowering stage in its life cycle, the lily’s final blooms wither and the stems turn brown as they dry out with seedpods atop them. Then the pods slowly dry and split down the sides to reveal stacks of winged seeds that are shaken up and out as the stem rattles and vibrates in winter winds.

As I watch the tissue-thin membranes lifting the tiny seeds off into the air, and as they blow through the forest or skitter out of control across the frozen surface of the snow in winter, they take me back in time, reminding me of the warmth of summer and the colorful butterflies that flew almost as lightly through the forest in that season.

In spring, when only a few trees are in blossom and none are in leaf, the forest seems an expansive, open place, with long vistas between the tree trunks and clear views to the sky. Then as summer approaches, it begins to feel enclosed as the ground-covering plants grow taller and the canopy begins to close so the views contract. As summer settles in, and the canopy is completed, the forest seems so intensely three-dimensional that locating anything other than the tree immediately ahead seems difficult.

At this season, dawn is the best time to enjoy the chorus of songbirds at its best, for within a few hours the cicadas stir as the temperature rises and burst into their frenzied buzzing, sawing, ratcheting, drilling and boiling noises that drown out all else. Their sounds will ultimately fail, and the dry rustling of their wings will be replaced by the rustling of autumnal leaves as the forest prepares again for winter.

In my native Britain I support the Woodland Trust (www.woodlandtrust.org.uk) and wish there was a similar national organization here engaged in buying, planting and nurturing native woodland — though of course my fellow Nature page monthly columnist, C.W. Nicol, has been doing just that for decades in Kurohime, Nagano Prefecture, where the C.W. Nicol Afan Woodland Trust now oversees nearly 30 hectares of marvelously healthy and increasingly biodiverse mixed forest.

Britain, however, is one of the least sylvan countries by area in Europe, with only 4 percent native woodland cover, so the Woodland Trust exists to improve this situation. Its explanation of why woods matter gives pause for thought:

“Woods, and the trees that make up a vital component of them, are essential to life. They have a myriad different benefits for both wildlife and people. They stabilise the soil, generate oxygen, store carbon, play host to a spectacular variety of wildlife, provide us with raw materials and shelter, and inspire our imaginations and our creativity. The almost magical, mystical quality of woods makes them a great place for relaxation and recreation. A walk in the woods can give anyone a feeling of peace and tranquillity. A world without trees and woods would be barren and bare.”

Those are all sentiments I share, and though the reality in Japan is very different, there is still so much that could be done.

That reality includes the fact that some 70 percent of its roughly 127 million people live on around 3 percent of the land area. Hence there are very high population densities in some areas, but much of the country remains only sparsely populated. And it’s trees that cover most of such areas, since Japan has an enviable 68.2 percent forest cover amounting to some 24,868,000 hecrares, of which primary forest cover had increased to 4,591,000 hectares by 2005 while plantations stayed at around 10,321,000 hectares (the remaining forest counts as secondary forest).

Despite this superabundance of trees, though, many urban and suburban areas of the country are miserably lacking in green, and with urban summer temperatures on the rise, more greenery and the shade it brings would be very welcome whether as parks, street trees, or as peripheral woodlands — community woodlands in which urbanites could readily relax.

I count myself very fortunate to live in Hokkaido, which is the most forested region in Japan, with more than half the island covered with natural vegetation. Shikoku, too, has a high proportion of forest cover, which contrasts markedly with neighboring Kyushu, which has the highest percentage of land under crop cultivation, and Honshu, which carries along its Pacific and Seto Inland Sea coasts the greatest burden of population.

So, since Britain needs more overall forest cover, planting trees is seen there as an important opportunity to mitigate the effects of some greenhouse gas emissions by utilizing trees to absorb carbon dioxide from the atmosphere and lock it away for decades or even centuries. In Japan, however, the need is not for more forest overall, but for better management of existing forests — and for more trees, woods and forests around and within settled areas to help provide shade and recreational areas to alleviate urban stress and rising temperatures.

As I entered my local forest yesterday, I noticed a fluttering banner flag near the entrance that read: “International Year of Forests 2011.” The simple logo cleverly celebrates the theme of this U.N.-designated year, which is that people are central in the sustainable management, conservation and development of our forests, since the elements of its design show how forests not only provide shelter for people and habitat for biodiversity, but are also sources of foods and medicines and help provide clean water; furthermore they play a vital role in maintaining a stable global climate and environment.

Taking these iconic elements together, the potent message is that forests are vital to the survival and well-being of life on Earth, including for all 7 billion of us humans. It’s these topics and more that will be covered at Japan’s U.N. International Year of Forests Conference being held at the C.W. Nicol Afan Woodland Trust Centre in Kurohime on Aug. 3.

And indeed, the the World Bank has estimated that some 22 percent of the world’s people depend on forests for their livelihoods, with some 300 million actually living in them, while it estimates that the annual international trade in forest products is worth $327 billion.

Nevertheless, U.N. data shows that every year we are losing some 130,000 km2 of forests (roughly the size of Greece) to deforestation — accounting for as much as 20 percent of the greenhouse gas emissions that are a major factor in global warming.

All in all, considering the enormous significance of forest habitats for biodiversity, and as stores of carbon on such a great scale it’s difficult to comprehend, it is easy to comprehend that by protecting them — and better still by restoring forests where they have been lost — we can help to support biodiversity, cut greenhouse gas emissions, and help sustain livelihoods and living environments.

Given the enormity of those values and considerations, it seems almost flippant to bring the matter down to a personal level. However, I can think of no better therapy than to head for the woods — and for anyone who has spent too long at a desk or indoors, I heartily recommend a stroll, a walk or even a hike in a wood or forest.

Green therapy is an expanding branch of medicine, regarded as being particularly helpful for those suffering stress or depression, but exposure to the out-of-doors is generally therapeutic even for those not apparently ailing in such ways. While benefiting from the exercise that a good woodland walk brings, it is also an opportunity to reflect on the value of forests, our relationship with them, our own uses of them — and how we can better support them.