Gone are the geysers of Kamchatka 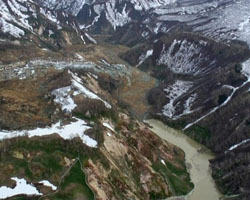 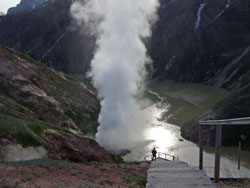 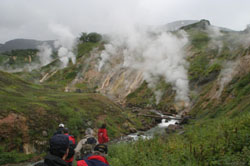 A WONDER WIPED OUT

If a trip to the Valley of the Geysers on the Kamchatka Peninsula of Siberia had been figuring among your long-term travel plans, then I have sad news to impart.

Just as I had finished my column that was intended to occupy this space, I received the extraordinary news that the entire beautiful and awe-inspiring site in the wilds of that 1,200-km-long peninsula between the Sea of Okhotsk and the Bering Sea had been obliterated.

Lying far to the frigid northeast of Hokkaido, the valley was one of a quartet of extremely active areas worldwide where geysers of superheated water gush from the Earth’s surface — the others being Iceland, home of the “original” geysir (the name of the place where they occur), Yellowstone National Park in the United States and Rotorua in North Island, New Zealand. Of the four, it was not the largest, nor the most spectacular, but in its extreme remoteness it was, in my opinion, the most wonderful.

Yet this astonishing place — one of the great natural wonders of the world, created by forces of nature over uncountable millennia — was obliterated within a matter of hours on June 3. It seems that an earthquake, in this seismically violent region where quakes and eruptions are part of normal life, triggered the collapse of one side of a snow-covered mountain. This sent a stupendous slide of boulders, gravel, snow and ice into the narrow valley for more than a kilometer downstream of the geysers. This mass choked off the river flowing through the valley, which then rose and flooded everything.

The news came at an inopportune moment for me, as I was just preparing for a return to Kamchatka in mid-June — including a return to the valley.

This site was only discovered and made known to the outside world 66 years ago, in April 1941, when Tatyana Ivanovna Ustinova, a hydrologist working for Kronotsky Nature Preserve, and her local Itelmen guide Ansifor Krupenin, were exploring the valley of the Shumnaya River. As they rested on a steep, snow-covered bank, a jet of hot water suddenly sprayed into the air from across the river.

That first known geyser in Kamchatka, which Ustinova named Pervenets (meaning “first-born”), marked the entrance to a river tributary, which Ustinova explored later in the summer of 1941. She named the river the Geysernaya, and there she was astounded to find many jets of water gushing from the ground.

Her find was to become a key feature in the Volcanoes of Kamchatka UNESCO World Heritage Site, and one of the major attractions for nature tourists to the Kamchatkan region.

Geysers are a rare type of thermal spring, dependent on a magma source several kilometers beneath the surface heating rocks and the water they contain and forcing that water toward the surface where it breaks out in boiling pots, steamy sulphuroles (like those near Kawayu in eastern Hokkaido), bubbling mud pots (as at Beppu in Kyushu) — or in fully-fledged geysers as in Iceland, Yellowstone, Rotorua and that Kamchatkan valley.

Because of the pressure at depth, 1 km below the surface water boils at 300 C. As pressure builds up underground, the water rises and fills the gryphon (the surface pool or pot of the geyser), bubbles of super-heated steam accumulate below the columnar channel leading to the surface and eventually can act like a plunger pushing up from beneath the column of water. Depending on the pressure, the height and diameter of the column of water, the geyser that bursts upward as a gout of water shooting into the air can last for several minutes or even hours.

Then, having evacuated the buildup of water and released its pressure, the remaining water at the surface boils and bubbles, while cooler water flowing into the channel lowers the temperature and returns the geyser to its resting phase.

After a given period the whole process repeats itself, upward and out of the earth.

But it was not just the geysers that made the Kamchatkan site so interesting, for it was peppered with dozens of thermal springs in a kaleidoscope of colors, deep steaming vents — likened to the gates of hell — belching mud pots, multihued clays and gently contoured terraces of geyserite over which were deposits of thin carpets of thermophilic (heat-loving) algae.

Meanwhile, the mountains surrounding the valley are covered with stone pines, alders and rowans, while on the valley’s flanks woodlands of Erman’s birch are home to Arctic warblers and Oriental greenfinches. Bears roam this valley as they do much of Kamchatka, and once I found fresh prints in mud close to one of the geysers; it seems even the bears came to watch the gushing waters.

My first sight of the valley, as for most visitors to the site, was through the window of a helicopter. Laid out below me was a complex landscape of forested mountain slopes, narrow valley flanks with meadows of herbs and wildflowers through which wound rivers and streams, and from which rose innumerable wisps, clouds and vents of steam. On a colder day the steam was thick and cloudlike, on a warmer day it was more ephemeral, lingering less in the warmer, drier air, dissipating quickly on any breeze.

Once the brain-numbing roar of the helicopter had ceased pounding in my ears, the pervasive sense was of silence. But then the lovely gushing sound of the rivers became audible and, descending into the valley on a wooden boardwalk, the sounds of birds began to rise over the rushing and gushing of stream and steam.

I recall that the colorful wildflowers were delightful, but that the colors of the muds and clays, minerals and algae were even more arresting — some mud pools were as bright crimson as blood, others of the deepest blue.

The ceaseless activity of the steam springs and mud pools was mesmerizing, the smells and sounds adding to the atmosphere of primeval nature. Nonetheless, mere human patience was tested by the desire to catch one of the geysers in action. It was most definitely one of the great natural wonders of the world to behold.

Themselves created by powerful forces deep within the Earth, the mountains and the valley still remain, but the debris now blocking the lower valley and the flooding spreading back upstream from this natural dam have transformed it into a very different place. Fortunately, none of those working at or visiting the site on the Sunday that the natural disaster occurred were hurt. Had the slide taken a different direction, though, the ranger’s house, the staff and all the visitors might so easily have been obliterated — like the valley.

Once more, however, the forces of nature and time will be at work, slowly shifting and shaking the area with more earthquakes. Perhaps in a future tremor the natural dam will burst and, breaking free, allow the lower valley and its volcanic vents to reshape themselves. Or perhaps pent-up forces beneath the valley will seek another outlet, and create yet another landscape feature. Only time will tell — though it seems unlikely to happen in my lifetime.