On display: A female brown booby shows off its tapered profile and sleek plumage. A leisurely flyer when on the level, the bird

Gazing in awe on nature’s flying bullet, the brown booby 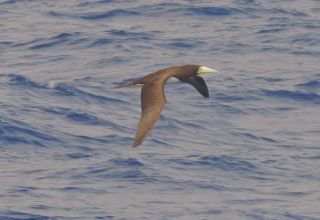 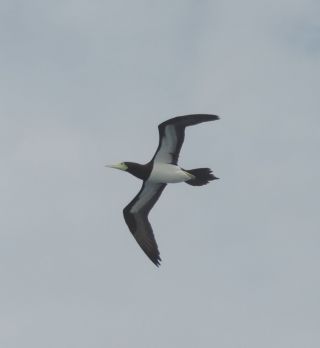 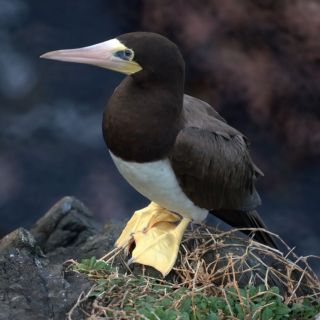 “Sleekly elegant” is a befitting way to describe a catwalk model in the fashion world, suitable even for an ultramodern city tower or a bullet train, and appropriate on the race circuit for describing a pleasingly aerodynamic two-seater convertible. It is a surprisingly relevant way too for describing certain birds — the brown booby, for example, the large seabird that effortlessly kept pace with the 490-ton ferry Hahajima Maru as it plied its way from Chichijima to Hahajima in the Ogasawara Islands south of Tokyo.

Most birds convey a clear impression of being feathered; there is something distinctly, well, feathery about them. Feathers are, after all, the single defining characteristic of all surviving “dinosaurs,” the living members that belong to Class Aves. Most birds make no attempt to hide the fact that they are clearly wearing a feather coat.

Some bird species, though, seem, in their extraordinary elegance, to go beyond the norm. For them their plumage appears more like plush velvet; their outer covering is so finely smoothed as to appear more like one continuous surface, as of a model’s fine fabric jumpsuit, or a base-jumper’s wingsuit, than the isolated tips of countless thousands of tiny, overlapping contour feathers growing from follicles in the skin. The supremely aquatic divers or loons, the seemingly silken waxwings, and, among the seabirds, the sleekly elegant boobies, are clearly in this elevated category of avians.

Mesmerized by the brown booby just out of reach, I watched as it banked and rose, slowly lifting on the sea breeze like an elongated leaf blade carried aloft. I took in its long, smoothly tapering bill, which was pale yellow like old ivory. I admired the patches of delicate pale periwinkle-blue bare skin around the base of its bill and enclosing the large dark eyes. I was struck by these deep brown eyes as they are unusual among birds (other than among predators), in being placed so far forward as to provide binocular vision. Most birds have eyes located on the sides of their head, giving them excellent all-round sight, but little binocular vision. Not so the extraordinary, and predatory, boobies.

I approved of the bird’s plush, skin-like brown plumage — the upper surfaces of its wings, its head, breast and tail, all of which appeared somewhere on a scale between strong coffee and chocolate brown. Taking in the rest of the bird’s appearance, I appreciated how the subtropical sunlight reflected back by the sea’s surface rendered the plumage beneath its wings and on the underside of its body as of the purest white.

A mere brief stretch of its wings and it was banking away; a twist of its long wedge-shaped tail brought it sailing back again, this time with a companion. The second bird seemed identical until I noticed that its face was a delicate shade of pale sulfur yellow — the clear markings of a female. The two birds may have been just coincidentally flying in the vicinity or may have been a mated pair, as the first blue-faced bird was a male. Eventually more boobies joined them, riding the updraft created in the vessel’s passing.

The effortless way in which the boobies appeared to pace the ship masked the fact that this is a bird capable of considerable speed. Although typically cruising well within any Japanese 40 kph urban speed limit (males average 27 kph and females 34 kph), the brown booby is easily capable of flaunting rural speed laws as it accelerates to over 90 kph. The booby’s sleek and velvety profile serves a double purpose, for not only is it aerodynamically adapted for speed in the air, but it is also aquadynamically adapted for swiftly penetrating the surface waters of the ocean.

The tropical boobies, and their relatives the temperate gannets, are spectacular divers, not because of the depths they reach — they are easily outpaced in that regard by auks and penguins — but because of their methods. At home in the air they bank and glide, soar and sweep above the ocean usually at a height of 10 to 12 meters, until their acute binocular vision allows them to spot and pinpoint prey beneath the sea’s surface. Their leisurely horizontal flight then changes dramatically. Suddenly they are all focus, their attention refined and honed to the point that is their prey beneath the waves. Their elongated and pointed wings, until now beating steadily in a horizontal plane, promptly swivel. The birds tip their bill points downward; then, with a few high-powered beats of their meter and a half wingspan, they surge vertically toward the sea.

A few meters above the ocean’s surface they change posture once more. They slide their outstretched wings backward so that they touch and are in line with their bodies. Now they are the avian equivalent of a swing-wing fighter-jet aircraft — long, slender, deadly darts. At speeds that would send a Japanese road-speed patrol on one of their regular “safety drive” campaigns into ecstasy, the boobies hit the water like powerful missiles, sending spouts of water up vertically as they disappear beneath the waves.

The pantropical brown booby occurs around oceanic islands in the Atlantic, Indian and Pacific oceans, favoring coral atolls and volcanic islands, where the birds nest on open slopes or ridge tops. There, males and females share the teamwork involved in raising their clutch of two eggs a year, taking more than 40 days to hatch them and needing another three to four months for fledging their young. During this long breeding period the adults range out from their nesting grounds in search of prey that includes all manner of small fish up to 40 cm in length, particularly various species of flying fish.

When they spot prey that is close to the surface, they dive at a gentle angle, entering the water smoothly and as easily as a sharpened razor slicing into flesh. They leave barely a ripple and bob back to the surface quickly, having only submerged a meter or so. If their prey are schooling more deeply, then their plunge-dive will end vertically in a spectacular sword-like thrust into the sea, reaching speeds of over 90 kph and sending bursts of spray flying high into the air. They dive to several meters and may even pursue their prey beneath the waves, propelled underwater using their beating wings and kicking feet. Eventually they emerge, and if fortunate will have prey to carry back to their nest mate or chicks.

Once their December to March breeding season is over they don’t so much migrate as disperse away from their breeding grounds, and then may appear well beyond their normal breeding range. They are often to be seen around the Izu Islands that stretch south and east from the Izu Peninsula of Honshu, and I have seen them many times off the coasts of Kyushu. To see them easily, though, pay a visit to the Ogasawara Islands early in the year — a treat is in store for you there.