Feathered friends of the forest 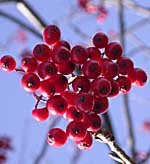 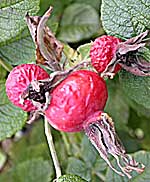 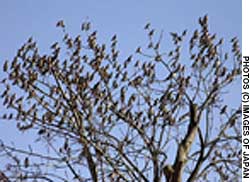 In a passive way, plants have got birds sussed. They use them, abuse them (ever seen a thrush drunk on fermenting apples?) and mess with their digestive systems. Birds are willing pawns, though; brightly colored flowers and gaudy berries send a simple signal to the bird brain that shouts — energy!

The close and complex relationship between the berry-bearing mistletoes and birds such as waxwings (mentioned in my Nature page columns of Mar. 20 and April 3) is one of the best-known examples of plant-bird cooperation. The plant produces seeds wrapped in a rich source of energy, and the birds — tempted by the packaging — carry off the parcel and deliver the contents to another site where the seeds may germinate. In this way the bird is induced to perform the valuable service of seed-dispersal for the plant, and so help it to regenerate and travel.

In the temperate region of the northern hemisphere, we generally associate berry-bearing with autumn. In reality, however, some plants produce berries from as early as April, while others do not do so until November and December, so that there is a prolonged period during which the forest provides fruit of some sort.

Nevertheless, there is a hiatus; berries are few and far between in these parts during mid-winter and late winter. That gap in the food supply makes it impossible for small mammals or birds to become dependent on a berry-eating lifestyle, and forces them to seek out other kinds of food at those times.

Others struggle in summer. The northerly breeding waxwings, for example, that we tend to think of as exclusively fruit-eaters, become largely insectivorous during the breeding season.

In tropical regions, by contrast, seasonality is less marked, and different trees and shrubs flower and fruit in different cycles, with the result that some fruits are always available. Here we find frugivory (a dietary dependence on fruit) at its extreme, with some birds eating nothing at all but fruit.

However, in both tropical and temperate regions, it is impossible to underestimate the significance of birds to plants.

Birds don’t just move around locally, some travel great distances, and so their potential as plant dispersers is enormous. Researchers on the remote Galapagos Islands, nearly 1,000 km west of the coast of Ecuador, have estimated that 59 percent of the plants there were carried by birds (compared with just 32 percent by the wind and 9 percent by water).

Recent research in Japan has found that in a 4-hectare primary warm-temperate, evergreen, broad-leaved forest (known as a lucidophyllous forest) in Miyazaki Prefecture, 111 plant species were identified as bird-dispersed, and 15 common bird species were found to be frugivorous to some extent or other.

In lucidophyllous forest (the most common form in southwest Japan), more than 60 percent of the woody plant species produce fruits that are eaten and dispersed by birds, indicating how important bird frugivory is for their regeneration. With the dramatic loss and fragmentation of such forests in Japan in recent decades, scientists are concerned lest the fruit-bird interactions so crucial for forest maintenance break down.

Endozoochorous plants, those depending on frugivores to disperse their seeds, compete for the services of up to 15 species of common frugivores as messengers. But some birds only feed in certain layers of the forest, either the canopy or the shrub layer; some only eat fruit occasionally or in small quantities; while some feed on fruit regularly as a major part of their diet. Some of Japan’s common forest frugivores occur throughout the year; others are seasonal visitors, such as the narcissus flycatchers of summer and autumn; some just stop over on migration, such as the eye-browed thrush; or only in winter, such as the dusky thrush.

Research has shown that around 60 percent of the endozoochorous plants in Japan produce small fruits, a fact that makes sense because these can be eaten by both large and small birds, whereas only large birds can eat large fruits.

There is a final irony. Not all birds, it turns out, are willing to submit to botanical exploitation. The copper pheasant, for example, takes a wide range of fruits, but its powerful gut doesn’t allow seeds to pass through to be dispersed; instead it digests fruits and their seeds. The Japanese grosbeak, similarly, renders seeds useless for propagation by using its powerful beak to mash them to edible pulp — so joining the pheasant in the ranks of seed predators, not seed dispersers.