Dwarf bamboo's no pushover whatever the season 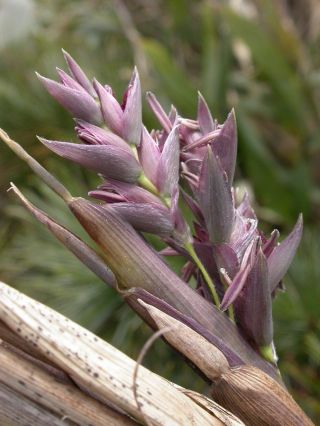 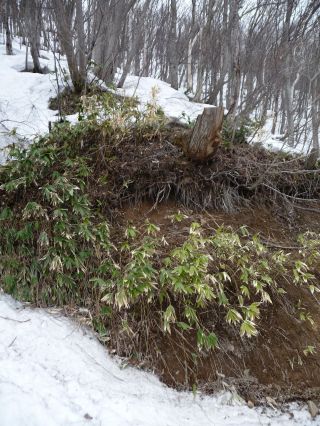 An unseasonably cold spring wind blasts in from the north shaking all before it. Oak trunks tremble; mast-like young white birches sway alarmingly and ineffectively rattle their branches at it. Buildings even shudder at the wind’s assault. Slender, elegant bamboos sway, bow and bend, as if wave-washed by the same invisible force. The sound of their leaves is an all-enveloping rustling, like wind made visual, and their vibrant stems move as if reveling in the fury of it. They seem like whirling dancers caught up in the vigor of festive music.

Like a field of ripening rice facing the lashing of a typhoon wind dragging drubbing rain behind it, dwarf bamboo (sasa) is felled and flattened by the wind’s force. But unlike rice, resilient sasa stems are wiry and not prone to permanent wind damage — indeed, as the wind’s bluster dissipates, they spring back to attention.

Cane-strong and whip-supple, dwarf bamboo stems respond to snow much as they do to wind: They bow before it, lying down meekly, awaiting its passing. Winter’s first falls of snow sprinkle the forest understory clothed in dwarf bamboo with a weighty whiteness. Snow forces their narrow stems to tip; they bow their heads. Snow turns broad sasa leaves from green to white, and hiking along trails among them and constantly brushing against snow-covered leaves I am soon wet to the skin and trails soon become impassable.

Then early winter’s repeated blanketing brings an accumulation of snow that bows the sasa stems down. Like a squeezed sponge flattened from three dimensions into two, once vertical stems become horizontal. By midwinter, a crushing weight of snow buries them deep, flattening them to a carpet.

Birch, alder and oak saplings may be crushed, their young trunks irreparably damaged. Older, stouter trees may suffer catastrophic damage to their trunks and limbs from the same weight of snow, but sasa takes a protracted, slow crushing easily in its stride.

Here and there, owing to the vagaries of the wind or the fine powderiness of the snow, sasa stems remain vertical, their leaves protruding above the white-blanketed surface all winter long. Their prolonged exposure to subzero temperatures and fearsome winds bleaches them to a delicate pale tawny gold, yet where they remain buried they stay fresh and green despite being flattened.

In due course winter finally wanes (albeit very slowly in the north and the mountains this year) and warmth finally returns to the land. As the depth of the winter snow pack steadily lessens, and as the thaw proceeds, the sasa lies patiently waiting. Likely its elongate, listless leaves are already taking advantage of wan light filtering through the snow layer above; photosynthesizing even before they are exposed to direct illumination.

The snow finally melts away, but it does so irregularly, sometimes slumping or avalanching under its own weight, sometimes slithering and draining down a slope, at other times steaming and evaporating in strong sunlight.

At these times, sudden startling noises hither and thither will likely be the sounds of sasa suddenly overcoming the last weight of snow and springing upright, sending showers of snow-ice crystals up into the air.

Hiking off-trail at this season, I face the added challenge of not knowing how strong or supportive the snow layer is across which I hike. One minute I am skimming along on snowshoes, the next I am breaking through into a subnivean cavity — while tripping over suddenly emergent sasa stems is an added hazard.

Late last May, here in Hokkaido where I live I had hiked over snow all the way to the saddle below the 1,448-meter summit of Mount Yoichi-dake — only to find that the snow covering the last 20 meters of the steep slope up to the summer trail had already thawed. Two-meter-high sasa, flattened all winter long and eager to stand again erect, was now proudly reaching for the sky. However, the stems were leaning downslope like an ancient palisade built to ward off attack by mounted knights, and as I made my assault uphill and from below I was joined in a sweaty battle.

As I scrambled, clawed and pulled my way through the stems, dead leaf fragments were everywhere, clinging sharply to my perspiration, somehow penetrating between my layers of clothing and getting into my socks and boots. It felt like I was the one being assaulted — not the one assaulting the slope.

By the time I won through to the ridge-top trail I felt exhausted; that 20-meter section through sasa was the most tiring part of the whole day’s hike. In fact, struggling through dense stands of sasa is one of my images of Hell — and that “adventure” on Mount Yoichi-dake brought to mind a long suppressed memory of once having been lost in just such a torment.

That unforgettable unpleasantness occurred many years ago while I was hiking in the Tanzawa Mountains that straddle parts of Kanagawa, Shizuoka and Yamanashi prefectures in the Kanto region of Honshu. I was following what a wiggly red line on my map led me to believe was a well-marked trail. However, though at first a broad track, this soon narrowed into a more typical hiking path. Then, somewhere along the way, it morphed into a deer trail. Slotted hoof tracks and occasional piles of nut-like droppings were clear proof. I pushed steadily onward.

By the time I realized I had lost the mapped trail I was surrounded by such dense stands of dwarf bamboo that I was forced to climb trees to see landmarks and get my bearings. But all this told me was that I had gone too far, and there was nothing for it but to battle on up to the ridge where I knew there was a trail. Hours later, well-nigh utterly exhausted, I reached it.

The enclosed atmosphere of a dense stand of sasa is as stifling and as mind-numbing as a sauna, and while laboring upslope through such a sweat-inducing horde of stems my anaesthetized thoughts circled around the absolute pointlessness of a plant whose sole purpose seemed to be to thwart my progress.

Indeed, I was so seriously jaded at the time that it was only later that I recalled pleasanter associations with sasa — mostly, admittedly, revolving around food.

The shoots of sasa are as much sought after in late spring in Hokkaido as are chunks of take-no-ko (literally, “bamboo child”) further south — and they, too, are marvelously tasty when stewed, boiled or served in miso soup.

Meanwhile, the broad fresh green leaves of sasa are considered to have antiseptic properties and have long been used as a versatile and flexible food wrapping, particularly for mochi (cakes of pounded rice). And though they are also commonly used in fancy restaurants as a contrasting decorative layer between platter and food, it is in Japan’s ubiquitous boxed lunches that most people now sadly make only symbolic contact with sasa. That’s because the slim green plastic sheets (baran) separating the elements of the meal were traditionally trimmed from fresh sasa leaves.

So, when you next open a boxed lunch and see baran in there, spare a thought for the generations of folk who foraged in the mountains trimming the millions of leaves that used to be required — and think kindly, too, of anyone who may be floundering their way through a forest of sasa searching for a trail!