Meals square: The compound at Khichan where villagers put out grain for the cranes.

Dancing Demoiselles of the desert 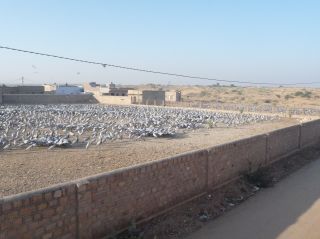 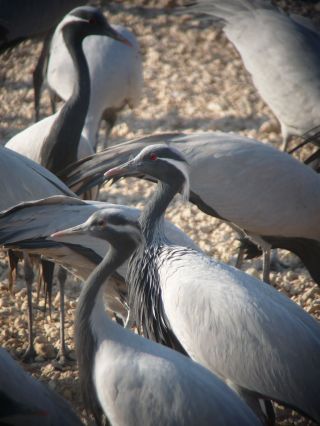 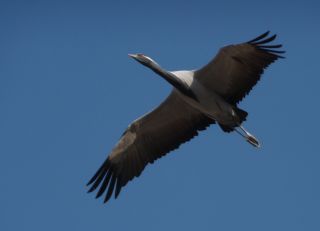 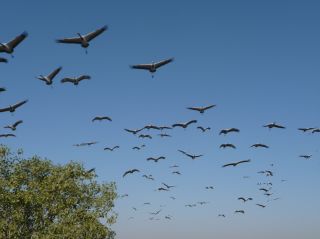 In a dry, dusty, desert landscape, the clamoring of cranes seems so surprising. I am used to the great winter assembly of more than 10,000 cranes in Kyushu at Izumi, where they congregate on winter-fallow rice fields; and I regularly frequent the winter gatherings of Red-crowned Cranes in snowy eastern Hokkaido. I have dreamed, too, of witnessing the hundreds of thousands of Sandhill Cranes that gather on migration on the Platte River in Nebraska.

This January, though, I realized another ambition when I visited the extraordinary annual gathering of Demoiselle Cranes in the desert state of Rajasthan, northwest India. There, the soil is dry, dusty or sandy. The winter vegetation is sere; scant tufts of short tawny grasses, heavily grazed by sheep and goats. There seems little to attract anything here, especially cranes.

However, it’s perhaps what Rajasthan is not that is its major draw. After all, it is neither frozen nor snow-covered, and it is not blasted by frigid winds — all of which dominate these remarkable birds’ northern, high-altitude breeding grounds.

Breeding on steppes and similar habitats from the Baltic to Mongolia, Demoiselle Cranes are used to rarefied atmospheres, but they break records when they undertake their migrations, because many pass right over the Himalayas. Indeed, they have been filmed flying way above the 8,848-meter peak of Mount Everest. Warmly insulated in their cocoon of feathers, up as high as long-haul jets fly, they rebreathe air through their lungs and air sacs to extract the most posssible oxygen from it in a way only birds can. As well, they efficiently burn stored brown body fat as their “aviation fuel” — one of whose by-products is precious water, which staves off dehydration.

Leading their young, Demoiselle Crane parents pass over incredible barriers that include not only massive mountain ranges but deserts, too, as they flee the onset of winter in the northern hemisphere’s higher latitudes. Then they spend the winter months in areas that seem harsh to us yet offer them at least roots and bulbs to eat — and increasingly the waste from harvested crops. They gather at night to roost on isolated wetlands before fanning out prior to daybreak to forage across the desert and semi-desert landscape — except for those that gather at Khichan!

This small agricultural village has a surprise up its sleeve, having become famous for its feeding of cranes in winter. Revered, in this almost entirely vegetarian state, for their monogamy and seemingly vegetarian diet (though cranes are in fact omnivorous), locals have taken the birds to their hearts.

Exact information about the Khichan cranes, however, is scant and widely varying. Unlike in Japan, where we are used to knowing the exact numbers gathering each winter and how much food is being given out to them each day, in Rajasthan it is all rather vague — so for first-time visitors it seems it might be a hit-or-miss affair.

Myself and the group of nature tourists I was leading were up really early to reach Khichan before first light, but even as we stepped from our vehicle in darkness, the carooing sound of cranes was audible to the north. In the cold air, we gingerly made our way up a house’s outside staircase to settle in on the roof for a dawn vigil.

Soon some of the distant cranes were approaching and what were obviously some of the most eager birds began passing over against the night sky. Then, as the light steadily grew, we could make out distant patterns aloft. Like Sanskrit scribblings the cranes traced lines with their flight. They came in flocks of dozens and hundreds until the sky was thick with them and their calls were loud and clear. Suddenly there was a roaring noise of cries and beating wings, and it was clear there must have been a predawn gathering at the lake just north of the village, from which they had taken to the air in a massed rush.

Beneath us lay a bare earth compound, partly walled and partly fenced. As the light grew, broad piles of grain became visible against the gravel — but despite that no living thing was present: no rats or mice, no House Sparrows and, most surprisingly, no doves. But then, as the sun came up, the doves of the village took off and began circling and gathering into an enormous flock — yet even they seemed to be waiting for a signal.

In the long pause between first sight, first light and sunrise, the less patient among us began doubting the arrival of the cranes: “Why don’t they come in?”; “There must be a better ‘restaurant’ in town.”

Then suddenly the doves descended, covering the ground and the grain until, at precisely 8 a.m., the first of the cranes touched down in their midst. Within minutes that first crane was joined by hundreds and then thousands, their sheer numbers and size soon overwhelming the doves and forcing them first across the enclosure then right out of it.

The din was astonishing, in fact almost deafening. And all the while we stood on the rooftop drinking our morning chai and eating breakfast! The scene was extraordinary. Every few minutes, new phalanxes appeared in the distance, flocks circled, the noise levels rose and more and more birds dropped in to join those on the ground. Meanwhile, nervous birds outside the compound bided their time then rose over the fence like waves crashing onto a shore to join the madly foraging ones inside.

Whenever something surprised the birds, they all lifted their heads in unison and faced in the same direction with their long black necks held proudly erect as if they were standing to attention. As they relaxed, they dipped down once more toward the food until their bodies formed patterns against the ground — gray rosettes of birds, showing only their backs and their wing plumes as their necks and heads disappeared down into the melee, surrounded by upright birds awaiting their chance to feed.

The clamoring continued, the action was non-stop and at times it seemed we were under an umbrella of cranes. Hours slipped by as we watched and listened, enthralled, and took countless photographs.

Unlike at sites in Japan, where watching cranes is a kind of spectator sport, at Khichan there was hardly anyone else around — rare indeed in India — and, for almost the whole morning, we had the place completely to ourselves. It was a long way, in more senses than a few, from Kyushu or Hokkaido.