Cycads like this can be found as far north as Kyushu's Kamaguchi Prefecture. | MARK BRAZIL PHOTO 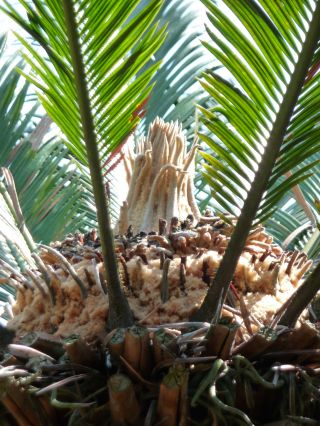 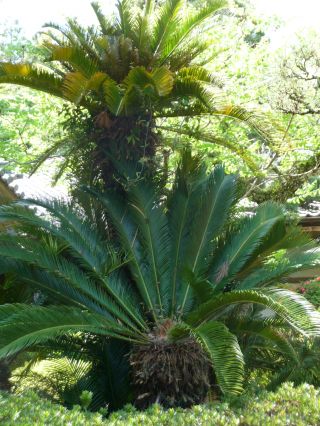 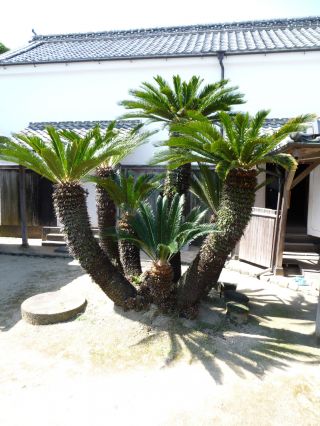 Almost two months after revelers in most of Japan began partying beneath cherry blossoms in mid-March this year, we hardy northerners in Hokkaido were still waiting patiently for warm zephyrs to waft in with a late promise of spring.

When I returned home on May 18 from travels brightly punctuated by azaleas in southern Japan and South Korea, the first cascade of magnolias, mountain cherry blossoms and forsythia awaited me. Having so recently been in the broadleaved evergreen forests of the south, I was in seasonal and botanical shock to suddenly find myself back in the cool boreal forests of northern Japan.

Tree blossoms that were just breaking in Hokkaido had long since fallen in Yamaguchi Prefecture on the western tip of Honshu; and swallows in Ehime Prefecture on Shikoku had had nestlings on the verge of fledging, whereas in Hokkaido they were barely nest-building. Meanwhile, irises were blooming, standing brightly at attention in Oita Prefecture on Kyushu, but their buds were weeks from bursting up here.

Despite the fact that Japan stretches along the Pacific coast of Eurasia between eastern Russia and Taiwan, and despite there being a three-hour time difference between Yuzhno-Sakhalinsk in Sakhalin and Taipei in Taiwan, this country boasts just one national time zone from Soya Misaki (in sight of Sakhalin on Hokkaido’s northern extremity), to Yonaguni — its southwesternmost island just 111 km from Taiwan.

Yet phenologically, these extremes of Japan are not merely hours apart, but weeks or even months. Whole seasons separate north from south, with spring raising its colorful rebirth in Okinawa while winter snows reign supreme, blanketing Hokkaido.

As if these season-spanning distances were not enough to spread a natural confusion, other distances — those straddling the evolutionary timescale — are almost too epic to contemplate, yet they also span these isles.

On my most recent visit to southwestern Japan during May, I was struck by vibrant hints of the Jurassic Period 200 million years ago — and beyond — in the form of some strange glossy-leaved, palmlike plants known as cycads, or sotetsu in Japanese.

Back in the Jurassic Period — which, interestingly, gets its name from the Jura Mountains straddling the Franco-Swiss border, where limestone strata from the period was first identified — reptiles were predominant, the first birds were evident and ancestral mammals were playing diminutive bit parts backstage.

That bygone time is often referred to as the Age of the Cycads; then they were a common part of the flora, and no doubt fed many of the extinct mega-herbivores of the day known as dinosaurs. Today the genetic descendents of those self-same plants survive in much the same form — and one of them at least calls southern Japan home.

As I strolled once more through the 17th-century Kikuya merchant’s residence, my favorite house in Hagi, Yamaguchi Prefecture, I reveled in glimpsed views of small but elegant gardens from each of the rooms — but was struck most this time by the form of a massive plant in the courtyard.

Somehow, I had overlooked its magnificence on earlier visits, no doubt distracted by the architecture of the house. The plant’s multiple trunks springing from a narrow clumplike base arch out only slightly before rising almost vertically to heights ranging from barely more than half a meter to over 2 meters.

At first sight the stout, branchless trunks appear shaggily fur-covered, but on closer inspection they seem spine-coated. Atop each woody trunk, and nowhere else, are crowns of long, stiff, compound evergreen leaves that rise and fan out from the trunk, appearing both palmlike and fernlike though they are close relatives of neither.

Slow-growing and long-lived, some specimens are thought to have survived more than 1,000 years, and these in the Kikuya Residence garden may well date back to the house’s construction.

As a group, the cycads are commonly considered “living fossils,” their lineage little changed over more than 250 million years. Their ancestral distribution suggests they were at home in the ancient precursor continent of Pangaea, long before Laurasia and Gondwana broke apart, and long before flowering plants or conifer trees evolved. Cycad fossils have even been found in what we now call Antarctica.

The precise species present on Earth today actually evolved much later, during a period of relative cycad flourishing, some 12 million years ago, leaving 300 or so species surviving mostly in tropical and subtropical areas of Africa, Australia, Asia, the Pacific Islands and the Americas — and that warm range just includes southernmost Japan.

Because of their architectural form and considerable size, mature cycads resemble living sculptures capped with glossy, verdant foliage, making them popular as a landscape feature in gardens well beyond their natural range. They may be popular, but they are definitely not for tree-huggers. Their rosettes of enormous leaves grow directly from their trunk tips, and as they fall they leave their seriously spiky leaf bases behind. What’s more — they are poisonous.

Japan’s native cycad, Cycas revoluta, occurs naturally only in the Ryukyu Islands arc from southern Kyushu to Taipei, and also in the warmer locales of Kyushu’s southernmost Kagoshima Prefecture. In these frost-free subtropical regions, sotetsu can often be found on coastlines where they favor rock faces in full sun.

These cone-bearing, seed-producing plants are actually related to the pines. Each male plant bears pollen-producing cones, whereas females carry ovule-producing megasporophylls, and they rely mostly on beetles for pollination.

Nowadays, Cycas revoluta, which is one of the most widely cultivated cycads, can be found in gardens wherever pockets of local warm climate allow — such as in Hagi. Japan’s oldest specimens tend to be found where they have been planted, and protected, at temples and shrines. Although my most memorable encounter with cycads was in an arid part of northern Australia, here in Japan I recall being bewildered by them first on Amami Oshima, along with equally amazing tree ferns.

The Japanese Sago Palm, as Cycas revoluta is also known in these parts especially, has less fortunate associations than mine. Where it is best known, in Okinawa Prefecture, it was something of a last resort when famine struck, as in the times of dire poverty following World War I that led to so many Okinawans emigrating in the 1920s — in a period that came to be known as sotetsu jigoku (cycad hell).

Cycads can be eaten, after a fashion. The pith can be used as a source of flour, and in some countries their seeds are also consumed — although not without special treatment as they contain a toxin requiring that they be ground and soaked first. Soaking the starch from the stem or the seeds helps leach out the potent toxin known as cycasin, which can cause death. Apparently the seeds are so toxic that ingesting just one is sufficient to kill a dog. However, mashing the stems then fermenting the resulting pulp is a way of removing the toxin, and similar treatment of the seeds in the Ryukyus has allowed the making of edible cakes known as sotetsu mochi — and even of sotetsu miso —though anyone eating it must necessarily put all their faith in the maker’s skills and attention to detail!

If you are in southern Japan, do look out for this strangely attractive, though deadly, plant with an ancient pedigree; it is well deserving of attention.