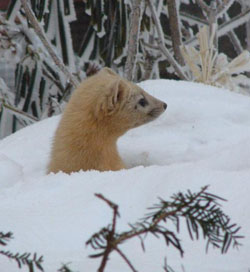 SABLES AND THEIR ILK

Movement in the snow; the surface bulges, bursts, and out pops a creamy-faced creature with round black eyes like tiny beads and a stare that seems to say “I can kill.”

Powder snow dusts its head as it looks around. Then it’s gone, like a periscope submerging into the snow, the face disappears in an instant. A few meters away it pops up again, first the face, then the head and neck, then finally the whole creature emerges from beneath.

Lithe and long with short stout legs and a long bushy tail, it has as soft and gentle a face as you could imagine — but one that most definitely belies the beast’s true nature. Its tiny black button nose, black beady eyes, short rounded ears and tapered face give it a fox-like appearance, but that horribly overworked word “cute” rises unbidden into my mind.

This creature is a sable, to scientists it’s also known as Martes zibellina, and it belongs to the Mammalian family Mustelidae, which is the largest family within the Order Carnivora. Yes, this cute-faced creature is a predator that likes nothing more than warm meat, and its relatives include some 55 species or so of otters, badgers, weasels, stoats and mink.

One relative, the least weasel, has been described as the most ferocious predator in the British Isles, and the stoats, martens, minks and sable rank alongside as highly active pursuit-predators of the undergrowth. Like high-speed, heat-seeking missiles they home in on warm-blooded prey such as mice and voles; woe betide any “Wee Sleekit, couring, timorous beastie” (from Rabbie Burns’ 1786 poem, “To a Mouse”) that pauses even for a moment in their sights.

Japan is well blessed with Mustellids, being home to 10 species, though not all of them are native here.

One, the Japanese marten, known in Japanese as ten, ranges widely in Kyushu, Shikoku and Honshu. The sable, or kuroten, lives in Hokkaido. The Japanese weasel, or itachi, is a little smaller, but lives in the same range. The Siberian weasel, or Chosen-itachi, a continental species that used to occur in Japan only on Tsushima Island, has been introduced and spread through Kyushu, Shikoku and southwest Honshu. The least weasel, or iizuna, ranges in Japan through northern Honshu and Hokkaido, but this is the same species I mentioned that terrorizes British hedgerows and woodlands.

The stoat, ermine, or okojo, occurs from highland central Honshu north to Hokkaido, and also extends its global pawprint west to Europe like the weasel. It is best known for its white winter coat and contrasting black tail tip.

Then there is the American mink (America-minku), a voracious predator introduced to Hokkaido — and one can only wonder how many Japanese crane chicks have been lost to this wetland-loving species. The mink is occasionally mistaken for the river otter, or kawa-uso, but that species has been extinct in Hokkaido for a very long time.

Meanwhile, the sea otter, or rakko, is an unusual member of the family, being not only aquatic, but also marine. Alas, like the river otter it was exterminated by hunters, although an expanding population in the Kuril Islands has begun to extend its range southward, and sea otters are now occasionally sighted off the Shiretoko and Nemuro peninsulas of Hokkaido in winter.

The Eurasian badger, or anaguma, is the last member of the family in Japan. Like the Japanese marten and Japanese weasel, it occurs in Kyushu, Shikoku and Honshu — though not Hokkaido. But unlike them, it is not a long, lithe predatory creature, but more of a stout, heavy-set omnivore — and one which hibernates during the winter.

We can think of the Japanese marten and the sable as counterparts in Japan: Whereas the marten lives in the three main southerly islands; the sable, or kuroten, lives only in Hokkaido. Also, whereas the Japanese marten is a golden-brown animal with a black face, black legs and a brown tail, the sable is a pale, creamy-yellow color, almost white on the face and with black feet and lower legs and a black tail. The carnivores are similar in size, with the marten measuring 60 to 65 cm from nose-tip to tail-tip, and weighing 1.1 to 1.5 kg, while the sable measures 67 cm long and weighs in at 1.5 kg. But to my mind, it is the sable that smacks of wilderness, and conjures up images of the immense Russian taiga forests that comprise much of its natural range.

To hibernate or not, that seems to be a question that has not bothered any of the Mustelidae, other than the badger.

For the predatory species it just isn’t an option, as they burn so many calories just staying alive that they need to regularly top-up with fuel — hence the snow-burrowing antics of the sable.

However, its thick winter coat has been its undoing in the past, and its willingness to enter holes, nooks and crannies in search of its rodent prey has meant that it has fallen prey itself to human hunters, ever-ready with noose, trap and snare.

But hunting rodents beneath snow is a specialist art.

I recently watched a red fox patrolling out across a vast snowfield in eastern Hokkaido; after trotting back and forth across the field, its ears suddenly pricked up, its whole body appeared tense, it rushed forward a little then, suddenly, it performed a four-footed leap into the air, pouncing down with all four paws bunched on one spot. With its neck arched and its face pointing straight down, its leap turned into a mad digging scrabble and its foreparts disappeared down into the snow layer; moments later it came up with a vole in its mouth, perhaps having burst through the roof of the vole’s winter quarters to snatch it from its nest.

The sable hunts in a very different fashion; as almost snakelike it can burrow, twist and turn through the snow in pursuit of rodents living in the subnivean layer — the interface between the ground and the bottom of the snow layer — then again, above the snow layer it will chase down animals even larger than itself, such as the mountain hare (yuki-usagi).

Scent is vitally important to predators such as the marten and sable, which is why they are occasionally attracted to bird tables or to carrion. I spent an entrancing, albeit freezing-cold evening recently with not one but several sable. They were chittering and mewling to each other, dashing back and forth, chasing each other across the snow, until suddenly one disappeared, not down a hole, but up into the trees. The next moment, three different animals were in view dashing back and forth through the branches in front of me, and a fourth was still chasing through the snow. They were nimble like squirrels in the trees, running along branches and leaping across great gaps between the trunks. From my perspective they were: fascinating, agile and (yes, I hate to say it again, but when they paused to stand up on their hind legs and peer about with those bright, shiny eyes) most definitely . . . cute.

But these are creatures that are not only able to pursue and tackle prey ranging from small rodents to heavy hares, but they are also fast enough and lithe enough to be able to chase down native red squirrels as they dash about the forest canopy.

It was a great privilege to meet them on their own ground on a wintry night in eastern Hokkaido.