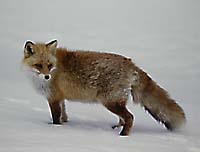 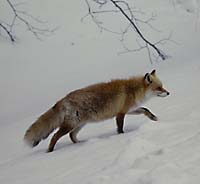 Camping is a wonderful way to unplug from the computer and e-mail, catch up on sleep, and escape the never-ending round of deadlines and commitments. While summer and autumn camps offer opportunities to “shoot the breeze” around a campfire, on dark evenings in the winter there is nothing more one can do but rest in a warm sleeping bag and listen to the night sounds.

Camping in winter sharpens one’s senses. When the temperature crosses that magical threshold — zero degrees — when the sides of streams ice over, when overnight frosts linger into mid-morning, and when the elongated crystals of needle-frost protrude from exposed soil, your sleeping bag screams out to be used.

Then, cocooned in warmth, but with your head just centimeters above a hard frost, night-time noises appear to be much closer. In the cold night air, sounds are clearer, as if somehow etched into the frosty black glass of the night.

On a recent, late-November camping trip to the Akan National Park in Hokkaido, I pitched my tent and then set off to observe the birds of the area, checking the whooper swans, newly arrived from Siberia, and looking out for deep-voiced ravens from Kamchatka. As dusk fell, the temperature plummeted. Pinpoint crystals of frost were glinting on the leaves of the sasa dwarf bamboo carpeting the forest floor, while overhead stars were flickering through the leafless branches of the trees as they stirred in a chill evening breeze. When I returned to my camp I found that an early evening frost had stiffened my tent, but it is wonderful what modern fleece materials and a down sleeping bag can do in the comfort department.

I settled down, expecting a blissfully long sleep, but suddenly, even before I’d begun to doze, there was a loud rustling in the sasa. It sounded huge and close, and thoughts of a late-prowling bear crossed my mind. But then I realized these were no footfalls, and that the cold, the utter silence and the close proximity were no doubt amplifying the sound. So, some mid-size animal then — but which? — a sable, or a tanuki raccoon dog?

Then, out of the darkness came a heart-stopping thump on the tent just above my head. An animal passing in the night was one thing, but one climbing on my tent was another. I cautiously grabbed my headband torch and strapped it on, zipped open the tent and peered out. My breath rose in a plume into the chill night sky. Nothing. Then I stretched up to search the other side of the tent, and there, looking bemused in the sudden light, its bushy tail raised, its nose down, was a fox peering in my direction. I watched it for a while until the cold drove me back to the warmth of my sleeping bag. I assumed my sudden appearance and the bright light would have been enough to send it on its way, and that it was now off prowling in some other part of the forest.

I was taught in Canada never to keep food in a tent in bear country, so there were no snacks to attract this fox, yet something drew it back repeatedly through the night. I woke once to another battering on the tent. I battered back. I woke again to a rustling beneath the flysheet — ah, it wants to join me I thought as I drifted back to sleep. Another time there was a disturbing ripping sound — oh dear, there’ll be a hole in the flysheet, I thought sleepily. Then after two or three more rustling visits, during which the noises at the flysheet made me think it may have brought a friend to keep it warm, the sounds ceased, were not repeated, and I fell into a fitful sleep.

A little before dawn I woke to hear an owl calling softly. The end of November is a strange time for an owl to be heard in Hokkaido, and it was an unfamiliar species; I lay awake mulling over the possibilities, crossing them off in my mind, until there was only one left — I’ll call it mystery owl!

Then as first light began to filter in I heard the full-throated whistle of a sika deer stag. There was a rutting ground near my camp, a muddy spot scraped and trampled by many hooves, and I had hoped that one might return at dawn. This one was far off, but its call was enough for me to imagine its proud antlered head raised as it gave voice, calling any wandering females. I listened as the first birds stirred; somewhere a woodpecker tapped, and I could hear the contact calls of a party of small birds. First light, first mammals and birds — it was time to get up.

Looking up into the dome of my tent all I could see was the whiteness of frost crystals covering the inside. I dressed quickly, planning to take an early morning walk along the edge of the woodland. I reached for my shoes — but they were gone! Instantly the rustling antics of the cheeky fox crystallized. In my sleepy state during the night I had assumed it was after shelter, or food — not that it was interested in my footwear! The flysheet was thick and hard with frost, and it cascaded down like soft snow as I unzipped it. I had socks, winter clothes, but no shoes; there was nothing for it but to step out of my tent into the frozen grass and search for them. Luckily, one lay obviously in sight, but as I quickly pulled it on I found that both ends of the laces had been chewed away. The fox had not only carried it off, but snacked on it too. I then hopped and limped about on the frozen ground looking for the other, which I found thickly covered with frost near the forest edge. When I returned to my tent I realized that this fox had some kind of string fetish — the ripping sound I’d heard in the night was the parting of guy ropes, as the fox had chewed through them. It seems that the perils of winter camping stem not so much from the cold as the attentions of the local wildlife!